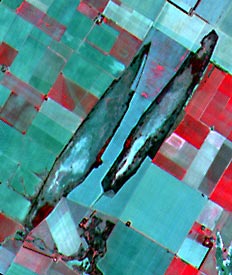 These two Rio Cuarto craters, nicknamed 'the Twins,' measure 3½ kilometers long. At least three meteorites have been recovered from their flat, partly vegetated floors. This false-color image was recorded by the EOS-Terra satellite.

A controversy is brewing over the origin of several unusual depressions in the Pampean plain of northern Argentina. For the last decade planetary scientists have considered a cluster of large, elongated pits near Rio Cuarto to be unique impact craters, gouged by a chunk of asteroid that glanced obliquely through the atmosphere and broke into pieces just before striking the Earth.

The idea for such an impact swarm arose in 1991, when an expedition led by Peter Schultz (Brown University) and Argentine air-force pilot Ruben Lianza discovered samples of fused soil and even intact meteorites within the teardrop-shaped depressions. Subsequent laboratory work suggested that the Rio Cuarto event must have occurred within the past several thousand years.

The impact hypothesis recently received its most serious challenge from a team led by Phil A. Bland (Open University, London). In the May 10th issue of Science, they detail a pair of meteorites found within the putative craters that not only have different makeups but also appear to have arrived on Earth 36,000 and 52,000 years ago — far longer than the age of the depressions in which they were found. Bland's team also contends that the strange depressions, up to 4½ kilometers long and 1 km wide, look much like hundreds of other smaller features scattered throughout the region — a situation far too unlikely to be caused by a single collisional event. 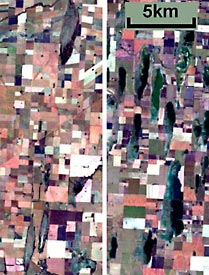 The Pampean plain near Rio Cuarto in northern Argentina bears elongated scars (left) that are thought to be unique craters from an oblique impact several thousand years ago. But their shape mimics that of other depressions in the region (right) shaped by the wind.

This would suggest that the Rio Cuarto craters are not craters at all but rather long hollows carved and shaped over thousands of years by prevailing winds. In the process, the gradual removal of material exhumed meteorites that had fallen to Earth long ago. "I'd love them to be low-angle impacts," Bland told Sky & Telescope, "but I just don't think the evidence is there."

But what of the fused-glass nuggets found by Schultz and Lianza? Bland says more of these have turned up at a site 400 km farther south, which suggests to him that they all came from a much bigger impact about 480,000 years ago. Such a catastrophic event would have splashed glassy droplets (known as tektites) over a very wide area and left behind a crater roughly 5 km across, which presumably lies hidden beneath the Pampas or offshore in the Atlantic. As terrifying as the oblique impacts might have been, observes H. Jay Melosh in the same issue of Science, "[Bland's] view of a shower of hot glass over a region as large as Texas suggests a far more lethal event half a million years ago."

Not everyone finds Bland's work convincing. "I don't believe it," says cratering expert Christian Koeberl (University of Vienna). Koeberl says the glassy melt found within the depressions is, isotopically, "practically identical" to the surrounding soil, and its age (as determined by two different methods) is only 4,000 years — a far cry from a half million. Moreover, Schultz says he's now found four meteorites in the Rio Cuarto craters, and they're all the same class of chondritic stone.

Resolving the origin of these controversial features may take years of careful field work and laboaratory analyses. Schultz contends, for example, that the Rio Cuarto craters have charateristics unlike those of the region's wind-deflation structures. But Bland counters, "I don't know what criteria he's basing that on. We couldn't detect any differences."