New observations of the Small Magellanic Cloud have only heightened the mystery surrounding a decades-long cosmic conundrum.

The universe still has a lithium problem. 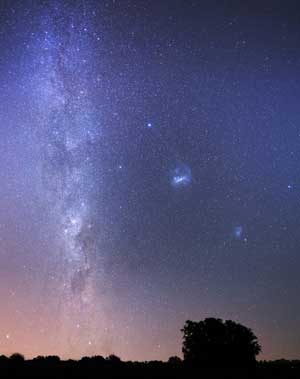 The Small Magellanic Cloud (smaller of the two fuzzy dots to the right of the Milky Way's dusty disk) is a dwarf galaxy currently orbiting the Milky Way. A new study suggests that it, too, has far less of the element lithium than astronomers think it should.

That’s the implication of a paper in this week’s Nature by researchers from the University of Notre Dame and the University of Illinois at Urbana-Champaign. Processes just after the Big Bang ought to have created certain amounts of elements such as hydrogen, helium, and lithium. Astronomers already knew the universe has far less of the isotope lithium-7 than it should — studies of the old stars that surround the Milky Way in a halo show that they have at most one-third the amount of lithium-7 predicted by careful models of what happened in the newborn universe. Some stars in the Milky Way’s disk do have more lithium-7, but such stars are generally thought to be younger than the halo stars and are therefore polluted by heavy elements made later in the universe’s history.

The lithium is a major thorn in astronomers’ sides, because other elements seem to match predictions just fine. Any process that could destroy the lithium would need to leave these other elements unscathed, and that’s a tricky proposition.

To dig into this problem, J. Christopher Howk (University of Notre Dame) and his colleagues measured the lithium outside the Milky Way. They pointed the high-resolution UVES spectrograph on the 8.2-meter Very Large Telescope at a massive, young star in the Small Magellanic Cloud, a dwarf galaxy orbiting the Milky Way. Light from the star passes through the gas and dust lying between the star and us and picks up the spectral fingerprints of the elements it encounters.

That interstellar material has about one-fourth the amount of heavy elements as the Sun. The value is at least 10 times higher than the heavy-element levels in many halo stars, but it’s a step in the right direction to studying primordial abundances, Howk says. The team detected an amount of lithium-7 that’s a bit lower than predicted but that could be consistent with the theory of big bang nucleosynthesis.

This might sound like a solution to the lithium problem, but it’s not. The amount of lithium should only go up with time as more stars create heavy elements and then spew those elements into space as the stars age and die. If the Small Magellanic Cloud now has about the same amount of lithium as big bang nucleosynthesis predicts, it had to begin with less.

“That worries us a bit,” Howk says. “There are a few ways to tune things to get out of having big bang nucleosynthesis be wrong, but they start to become a bit uncomfortable.”

Miguel Pato (Technical University of Munich, Germany) and Fabio Iocco (Oskar Klein Center for Cosmoparticle Physics, Sweden), who have worked on the lithium problem, note that an interesting point in the new paper is the hint Howk and his colleagues detected of another isotope of lithium, lithium-6. If that hint is the actual level of lithium-6 in the interstellar cloud the team studied (and Howk stresses that the data are not strong enough to make that claim), it would suggest that there’s about a thousand times more lithium-6 present than is predicted by big bang nucleosynthesis. Because the theory predicts how much lithium-6 there will be compared to lithium-7, the amount of lithium-6 could reveal the mechanism that made the lithium-7 and determine just how much of it originated in the universe’s first few hours. Howk says his team has more observations planned for this November to help pin down the amount of lithium-6 present.

Reference: J.C. Howk et al. "Observation of interstellar lithium in the low-metallicity Small Magellanic Cloud." Nature, 6 September 2012. (Abstract available only — if I see a version of the full paper, I'll add the link.)

This is interesting. Remember too S&T back in Jun/12 published another problem with BBN lithium - The Universe’s Lost Lithium,
http://skyandtelescope.org/news/home/Universes-Lost-Lithium-159192855.html

The big bang model in the period 1E-44 second after the big bang until 1 second after has many areas that are difficult to verify. BBN lithium is one of those areas we are seeing. The big bang does not explain the origin of dark matter which means perhaps 80% of the universe is not explained by big bang and BBN.

A version of the paper in Nature, with a slightly different title, has been posted on arXiv: http://arxiv.org/abs/1207.3081

A star in M4 is hoarding all of the lithium:
http://www.eso.org/public/news/eso1235/

Camille Carlisle, this article is interesting, but I wonder about your statement, "The amount of lithium should only go up with time as more stars create heavy elements and then spew those elements into space as the stars age and die." While this is certainly true of elements heavier than Li, is it not true that Li in the cores of main sequence stars is quickly consumed? I thought that Li production is very rare today, with the possible execption of the accreting black hole mechanism that you reported on in the article that Rod references.

Lou, thanks for the reference. It confirms what thought I had read about normal stars ditroying their lithium over time, with one weird exception. Maybe the one star that
ESO reports as having abundant Li is in the path of a jet from an accreting black hole!

I have always seen Lithium as a transitional element in the sum of balance in the U. Rather than look for the numbers to match what they"should" be let's look at where the flux of the transition is at it's junction points. That may give us a positional reference as to where we are in the time line.

I seem to remember something about the Castle Bravo thermonuclear testing at Bikini Atol in the 50's
They added Lithium 7 for some reason to attempt to slow the explosion down. But it ended up having the very opposite effect resulting in a far bigger blast then expected and used up the Lithium
H-bomb and a star do have some similarities I wonder if there is some connection

It appears that writers for S&T don't read each others articles. This article states a couple of times that the Small Magellanic Cloud orbits the Milky Way. Yet an article by Robert Zimmerman in the October paper issue of S&T makes the point that neither Magellanic cloud has ever orbited the MW, and that astronomers aren't yet certain that the Clouds will be captured into orbit by our galaxy. So which is it?

Cliff S, your interesting story about Castle Bravo was a little hard to believe at first, because adding lithium to a hydrogen bomb seemed like adding fuel to a fire in an attempt to cool it off. Wikipedia confirms your tale however. Here’s the connection to astrophysics; in stellar interiors Lithium occurs in one of the lesser branches of the reactions in the converting of hydrogen into helium. (called the p-p-II chain) First Li7 is either present from the star’s beginning or produced when an He3 and an He4 fuse. The Li7 then readily absorbs a proton, and promptly splits into two He4. I believe that the Li7 – proton fusion occurs at the lowest temperature of all fusion reactions, therefore it would be the first to occur in newly forming proto-stars. In some brown dwarfs this may be the only reaction to ever occur at all. Maybe it was Dr. Strangelove who suggested adding the Li7 in the Castle Bravo test.

Solly -- Thanks for following us so carefully! I did read Zimmerman's article before writing this post, and I was trying to walk the line between explaining to readers the SMC's relation to the MW and not implying that the SMC has *always* or *long* been orbiting the MW. Zimmerman writes at the end of his article, "many astronomers now think [the Magellanic Clouds] have been recently captured by the Milky Way and from now on will be traveling in an extremely elongated orbit that has just made its closest approach to the galaxy" (page 33). That statement doesn't contradict the statement that the SMC orbits the MW.

Given differences in element abundances reported among stars in M4 and other GCs, past, unseen generations of stars are often invoked to explain the differences.

The Blogs seems to be a very good energy source.and retrobut I've in research about this topic retrobut. I've read your Post and i gathered Lot of information which i was not familiar.Good Work