The twin Van Allen Probes have only been spaceborne for 60 days, but they’ve already returned heaps of data about the radiation belts, whose "killer electrons" endanger satellites. 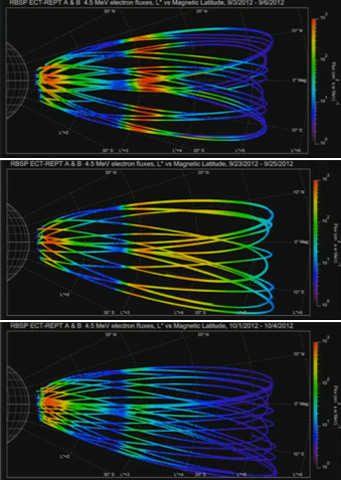 The Relativistic Electron Proton Telescope (REPT) turned on just two days after launch, mapping electron fluxes as the Van Allen Probes sped through the radiation belts. Each line in the diagram shows one orbit, and the color bar on the right shows the intensity of electron flux. Scientists watched the the outer electron belt spread and fade dramatically over the course of one month. Observing, and then predicting how the radiation belts react in response to solar activity is one of the goals of the Van Allen Probes' mission.

Much like a president’s first 100 days, the beginning of a mission can say a lot about what’s in store for the years to come. The Van Allen Probes have only been spaceborne for two months, but they complete an elongated orbit every 9 hours that takes them speeding through the two radiation belts encircling the Earth. In their twice-daily journey, they have already returned more data about the Van Allen belts than scientists have been able to access over the past 50 years, since the belts were first discovered.

According to reports from the American Geophysical Union, the probes are already showing far more dynamic belts than expected, mapping out particle energy distributions to greater accuracy than ever before, and even studying the origin of the musical “dawn chorus.”

Scientists already knew that massive solar eruptions of radiation and energetic particles shape the radiation belts. But even when the Sun isn’t acting up, scientists have been surprised to discover that the belts are changing shape dramatically over short amounts of time, reports Daniel Baker (University of Colorado, Boulder). Understanding why and how the belts react to the solar wind is one of the many goals of the two-year-long mission. The behavior of the outer electron belt in particular (seen to spread and fade dramatically in the plot above) is of practical importance, since GPS satellites spend considerable amounts of time in that environment.

In addition to mapping the belts themselves, the probes are also starting to shed light on the long-studied, but not well understood “dawn chorus,” named for the chorus of birdcalls often heard at dawn. Listen to the sound of “chorus” here. These radio waves course through the belts on the “dawn” side of Earth — the quarter of Earth shaded in dark that faces the coming sunrise. These waves accelerate particles much like an ocean wave pushes a surfer in front of the crest.

Ham radio operators have long listened in on the dawn chorus, but the Van Allen Probes are now close enough to measure the directions of the waves, tracing where they come from and where they're going. And since the probes can complete multiple orbits during a geomagnetic storm, they’ve been able to record the waves’ rise and fall as storm activity passes them by. Intriguingly, the probes’ high-resolution recording has detected something besides the whistling birdcalls — “crickets” creak in the background too. The origin of the cricket sound is poorly understood.

The Van Allen Probes’ initial data hasn’t solved any mysteries — yet — but the first 60 days are promising. “This is the mission we’ve been waiting for for 50 years,” says deputy project scientist Nicky Fox.