After 35 years in space, NASA's long-distance interplanetary probe finds itself on the cusp of leaving the Sun's magnetospheric bubble.

When launched in 1977, Voyagers 1 and 2 headed out on trajectories that would eventually carry them far beyond their intended outer-planet targets. Mission scientists dreamed that some day one or both probes would punch through the outer limit of the heliosphere, the Sun's magnetospheric bubble. But back then, recalls Caltech space physicist Ed Stone, "No one knew how large the heliosphere was, and no one knew how long a spacecraft could last." 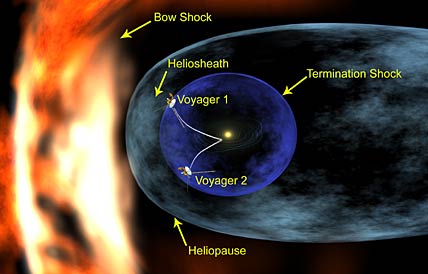 This artist's concept shows structures in the tenuous gas where the expanding solar wind meets the interstellar medium far beyond Pluto. Voyager 1 is apparently nearly across the boundary between them, whereas Voyager 2 still has a way to go.

Today, 35 years later, Voyager 1 is 11.3 billion miles from home and Voyager 2 is 9.3 billion away, respectively 122 and 100 times the Earth-Sun distance. Surprisingly, both are still inside the heliosphere — but apparently not for long. As Stone and his colleagues described at a NASA briefing yesterday, Voyager 1 has entered a new and unexpected realm that puts it on the doorstep of passing into interstellar space.

Since late 2004 Voyager 1 had been immersed in a region of stagnant flow of solar-wind particles, which in itself had not been expected. In this termination shock, explains Stamatios (Tom) Krimigis, team leader for Voyager's Low-Energy Charged particle (LECP) instrument, "The plasma just sits there like it's in a swamp." 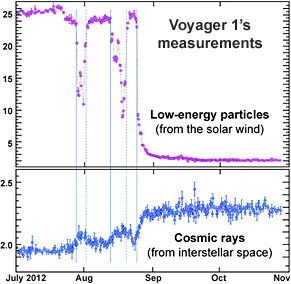 Midway through 2012, Voyager 1's instruments noted a precipitous drop in the number of solar-wind particles recorded per second — and simultaneously noted a surge in cosmic rays arriving from interstellar space.

But on July 28th, the spacecraft caught its handlers flat-footed by reporting a sudden drop in the count of solar-wind particles and a corresponding surge of low-energy cosmic rays streaming in from the great beyond. That lasted five days. Then another week-long episode followed beginning on August 13th, and by August 25th the rapid two-way flow had become the new normal. "Things have changed dramatically," admits Krimigis. "The [solar-wind] particles are a thousand times less than what we had before. We can hardly measure them."

Ordinarily this sudden shift would have been taken as a clear signal that the craft had entered interstellar space — except for one thing: the the surrounding magnetic field intensified dramatically but its orientation remained rock steady, aligned east-west roughly along the ecliptic. (In contrast, the orientation of the interstellar field is expected to be roughly north-south.)

So instead the mission scientists believe the heliospheric and interstellar magnetic fields have somehow become linked in a way that allows charged particles to flow freely inward and outward. They imagine this as a kind of "magnetic highway" to interstellar space. The video below shows what's likely going on.

Stone guesses that this unexpected zone at the heliosphere's limit is narrow, and that Voyager 1 should punch through it in a few months' to a couple of years' time. And he expects the spacecraft to still be operating when that happens. Four instruments (its cosmic-ray and plasma-wave detectors, magnetometer, and LECP instrument) are still taking data, and the remaining handful of mission engineers at NASA's Jet Propulsion laboratory figure there'll be enough electricity to run all four until about 2020. 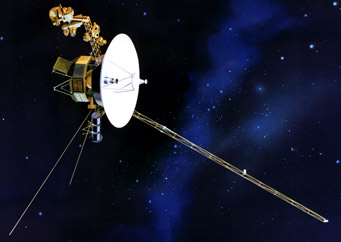 Billions of miles from home, the twin Voyager spacecraft are no longer taking pictures — but both are still collecting data on the charged particles and magnetic fields that surround them. The two craft were launched 16 days apart in 1977.

Voyager 2, meanwhile, has seen similar changes in the magnetospheric environment around it — but nothing like those experienced by its more distant twin. It appears to have some distance yet to go before reaching this "on-ramp" to interstellar space.

Historical footnote: The Voyagers were designed to study the four giant planets and their environs, so it came as a surprise to many in 1972 when NASA managers picked Stone — a well-respected magnetospheric physicist — as project scientist. But in hindsight it was an inspired choice: here we are 40 years later, and he's still in the driver's seat. "This was not an afterthought," he says of Voyager's long-distance discoveries. "This was something we hoped would happen some day."

These two modest robotic spacecraft and their earthbound team of scientists and engineers have been exploring the unknown reaches of our solar system for 35 years. If anybody doubts that robots yield a much greater scientific return than human missions, consider the Voyagers.

These two modest robotic spacecraft and their earthbound team of scientists and engineers have been exploring the unknown reaches of our solar system for 35 years. If anybody doubts that robots yield a much greater scientific return than human missions, consider the Voyagers.