A free-floating planet dubbed PSO J318.5-22, just 80 light-years from Earth, has a mass only six times that of Jupiter.

Back in 1998, the astronomy world was abuzz with the apparent discovery, thanks to the Hubble Space Telescope, of a planet racing away from its parent star and into the vastness of interplanetary space. Later observations showed that this runaway object, designated TMR-1C, was most likely just a background star. Yet, even today, astronomers really aren't sure what TMR-1C is.

What's clearer now is that free-floating planets are probably very, very common in our galaxy. In fact, just last year Stanford researchers proposed that they could outnumber stars by up to 100,000 to 1. This jaw-dropping estimate is a statistical extrapolation based on a handful of unbound planets — just 10, in fact — found using microlensing techniques. 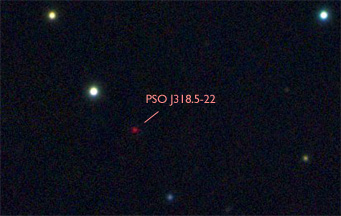 The free-floating planet PSO J318.5-22, as imaged by the Pan-STARRS 1 telescope. Extremely faint, the planet has about six times the mass of Jupiter. Most of its energy is emitted at infrared wavelengths. The image is about 2 arcminutes across.

Now an international team led by Michael Liu (Institute for Astronomy, University of Hawaii) has released images of a young planet that's drifting through space on its own. Dubbed PSO J318.5-22, it's about 80 light-years away in the direction of southeastern Capricornus.

The observers found it in 2011 using the Pan-STARRS 1 telescope atop Haleakala on the Hawaiian island of Maui. They weren't looking for rogue planets but rather the exotic stellar wannabes known as L-type dwarfs.

PSO J318.5-22 turned up in that survey, but follow-up observations showed that it's far redder and dimmer than other L-type candidates. In fact, spectroscopic scrutiny conducted this past summer suggests that this lonely object has much in common with young massive planets enveloped in dusty cocoons. The team's findings will appear in Astrophysical Journal Letters.

"We have never before seen an object free-floating in space that that looks like this," Liu notes in an Institute for Astronomy press release. "It has all the characteristics of young planets found around other stars, but it is drifting out there all alone.” 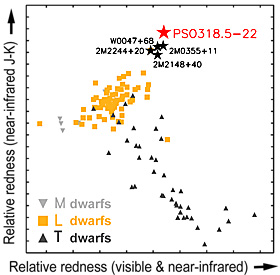 This is not the first planet-mass object to be found drifting through interstellar space. But the other candidates are thought to be sub-brown dwarfs, literally failed stars that couldn't pull together nearly enough mass to trigger fusion in their cores.

Liu and his colleagues insist that the spectrum of PSO J318.5-22 is distinct from those of other L dwarfs, and its calculated temperature, roughly 1160 Kelvins (1630°F), is significantly cooler. They estimate that it has a mass only 6½ times that of Jupiter and must have formed just 12 million years ago. Based on its motion, it probably escaped from one of the members of the Beta Pictoris Moving Group, a clutch of 17 young stellar systems averaging about 115 light-years from Earth.

If they are 100,000 times as numerous as stars, one would think that in the last couple billion years, one would have wandered through the inner solar system and scrambled the orbits of the planets.

On the other hand, the fact that we aren't scrambled indicates how much space there is between objects.

"I have seen the dark universe yawning
Where the black planets roll without aim-
Where they roll in their horror unheeded,
Without knowledge or luster or name."
(H. P. Lovecraft - 1918)

Justin, in addition to the vast size of space which Tom poetically pointed out, here’s other points to ponder; The vast number of these rouge planets will not be the massive Super-Jupiters that can wreak solar systems, because the mass range for this class of objects extends from about 12 Jupiters clear down to dwarf planet Pluto sized objects. Usually in any class of objects the small greatly outnumber the large, and wouldn’t this logically be the case for rogue planets too? Also, the 10^5 rogues per star amount was the extreme upper limit, and there are many reasons (including your point) to doubt that the actual numbers come close to this maximum projection. In any case our system might have had one or more visits from these wanderers, but if so it would be much more likely that the visitor(s) weren’t massive enough or near enough to do any damage.

It’s nice to see actual observations of this class of astronomical object start to come in. But now that we know that, whatever their numbers are, they do exist, the question of what to call them demands an answer. Technically, according to the official IAU definition, these objects aren’t planets, because part of their definition is that the object orbits a star or a stellar remnant, which these don’t. However, in whatever you read about these objects in the press or even in scientific literature we always have the word planet used to describe them. Many adjectives are used, such as rogue, orphaned, lonely, etc., but these are always followed by the word “planet”. Isn’t it obvious that these planet sized objects really are planets? The origin of the word planet is “wandering star”, and while these aren’t stars they clearly are wanderers. The technical definition of the word planet needs to be broadened to include these objects.

Wow, a big young planet enshrouded in dust, probably a member of the Beta Pictoris moving group, where we're looking for other planets being born from dusty disks. It would be really cool if we could find a disrupted planetary system in the Beta Pic moving group and run the movies backwards to see if perhaps this planet was ejected from that solar system.

There's some of that missing matter that has forced astrophysicists to invent "dark matter" out of empty space.

Sure, there's about 0,1 percent of that missing matter that has forced astrophysicists to invent "dark matter" out of empty space.

Wesley, I wouldn't say that astrophysicists invented dark matter. They simply named a phenomenon for which we do not yet have a clear explanation, namely that there is a lot more mass in the universe than we can account for with normal matter that reflects or emits light. We know that there is a lot of this "dark matter" in galactic halos and in streamers between galaxies and galaxy groups. Even if *some* of the unaccounted mass is in the form of planets which are too dim for us to see with current technologies, there is no reason to believe that there would be *more* of these planets outside of galaxies, far from any stars, than inside the galaxies, close to stars. 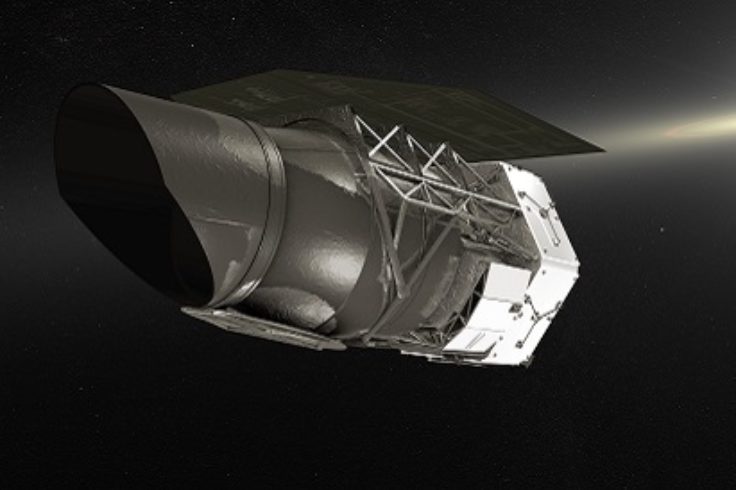