Was our Sun a Feisty Toddler?

Detailed observations of a young, nearby star are giving astronomers a chance to glimpse the Sun’s active youth.

Young stars, like toddlers, are still busy growing. And like toddlers, they can emit a tremendous amount of energy, especially when compared to their quiet, middle-aged parents. 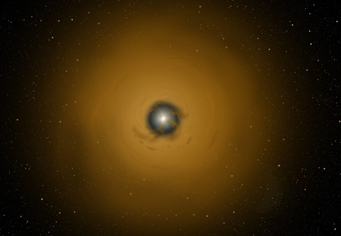 In this artist's illustration we zoom in on our pole-on view of TW Hydrae, where magnetic field lines funnel streamers of gas from the surrounding protoplanetary disk onto the still-forming star.

The Sun is the middle-aged one in this analogy at 4.6 billion years old, and its magnetic field and streaming solar wind are relatively quiet and well behaved. But in its youth, the Sun was probably just as active as TW Hydrae, a 10-million-year-old star 190 light-years away whose magnetic field is 100,000 times stronger than the Sun’s is now.

The magnetic field lines channel gas from the surrounding protoplanetary disk onto the still-forming star, but TW can’t hold on to all the gas it’s receiving, blasting some of it out in a stellar wind. That wind and the star’s radiation will eventually expel all the gas from the disk, leaving only newly formed planets behind.

Nancy Brickhouse (Harvard-Smithsonian Center for Astrophysics) and her team want to watch the accretion and feedback process in detail, so they have trained the eagle-eyed Chandra X-ray Observatory, as well as optical telescopes across four different continents, on this star to get a good look at what the Sun might once have been. Read more about their study in the press release linked below.

HARVARD-SMITHSONIAN CENTER FOR ASTROPHYSICS RELEASE: Young Star Suggests Our Sun Was a Feisty Toddler
In lieu of a working time machine, we learn about the birth of our Sun and its planets by studying young stars in our galaxy. New work suggests that our Sun was both active and "feisty" in its infancy, growing in fits and starts while burping out bursts of X-rays. . . . Read the full press release.

Thanks for pointing out the error; I've added the comma to the offending parenthetical phrase.

Steven, did you really think that the Harvard-Smithsonian Center for Astrophysics has secretly developed the ability to place optical telescopes on the surfaces of stars outside our solar system? A bit of common sense always helps. I've sometimes commented on S&T articles pointing out editing mistakes, but I try to be considerate rather than snarky. (By the way, you left the "t" out of "particular", and you forgot to end your one-sentence comment with a period.)

No. The 'sun' is a star. Why not just write the facts and please - use scientific terminology!