Astronomers using a novel technique have mapped a brown dwarf's visible surface — even though they can't resolve the object in telescopes.

Just a few weeks ago, we reported one team's weather report for Luhman 16B, one of a newly discovered pair of brown dwarfs just 6.6 light-years from Earth. The team's observations showed a gargantuan version of the Giant Red Spot covering between 15% and 25% of the brown dwarf's visible surface.

Now two more teams are reporting additional observations, with one actually mapping out the weather patterns on the brown dwarf's visible surface. 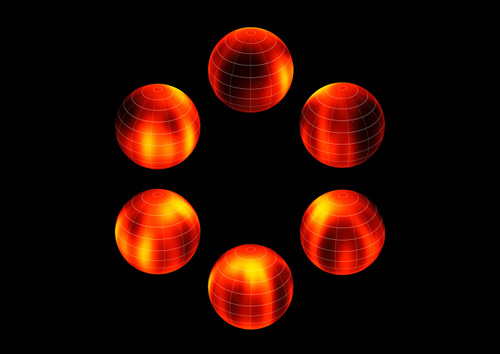 Astronomers have mapped the dark and light features of the brown dwarf WISE J104915.57-531906.1B (aka Luhman 16B) using ESO's Very Large Telescope. The figure shows the object at six equally spaced times as it rotates once on its axis.

Ian Crossfield (Max Planck Institute for Astronomy, Germany) and colleagues mapped the brown dwarf's visible surface in a way similar to the way satellites map our own planet's weather. But unlike Earth, the brown dwarf lies too far away for astronomers to make out individual weather features. So they resorted to a sneaky workaround.

With a spectrograph on the Very Large Telescope the team monitored the brown dwarf's brightness throughout its 4.9-hour rotation while also measuring the light's Doppler shift. Taken together, the measurements told the astronomers whether any bright spot was moving toward or away from Earth, allowing them to create a detailed surface map. (For a good explanation of the method they used, see Max Planck's press release.)

An important note: it's likely that the bright spots in these surface maps are patchy clouds. But it's also possible that the spots could be due to changes in temperature or composition. Follow-up observations using the same technique but in different wavelength bands will be able to tell the difference.

The video below shows a rotating 3D version of the weather map by combining the VLT images: