The winner of the Astronomical League's Webmaster Award was announced at the end of June. Now that I have a blog about all things Internet, I thought it would be best to announce them here! 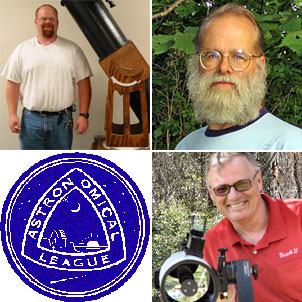 The award is given to "acknowledge the club Webmaster who does an outstanding job of website design and administration."

Second place went to Ken Slater of the Springfield Telescope Makers in Vermont.

Third place went to Chris Reich of the Etna Astros in California.

Once again I was happy to be a judge. Other judges were Drew Carhart, the 2006 Webmaster Award winner from the Naperville Astronomical Association, and Matt Ganis, who works at IBM.

Our evaluations were tallied by Bob Schneider, of the Boise Astronomical Society, administrator of the Astronomical League Webmaster Award.

The League will present Swaim with his award during the ALCon 2007 annual meeting in Portland, Oregon, August 3–4.