The sudden slowing of pulses coming from a spinning neutron star defy explanation — and might require a rethink of the universe’s most exotic denizens. 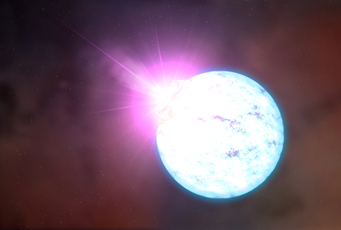 An artist's illustration of a magnetar, a neutron star with a magnetic field tens of millions of times stronger than the most powerful man-made magnet.

Pulsars are one of the most precise timepieces in the universe, rivaling the best of humankind’s inventions. As wristwatches go, they would certainly attract attention: the 12-mile-wide spinning neutron stars have masses up to twice the Sun’s. Beams of radiation shoot out along their magnetic poles, sweeping past Earth like cosmic lighthouses. The pulses are so regular that astronomers first joked they might be a sign of life — now pulsars set some of the world’s most accurate clocks, such as that in St. Catherine’s Church in Gdansk, Poland.

But every now and then, a pulsar suffers a glitch, a sudden uptick in the lighthouse’s spin. These glitches act like windows into neutron stars’ exotic structure, something astronomers thought they more-or-less understood. But Robert Archibald and Victoria Kaspi (McGill University, Canada) led a team reporting a new observation today in the journal Nature that requires a complete rethink of how these objects work.

Peeking Inside a Neutron Star 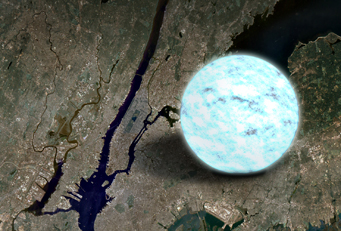 The crushed stellar remnants known as neutron stars squeeze one to two Sun's worth of mass into a sphere no larger than Manhattan.

Neutron stars lie entirely outside the realm of human experience. These stellar corpses squeeze a Sun’s worth of mass into a ball the size of Manhattan. A thin, solid crust about half a mile thick covers a core of nuclear fluid, where neutrons outnumber protons 20 to 1. Theory says the outer crust is made of iron atoms arranged in a crystal lattice. At the crust’s base, densities climb to such levels that the iron lattice melts into a superfluid, a fluid with frictionless flow. Physicists on Earth have to cool liquid helium to temperatures just above absolute zero to create the superfluid state, but neutron stars’ superfluids exist among temperatures soaring to 100 million degrees Celsius.

But when occasional starquakes rock the crust, the vortices are unpinned, releasing angular momentum into the outer crust. The outer crust spins up, and the pulses received at Earth suddenly increase. That spin-up is what astronomers have called a “glitch.”

At least, that’s how it’s supposed to work. But the new study reports just the opposite: a sudden slowdown.

The team was using the Swift space telescope to monitor 1E 2259+586, a neutron star 10,000 light-years away in Cassiopeia hosting an intense magnetic field 5.9 billion Tesla strong. (A manmade magnet of just 100 Tesla screams like a banshee, which makes me grateful that space has no sound.) 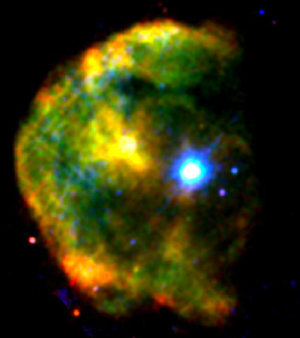 The magnetar 1E 2259+586 shines a brilliant blue-white in this false-color X-ray image of the CTB 109 supernova remnant, which lies about 10,000 light-years away toward the constellation Cassiopeia. X-rays at low, medium and high energies are respectively shown in red, green, and blue.

During nearly a year of observing the magnetar every 2 to 3 weeks, the team watched the magnetar spin once roughly every seven seconds, with a gradual, expected slowdown. Then on April 28, 2012, the pulse rate suddenly dipped by 2.2 millionths of a second, heralded by a blast of X-rays. The dip lasted for a few weeks, until the pulse rate suddenly ticked up again. After all the weirdness, the magnetar is still spinning roughly every 7 seconds, but its spindown rate is now faster than it used to be.

Theory can’t explain what the astronomers saw — glitches should always spin up a neutron star, never down, and it’s not clear why the long-term spindown rate would have changed.

“This ‘anti-glitch’ is a very interesting result . . . An anti-glitch has not been observed before,” notes Bennett Link (Montana State University), one of glitch theory’s major proponents. “My thinking on this is that this anti-glitch is caused by different physics.”

Since glitches are one of astronomers’ only ways of peeling back the surface of a neutron star, the discovery of this new kind of glitch could reveal secrets of neutron star structure.

Regarding the recent interest in glitch phenomena, i.e., a sudden and short-lived spin-up of ultracompact objects, the following can be noted.

Both subatomic nuclei and neutron stars have been observed to undergo glitches.

It is exceedingly unified and makes many definitive predictions, some of which have been verified: http://www.academia.edu/2917630/Predictions_of_Discrete_Scale_Relativity .

The author Monica Young wrote in the article "Weird glitch in a cosmic clock" that a 100 Tesla magnet "screams like a banshee". How does a magnet scream?I've worked with magnets up to a few Tesla, and seen superconducting magnet with up to about 10 Tesla. Not a peep!
Jerry

Couldn't something have collided with it in a direction opposite its direction of spin ? That would minutely slow the pulsar down, and probably give off xrays.