In a thrilling tale of triumph over adversity, the Japanese probe Hayabusa slammed into Earth's atmosphere last night over Australia. The craft had suffered several crippling malfunctions during its seven-year trip to and from asteroid Itokawa, the kind of misfortune that typically spells doom. Yet the brilliantly colored fireball that lit up last night's sky signaled a successful end to the mission.

There were actually two reentries. A few hours earlier a small capsule had separated from the main spacecraft; researchers hope that bits of Itokawa are sealed inside. The two were a few miles apart by the time they plunged through the atmosphere, with the capsule in the lead. Minutes later the capsule landed on target in the Woomera Protected Area, a desolate, 50,000-square-mile military test area about 500 miles northwest of Adelaide. 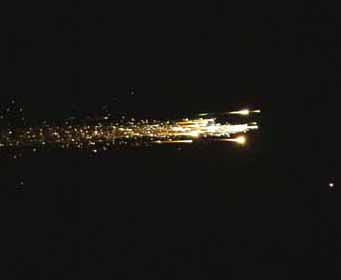 The Hayabusa spacecraft breaks up in Earth's upper atmosphere while its payload capsule (visible at far right) streaks on ahead. This is one frame from a video; click above to see the whole thing.

The main craft, which wasn't designed to survive, put on quite a show. It started breaking apart at an altitude of about 60 miles (90 km), each fragment seared to incandescence by atmospheric friction. Observers on the ground saw a range of vivid colors in the brilliant breakup, estimated to be magnitude –6. In less than 30 seconds, it was all over.

Best of all, I was there to see it! I'd traveled halfway around the world to work side-by-side with a NASA-led expedition of space researchers tracking the space spectacle. It's rare that a reentry happens at such high velocity (7½ miles per second versus the customary 5), so scientifically it was a big deal.

My six-person team was rare too. It included high-school students James Breitmeyer and Yiannis Karavas, both 17, and Brigitte Berman, 16. They attend the Dexter and Southfield Schools in Brookline, Massachusetts, where I teach part time. Over the past few months, Ronald Dantowitz and Marek Kozubal from the schools' Clay Center Observatory helped these kids build tracking platforms crammed with high-end imaging cameras; ultraviolet, infrared, and visible light spectrographs; and an IMAX-quality high-definition video system for recording the reentry.

Most of this high-tech gear was aboard NASA's DC-8 research aircraft in Palmdale, California, alongside other instruments brought by researchers from Germany, the Netherlands, Japan, and several U.S. institutions. This airborne campaign had been orchestrated by Peter Jenniskens, a meteor specialist at the SETI Institute in California.

The plane then headed to Australia, and during Hayabusa's hypervelocity homecoming it followed a racetrack-shaped loop at an altitude of 41,000 feet near the landing zone. Breitmeyer, Berman, Dantowitz, and Kozubal carefully recorded the brightnesses and spectra of the sample capsule and pieces of the disintegrating main spacecraft as they plunged Earthward. In fact, the image shown above is from one of their cameras. 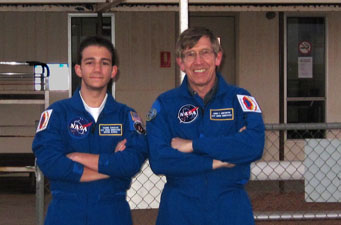 Meanwhile, Karavas and I were recording the brief but dramatic passage at ground level, from the mining town of Coober Pedy. Our images and spectra will be useful in calculating the exact trajectory of the incoming spacecraft. We gathered 12 gigabytes of data in under 3 minutes.

I'd seen the southern sky before — but never like this. The weather worries we'd had in the days beforehand evaporated when a cold front pushed through and delivered an impossibly transparent sky. The Milky Way stretched from horizon to horizon, with the starclouds of Sagittarius and Scorpius overhead, the Southern Cross and Coal Sack instantly recognizable, and the Magellanic Clouds hugging the horizon.

Now that the adrenaline rush from Hayabusa has come and gone, I'm hoping these vistas will still be in view later this evening, when I can set up my 80-mm f/5 refractor and do some much-anticipated stargazing.

Well it landed in the right place but have they been able to narrow its location down from 50 000 square miles down to a more manageable area, perhaps 100 square metres, so as to guarantee location before possible contamination from earthly soils can take place?

50 000 square miles is a lot of territory to sift through. How closely have they narrowed down the location of the capsule at present? 100's of square meters? 10's?
When do they expect to find it by? After all, contamination from terrestrial sources is a risk that increases as time passes.

It was my pleasure to assist the Clay Center Observatory with the prepartaion for this mission, but was not able to go. What they accomplished was absolutely amazing! For those interested in the capsule itslef, please read this article from the BBC. http://news.bbc.co.uk/2/hi/science_and_environment/10307048.stm

The bottom-most image at this site (http://www.isas.jaxa.jp/e/topics/2010/0614.shtml) appears to show an image of the located capsule on the ground, so I'd say that it has been located fairly quickly.