Imagine, for a moment, that you're trying to reconstruct the pivotal Battle of Gettysburg during the U.S. Civil War. You want to know not only the two armies' initial positions and manpower, but also the height and weight of each soldier and how much ammunition he carried into battle. Yet all you have to work with is an aerial snapshot of where all the survivors were standing at the moment the fighting stopped and an assortment of musket balls collected from those bloody Pennsylvania fields.

It's a stretch, I know. But now you've got an idea of what planetary dynamicists are up against as they try to reconstruct how the solar system came together 4½ billion years ago.

In most models, it's a three-step process: (1) dust settles into a flattened disk and collects into countless planetesimals a mile or so (1 to 10 km) across; (2) the planetesimals collide and form Moon- to Mars-size planetary embryos; and (3) the embryos smash into one another until basically all that remains are a handful of rocky inner planets and a second handful of rocky "super-Earth" cores that eventually become the giant outer planets. In other words, the solar system's building blocks grew smoothly and systematically from small bodies to large ones.

The surface of Ceres, as revealed in 2004 by the Hubble Space Telescope's Advanced Camera for Surveys, includes several brighter and darker regions that could be caused by impacts. Ceres itself is slightly wider at its equator (605 miles or 975 km) than at its poles.

But recent studies have (forgive me) punched huge holes in this traditional thinking. For one thing, there's no obvious way for Mother Nature to have assembled objects larger than about 1 meter across within the disk — the forces at play would have caused such bodies to smash themselves to bits or to spiral rapidly into the Sun. Fortunately, work in 2007 and 2008 by theorists Anders Johansen and Jeffrey Cuzzi (and their respective teams) suggests that really big planetesimals could have formed directly from pebble-size particles, bypassing the need for intermediate sizes and neatly sidestepping the "meter-size barrier."

Now a quartet of well-known dynamicists led by Alessandro Morbidelli (Côte d'Azur Observatory, France) has concluded that the Johansen and Cuzzi teams probably got it right. In particular, they find, the asteroid belt wouldn't have the assortment of big and small objects we see today (known as its size-frequency distribution, or SFD) if it initially teemed with smallish planetesimals. Instead, they argue, most of the original inhabitants would have been closer to the size of Ceres, the modern-day belt's undisputed king. "Asteroids Were Born Big" is the title of their analysis, which will appear in a forthcoming issue of Icarus. 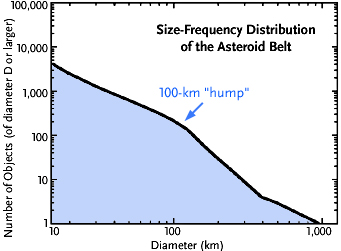 This tally of all known main-belt asteroids at least 10 miles (15 km) across shows that there's a telltale "hump" in the distribution at diameters near 100 km.

A. Morbidelli & others / Icarus

Morbidelli & Co. tackled the question by developing new software to model the outcomes of colliding planetesimals (do they stick together, or shatter and scatter?) and then running computer models ad nauseum using different starting conditions. One important outcome is that planetesimals had to be at least 100 km across to end up with the the modern-day belt's SFD, which has a distinct "bump" at diameters near 100 km.

"Our model is fun, but we have much yet to do," notes coauthor Bill Bottke (Southwest Research Institute). "I suspect we are missing something big with the inner solar system's formation." Still, he thinks the asteroids-born-big concept will likely prove correct — and consequently our notions of how Earth and its siblings came together will change a lot.

Lets add to your thinking the idea of temperature and solar wind--up close everything is a vapor and the wind blows it away--out further and water, ammonia, carbon dioxide--etc are solids and accrue along with everything else--when you get farther out there isn't that much heavy stuff compared to the (frozen) gasses--SO Pluto (poor unappreciated Pluto) is the sort of planet you get at that distance and temperature--it is no more different from Jupiter than Mercury--which is what you get at that temperature and distance. As for the super Jupiter's up close--maybe if the parent star was cool they accrued, gained mass and kept moving closer, and by the time the star heated up and got a solar wind they were a done deal, having swept up everything in the inner solar system and grown quite large. Somebody should model just how much light stuff the solar wind might have blown out of our own system--enough for a couple super Jupiter's wouldn't surprise me. I also wonder if the Moon formed when a Mars sized body hit the Earth--isn't it odd that every single piece of debris went somewhere--solar wind blew away the little stuff?

I always wondered how astronomers could explain the presence of solid iron and nickel asteroids and meteoroids, without the heat and gravity of a large planet, the way we find iron and nickel in the center of the Earth. JM

Jacques Millet: would your wonder mean you haven't yet appreciated that iron and nickel atoms and grains composed of such (and other metallic elements) were, in fact, present in the protoplanetary disk? Look at Jupiter. It also has a core composed of iron and nickel. Even the Sun contains those contaminants. Just because 90% or more of the cloud that gave rise to the protosolar nebula consisted of hydrogen and helium in no way suggests that processes associated with condensation and accretion cannot make bodies that are very different from the general composition of the slurpy that helped give rise to them.

Thanks for your comments, A.A. The accepted theory today is that the Asteroids are particles that never accreted to make a planet. Yes, there were atoms and grains of iron and nickel and all the other elements we find in the solar system now in the protoplanetary disk, but if there was never a planet big enough to melt and separate these atoms from the others, how atoms and dust of iron could aglomarate and fuse into the solid iron meteorites we find, without gravity and fusion? Have an idea?
My idea is that there was a planet with an iron core, silicates closer to the surface and it collided with another planet releasing in the asteroid belt all these iron, and all these silicate asteroids, and all these meteorites we think comes from Mars. J.M.

Stan Kerns is correct about solar wind blowing "away" little stuff. The author repeats a common error, that dust spirals rapidly "into" the sun. Sorry. True only in a stationary radiation field, i.e. in the textbook problem. Real stars rotate, and so do their radiation fields. That is why comet tails point away. Solar wind pushes dust out, not in.