Space physicists have confirmed that electrons in the heart of the radiation belts surrounding Earth are accelerated to relativistic energies locally, rather than coming in from afar.

This year we celebrate the 55th anniversary of Explorer 1. Launched during the International Geophysical Year (and during the height of the Cold War), it discovered two bubbles of high-energy particles that came to be called the Van Allen Belts, in honor of the scientist whose team's simple radiation instrument aboard America's first artificial satellite detected them. These charged particles are trapped, forced to spiral up and down along magnetic field lines at tremendous speeds.

Ever since, space physicists have struggled to understand how the belts' electrons get accelerated to relativistic energies. Electromagnetic "storms" from the Sun were surely involved, buffeting Earth's magnetosphere as they raced past in the solar wind, but how? 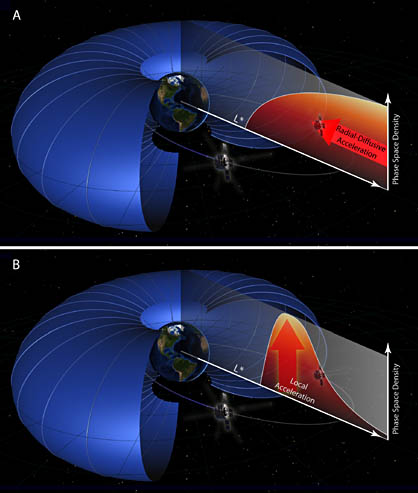 Recent observations by NASA”™s twin Van Allen Probes show that particles in the radiation belts surrounding Earth are not accelerated as they move inward from the outer magnetosphere (A). Instead, they are accelerated by a local kick of energy (B), helping to explain how these particles reach speeds of 99% of the speed of light.

Two competing theories emerged in the 1990s. One, which is called radial-diffusive acceleration, holds that solar storms somehow force electrons from the outer magnetosphere inward, where stronger magnetic fields closer to Earth pump up their energy. By contrast, local acceleration envisions electrons being accelerated in place, drawing their energy from electromagnetic waves in the solar wind.

Scenario #2 is the apparent winner, based on early results from NASA's Van Allen Probes. Launched last August, these twin spacecraft follow each other around Earth in looping 9-hour-long orbits that repeatedly plunge them through the radiation belts.

The twin probes had been on the job for less than two months when, on October 9th, electrons in the belts experienced a sudden surge in energy. But simultaneous measurements from the Van Allen Probes show it wasn't an electromagnetic tsunami that started far out and then crashed inward. Instead, the intensity built up right in the heart of the magnetosphere — something was accelerating the electrons locally — and only later did those farther out become energized. 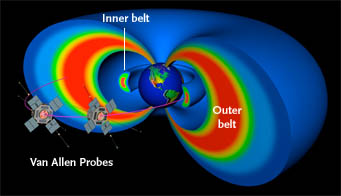 As investigator Geoff Reeves (Los Alamos National Laboratories) and others detail in the July 25th edition of Science, the most logical explanation is an abundance of very low-frequency (VLF) radio waves in the solar wind. These amp up the electrons through a resonance akin to repeatedly pushing someone on a swing to reach thrilling heights.

Reeves cautions that radial diffusion might sometimes play a role in accelerating magnetospheric electrons, but it wasn't involved during the October event.

"In this particular case, all of the acceleration took place in about 12 hours," he notes in a NASA press release. "With previous measurements, a satellite might have only been able to fly through such an event once and not get a chance to witness the changes actually happening."

Sorting out this particle-acceleration process was a key objective for the twin spacecraft, formerly called the Radiation Belt Storm Probes. They've also identified a third concentration of charged particles wedged between the two main belts.

"These amp up the electrons through a resonance akin to repeatedly pushing someone on a swing to reach thrilling heights." Not to get technical, but it sounds more like a cyclotron accelerator: magnetic field (Earth’s) to keep the ions going in a circle; radio waves (in the solar wind) to accelerate them.

Just a random thought about particle acceleration, & magnetic fields.
If the Sun has been accelerating particles using VLF or maybe even ELF waves, they (the particles) would be generating their own magnetic fields.
Is it possible that in a sort of induction process, those fields could be boosting the intensity of Earth's own magnetic field, driving energy into the Earth's core, accelerating the motion of the liquid Outer Core, in a sort of positive feedback loop?
So that rather than radioactive decay & residual heat from accretion, alone, this is a process which could gradually pump up the temperature of the Earth's center. After all, it has had 4.5 billion years, to work at it. That could be why Plate Tectonics are powered on Earth, and not on the other terrestrial planets. (And maybe why Jupiter generates so much heat from inside)
Any physics people out there to do the math? Is it just crazy enough to be true? Do we need new space probes to get more data? I'll gladly share the Nobel prize with you, if the figures work out.

Interesting conjecture Mr. Cernik. I too have had some ‘random thoughts’ about what may be helping to keep the earth’s outer core molten, which is a very important factor in the maintenance of long term habitability (or, at least, comfortable habitability) on this planet. If the earth’s interior were to solidify the Van Allen belts would disappear, allowing solar wind and radiation to erode the earth’s atmosphere. And with no mountain building tectonics and volcanism wind and water would eventually erode all the land down to sea-level too. Therefore for the long haul much depends on keeping things flowing down below. Frank, you might just be on to something. Note that, just as the sun’s main sequence lifetime is thought to be about 10 billion years, this duration also happens to be the half life of the main isotope of uranium, the decay of which is thought to be the principle source of the earth’s continuing internal heating. But over time there is less and less radioactivity to keep things nice and molten down there. Before the famous missing solar neutrino problem was solved I had ‘randomly thought’ that a small fraction of solar neutrinos might serve as a kind of core to core (Sun’s to Earth’s) energy transfer mechanism. But that idea of mine no longer seems viable, even to me. Therefore I welcome your suggestion very warmly. Nice idea. Let’s see if it catches on Frank. But to earn a Nobel I think they would require you to do the math.

WISE Takes a Look (All) Around