Astronomers have announced a new class of gamma-ray bursts, possibly created when some of the biggest stars in the universe go supernova. 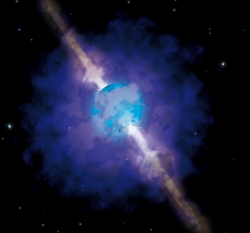 An artist illustrates a blue supergiant star going supernova, emitting a gamma-ray burst in the process.

On Christmas Day, 2010, a flash of gamma rays set off an alarm aboard NASA’s Swift satellite. The alarm is triggered whenever intense, high-energy flares arrive from violent, faraway explosions. In a matter of seconds, these brief gamma-ray bursts (GRBs) unleash more energy than the Sun can radiate over its entire 10-billion-year lifetime. But the Christmas Day burst, technically known as GRB 101225A, didn’t last mere seconds — it lasted 30 minutes.

Barely a year later, Santa came early with another history-making GRB. On December 9, 2011, GRB 111209A erupted, lasting at least seven hours and becoming the most energetic cosmic explosion ever observed. The two bursts lie 7 billion and 6 billion light-years away, respectively.

The mysterious events had left astronomers scratching their heads, but answers may now be in hand. Andrew Levan (University of Warwick, UK) and his team announced at the Huntsville Gamma-Ray Burst Symposium yesterday that these two bursts, along with an equally odd third one 10 billion light-years away, might be part of a new class of GRBs dubbed “ultra-long.” (Only in the gamma-ray world could an event that lasts only a few hours qualify as “ultra-long”!)

GRBs defied explanation long after their discovery in the late 1960s. It wasn’t until the 1990s that astronomers began to make some headway with the newly launched BeppoSAX satellite, tracking the GRBs down to more precise locations and matching some of the mysterious flashes with X-ray, ultraviolet, and visible-light afterglows. The launch of Swift in 2004 accelerated progress — as of March 2013, Swift has detected more than 750 GRBs. 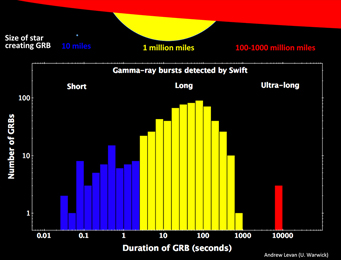 Three ultra-long bursts make up a new class of GRBs, compared here to their short and long counterparts. The plot shows the number, duration and burst class for Swift-observed GRBs. Colors link each GRB class to illustrations above the plot, which shows the estimated sizes of the source stars. For comparison, the yellow star is about 20% larger than our sun.

A. Levan (University of Warwick)

All of these data now point to two main causes of GRBs. “Short GRBs” last less than two seconds and are likely created when two neutron stars merge. Supernovae are the more likely culprit behind “long GRBs,” defined as bursts lasting longer than two seconds.

Not every supernova will create a long GRB: it takes the collapse of a massive, rapidly spinning star that has already ejected its outer layers of hydrogen and helium. After the core collapses into a black hole, the outer layers fall inward to feed the beast. The swirling accretion disk lasts mere minutes, powering a jet that punches its way through the outer stellar layers and unleashes vast amounts of gamma rays.

But ultra-long GRBs can go on for hours, presenting a new challenge for theorists.

“During all the history of GRB research, every time a scenario appeared as assessed, a new burst would appear, compromising this happy view,” notes Enrico Costa (Institute for Space Astrophysics and Planetology-National Institute for Astrophysics, Italy). 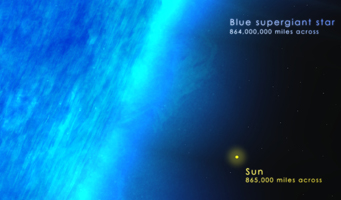 Levan’s team was up for the challenge: they propose that supernovae might still be to blame, but this time coming from the most extreme stars in the universe — blue supergiants that can grow to more than 1,000 times the size of the Sun. Because these stars are so much bigger than the usual GRB culprits, the outer layers take longer to fall in and the jet lasts much longer.

There’s an alternative explanation, one that Levan’s team has also proposed: the explosion comes from the tidal shredding of a star passing too near a supermassive black hole. The physics would be largely the same: as in the supernova explanation, the gamma rays would come from a jet pointed toward us that’s powered by the accretion of the stellar remains, and the visible-light afterglow might come from the accretion disk itself. This alternate theory can’t be completely ruled out because the events don’t contain unambiguous supernova signatures.

“In my opinion, both [hypotheses] are consistent with data,” says Costa, who was not involved in the study. But Levan argues that the star-shredding theory would require too many special circumstances to fit the observations, so giant-star explosions are the better bet.

“That said, the universe is good at surprising us,” Levan says.

Present techniques make ultra-long GRBs hard to find. Though they release the same tremendous amounts of energy as their short-lived brethren, they take a longer time to emit that energy. Many ultra-long events might not even trigger Swift’s GRB alarm. They also might look as if they’re coming from nearby, say from an X-ray binary in our own galaxy rather than from a supernova in a galaxy billions of light-years away.

Milky Way sources have been discarded from GRB searches as a matter of course, but now the team plans to follow up on events that appear local in hopes of finding more distant, ultra-long events. “We expect to find more now that we know what we’re looking for,” Levan says.

A NASA video chronicles the evolution of the theories describing the Christmas Day burst: