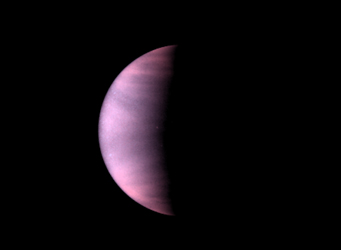 A crescent Venus as seen in ultraviolet light by the Hubble Space Telescope.

Back when Earth was very young, our home world was steadily pummeled by large solar system debris. While Earth withstood the barrage of hits like a prizefighter that wouldn't fall down, one blow nearly destroyed the world. A Mars-size body plowed into us, completely disrupting both bodies and splashing massive amounts of debris into orbit which, most astronomers agree, coalesced to form our Moon.

But if something that large hit us, how did our nearest-neighbor planet, Venus, dodge the same fate? According to a new study, it didn't. Billions of years ago, according to work announced yesterday, Venus once had a moon that formed the same way Earth's did.

On Monday at the American Astronomical Society's Division of Planetary Sciences meeting in Pasadena, California, Caltech undergraduate Alex Alemi presented models created with David Stevenson of Caltech that suggest Venus was not only slammed with a rock large enough to form the Moon, the event happened at least twice.

According to Alemi and Stevenson, in models of the early solar system it is nearly impossible for Venus to avoid a big hit. Most likely, Venus was slammed early on and gained a moon from the resulting debris. The satellite slowly spiraled away from the planet, due to tidal interactions, much the way our Moon is still slowly creeping away from Earth.

However, after only about 10 million years Venus suffered another tremendous blow, according to the models. The second impact was opposite from the first in that it "reversed the planet's spin," says Alemi. Venus's new direction of rotation caused the body of the planet to absorb the moon's orbital energy via tides, rather than adding to the moon's orbital energy as before. So the moon spiraled inward until it collided and merged with Venus in a dramatic, fatal encounter.

"Not only have we gotten rid of the moon, but we've also done well to explain Venus's current slow rotation rate [and direction]," says Alemi. If a second moon formed from the second collision, it too would have been absorbed the way the first one was.

The models do allow for more than two impacts, but the probability of Venus enduring several massive collisions is low. "You can do this with multiple collisions, but the hypothesis is that [the net result] adds up to a negligible contribution" to the planet's final state, says Alemi.