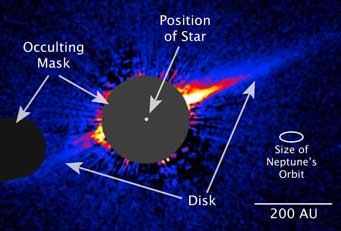 An annotated image taken by the Hubble Space Telescope's Advanced Camera for Surveys on July 17, 2006, reveals the lopsidedness of a debris disk surrounding star HD 15115.

In the September 2007 issue of Sky & Telescope, Mark Littmann's article "From Chaos to the Kuiper Belt" (page 28) explains how astronomers believe that the outer planets of our solar system were pushed around by countless encounters with planetesimals. During this planetary migration, there was a period when the orbits of Saturn, Uranus, and Neptune became markedly noncircular. Astronomers may have found a star system that is undergoing the same thing.

Many stars are known to have disks of debris around them. Last week, researchers using the Hubble Space Telescope and Keck Telescope presented an image of the star HD 15115, an F-type star 150 light-years away in Cetus, that has disk, but it's lopsided. One possible explanation for the unsymmetrical disk is that the star's planets have elongated orbits, and have spread out the material unevenly. Alternately, it could be the result of a brush with a nearby star.

For more details, see the press releases from the Space Telescope Science Institute and Keck Observatory. The full study appears in The Astrophysical Journal Letters.