Why the future could be a BLAST

Imagine a steep mountainside burdened with snow, its powdery mass poised over a quiet Alpine valley. You don’t have to be a backwoods skier to recognize the inherent danger in this situation. Under the right conditions, the stable and stationary snowpack can suddenly fracture and dissolve into a rushing avalanche that sweeps away everything in its path. Yet, until that happens, the scene is one of utter calm and serenity.

Now imagine it’s a warm summer night and you’re somewhere far from city lights, enjoying a spectacular view of the stars. The Milky Way glows like a ribbon of light weaving its way through the constellations. It’s also a moment of calm and serenity—or so seems. But now a new look at our home galaxy suggests the Milky Way may have more in common with avalanches than anyone realized. 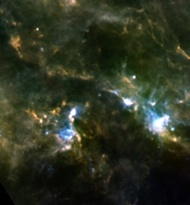 My God! It's full of cores.

This insight comes from the BLAST mission, short for “Balloon-borne Large-Aperture Sub-millimeter Telescope.” As the names suggests this impressive detector, nearly as large in aperture as the Hubble Space Telescope, was made to do its work while suspended from a helium filled balloon, some 35-kilometres above sea-level. There’s not much air left at that altitude, and certainly not much water vapor. Such conditions are ideal for looking at the universe in the “submillimeter” part of the spectrum—a kind of astronomical grey zone that falls between infrared and radio waves. This window turns out to be crucial to astronomers interested in the formation of stars, whether in the Milky Way or in distant galaxies half a universe away.

Back in December 2006, BLAST rode the steady winds of the Antarctic summer and observed the submillimetre universe for 11 continuous days. Earlier this month astronomers published their findings from the BLAST flight, garnering cover-page status in the journal Nature. One of the more curious results from the mission is that everywhere BLAST looked at gas within the Milky Way, it found “cold cores”—dense concentrations of gas that should have collapsed and turned into stars by now, but so far have managed to avoid doing so.

What’s stopping them is anybody’s guess. One theory is that magnetic fields are propping up the cold cores, so that gravity can’t take over and initiate the star-forming process. Whatever the explanation, you have to wonder what our galaxy would look like if all those dormant cores were to suddenly collapse and make news stars. It may well resemble a “starburst” galaxy, a galaxy virtually exploding with star formation. We see starburst galaxies in different places. One of the nearest is M82, a smaller galaxy near the large, graceful spiral M81. It’s long been supposed that gravitational interaction with M81 is what triggered M82 to become a starburst, but it’s never been too clear exactly how that happens. All those cold cores may provide an answer. It cloud be that many normal galaxies could be converted into starbursts, if their cold cores are tickled in the right way.

Such a stellar avalanche way well be in our future: As our Milky Way draws ever nearer to the Andromeda galaxy it’s clear that in a few billion years (or less) the two will collide. When that happens all the cold cores seen by BLAST may not stay cold. The impending collision could set off a round of celestial formation not seen in these parts since the Milky Way was born. Presumably new planets and the possibility of new life and new civilizations will also be part of the starburst equation. Humans may not be around to see it, but the future Milky Way-Andromeda merger could be the beginning of a golden age for life. And when you’re considering an impending avalanche, it’s important to look on the bright side.