Will Leonids "Storm" for North America? 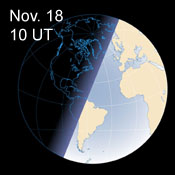 A 'meteor's-eye view' shows how Earth will be oriented for the first expected peak of the Leonid shower on November 18, 2001, at about 5 a.m. EST (2 a.m. PST). That's when dynamicists predict that Earth will encounter the most dense region of particles released by Comet Tempel-Tuttle. While the entire hemisphere will experience the shower, meteors will only be visible in the nighttime region on the left.

A new analysis of past Leonid activity suggests that next
weekend's much-anticipated event may bring skywatchers in North America
their most dramatic meteor "storm" in 35 years. This last-minute prediction
comes from meteor specialist Peter Jenniskens (SETI Institute and NASA/Ames
Research Center), whose analysis will appear in the October issue of
WGN, the journal of the International
Meteor Organization.

Dust shed by Comet Tempel-Tuttle creates a stream of debris
along its orbit, and we see a burst of meteors each November when Earth
crosses the comet's path. But meteor specialists have known for decades
that narrow, concentrated ribbons of dust lie embedded within the stream.
The challenge has been to determine where exactly these dense strands
lie after centuries of being nudged around by planetary perturbations
and other forces. As described by Joe Rao in Sky & Telescope's November issue, two teams of dynamicists predict that a strong Leonid display will be
seen from North America in the predawn hours of November 18th, and that
a more spectacular show awaits Australia and eastern Asia about 8 hours
later.

But Jenniskens argues that it's the other way around,
with North America getting the best show — culminating in half-hour-long
outburst of 2,000 meteors (for observers with dark, clear skies) centered
at 5:09 a.m. Eastern time. His predicted rate for North America is five
times that calculated by David Asher (Armagh Observatory) and Robert
McNaught (ANU/Siding Spring Observatory). Australia and Asia should
still experience a great display, Jenniskens adds, but at levels roughly
half of that for North America.

Jenniskens' analysis differs from the others' because
he relies heavily on careful counts of recent Leonid meteors showers
alongside other historical records. In doing so he finds that the narrowest,
most dense debris streams have been shifted slightly toward the Sun
over time. Thus, he argues, the comet's 1866 dust trail, which will
dominate the Australia/Asia display, lies farther from Earth's orbit
than the other teams calculate. Conversely, the 1767 stream, which North
America will experience, should skirt closer to us than expected. These
shifts may occur because the escaping particles are being shot out into
space by a strong gas-powered jet on Tempel-Tuttle's nucleus, like one
observed in early 1998.

Reaction to Jenniskens' assessment from the competing
modelers has been guarded. "Peter has done good work in getting and
analysing the observations, and his theoretical studies are quite important,"
says Finnish dynamicist Esko Lyytinen. "However, I think that his conclusions
for the shifts are not quite correct." McNaught believes that Jenniskens
is on thin ice by equating the apparent rise and fall of an observed
shower with the distribution of dust within a trail. Ultimately, next
week's display will decide who's right and who's wrong, since each
of the four models predicts distinctly different results.