Will the Webb Telescope Be Canceled?

The road to the launch pad for NASA's James Webb Space Telescope, long billed as the successor to Hubble, has been a rocky one. 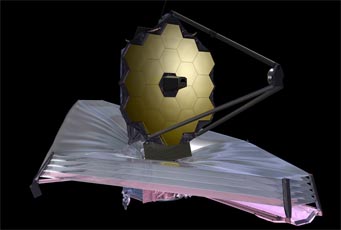 Artist's conception of the James Webb Space Telescope in orbit.

Last year a blue-ribbon review panel found that the effort to build JWST was rife with bad planning, poor cost control, and too much optimism about the technical challenges it faced. The project is so seriously over budget and behind schedule, the report concludes, that only a quick infusion of cash — an extra $500 million over the next two years — would prevent the launch date from slipping to 2018.

But that hasn't happened, and although the project has yet to announce anything officially, last April NASA administrator Charles Bolden testified that the delay to 2018 is looking more and more "reasonable."

Yesterday the House Appropriations Committee unveiled its spending plan for the coming fiscal year. Rather than adding the needed funds to speed JWST along, the cost-conscious Congress is looking to make deep cuts in the space agency's budget. It proposes to provide NASA with $16.8 billion in fiscal 2012 — $1.6 billion less than in fiscal 2011 and $1.9 billion below President Obama’s request. Worse, the House committee specifically calls for the termination of the JWST project. 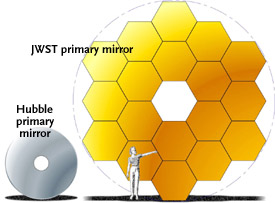 Measuring more than 21 feet (6.5 m) across, the primary mirror for the James Webb Space Telescope will have a diameter some 2½ times that of the Hubble Space Telescope.

It's a shocking and unexpected turn for the next step after Hubble, which is due to cease operations later this decade. "In these austere budget times, a cut to the request was widely expected, but not to this extent," notes Marcia Smith, a veteran space-policy analyst. The Committee is looking to make such deep reductions, in part, because Congress favors having NASA develop a new heavy-lift Space Launch System capable of sending crews beyond Earth orbit. The fiscal 2012 plan contains $1.9 billion to keep that program rolling.

Meanwhile, construction on the telescope continues, and some technical milestones have been reached. On June 30th, the project announced that technicians had finished polishing all of the telescope's beryllium mirrors. More than 75% of the JWST hardware is either in production or done and undergoing testing, NASA claims.

Although astronomers are looking forward to the rich discoveries that the Webb telescope would surely make — and have been designing the next generation of ground-based instruments to complement it — they're also aware that its total price tag, now estimated at $6.2 to $6.8 billion, will continue to suck up federal dollars that NASA could use to fund an entire slate of promising astronomical spacecraft.

There's been no official reaction from NASA or the Obama administration concerning the proposed budget cuts, but this is just one round in a grueling battle over the federal budget in general. Moreover, NASA has a powerful ally in Senator Barbara Mikulski of Maryland, who has steadfastly supported her state's Goddard Space Flight Center, which manages the JWST effort. But clearly the project will be a lightning rod for discussing what's going right and wrong at the space agency in the months ahead.

The American Astronomical Society (AAS), the organization of US professional astronomers, issued a statement this afternoon protesting the House Appropriations Committee's plan to cancel the Webb Telescope, calling it "the centerpiece of U.S. space astronomy for the next two decades."

Again, we see the fallacy of putting some many eggs into one basket. These extremely expensive projects suck up so much money that could be used to build and launch multiple missions. And if they get cancelled (Ares I) then all the money is wasted.

"The Committee is looking to make such deep reductions, in part, because Congress favors having NASA develop a new heavy-lift Space Launch System capable of sending crews beyond Earth orbit."

The article blames the Republican controlled Congress, but this clearly shows that they are following Obama's plan for NASA!

I believe that foxnews.com and cnn.com are the universally accepted clearing houses for unconstructive partisan finger pointing.

I hope there is intelligent debate on this issue. Personally, I don't see JWST's problems being fixed, nor do I see NASA ever admitting the mistakes made on the project (I am open to contradictory evidence on this point) I would like more, objective information on this, but with what I know and understand, I wouldn't cry cancellation of this, given the situation. We can always build something as good, or better later.

Actually, this seems to be a fair and balanced article. S&T and Mr. Beatty are to be commended on their reporting.

I have been following the development of the Webb scope, and while I am aware of some design revisions and other modifications and technology updates associated with a radically new telescope design, I am not aware of any “Deal killing” flaws in the JWST. From what I have seen, the myriad sub systems seem to be passing all the vibration and deep cold tests.

Now the people who hold the purse strings have motives that have absolutely nothing to do with the technology at hand.

If NASA weren't permitted to do expensive projects, there'd never have been a Moon landing, a space shuttle, a Hubble Space Telescope, or a Saturn orbiter. There's a place for small missions, and there's a place for big missions. Some objectives can only be accomplished with the latter.

I am not surprized by the budget cuts. I'm afraid that this is just another example of the short sightedness of our elected leaders. With the end of the Shuttle program and no sucessor launch vehicle the US manned space program is pretty much over. Now Washington will go after unmanned science programs. I am waiting for the Chinese to announce that they are going to Mars and when that happens we will get back into space. It's never been about achieving something with the space program; it's really always been about beating the other guys. If that's what it takes, so be it.

I think we could get a better bang for our buck if we concentrated on UNMANNED programs, and forget sending manned crews to Mars and beyond. Continue with Webb and future space instruments. I am afraid that NASA is too fixed on manned stuff.

When a project is over budget and behind schedule is due to incompetence and poor project management. We cannot blame our short sighted, narrow-minded politicians (Republicans and Democrats) for this. “Bad planning, poor cost control and too much optimism in overcoming technical challenges.” We have seen this before….ask the military. I understand it is not easy, the challenges are enormous, probably a lot of ambiguity and pressure. That is why you need to run a tight ship and react rapidly and forcefully when you steer off course. The management of this project should pay with their jobs. They should be ashamed of putting the whole program in jeopardy.

We will save money in the long run by funding JWST this year, instead of delaying the mission, which will result in a higher total cost. Typical brain-dead, short sighted behavior by the Republican dominated House Appropriations Committee!