Astronomy is ready for the next generation of detectors, and superconductors are at the heart of the coming revolution. 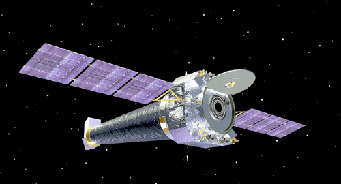 Despite the challenges of X-ray astronomy, telescopes like Chandra have an advantage: when they take a picture, they get a spectrum and a light curve for free.

Back in my former life, I was an X-ray astronomer. While optical astronomy charged ahead with camera technology that benefitted from commercial investment (hello, smartphones), the X-ray detectors I worked with were of a more “homebrew” variety (really good homebrew).

If I point an X-ray telescope at, say, a distant quasar for a few hours, I might get a few hundred photons if I’m lucky. Compare that with an optical image, where the same quasar might emit millions of photons. As a professor of mine once joked, X-rays are so few and far between, they should have names: “Look, there go Peter, Jill, and Harry.”

But, paradoxically, there's a benefit to that. Using detectors aboard telescopes such as ESA’s XMM-Newton or NASA’s Chandra, you really can get to know each individual photon — if not its name, then at least its energy and arrival time. In more scientific jargon, take an X-ray image, and you get both a low-resolution spectrum and a light curve for free.

Typical optical telescopes can’t do that. They use charge-coupled devices (CCDs), like the digital camera in your smartphone, to capture photons. But a CCD image is just an image — to put together a light curve, you would need to take multiple images, and to split the light by wavelength would require a spectrometer. 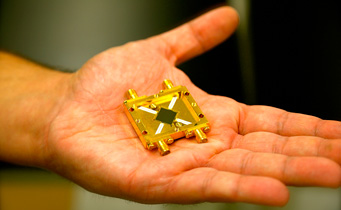 ARCONS is a superconducting photon detector consisting of a 2,024-pixel (44 x 46) array sensitive to UV, optical, and near-infrared light.

Now that may be changing. A new technique is emerging called integral field spectroscopy, in which optical detectors use various methods to grab a spectrum at the same time that they take a picture. Among the newest instruments is the Array Camera for Optical to Near-infrared Spectrophotometry (ARCONS), developed by Ben Mazin (University of California, Santa Barbara) and colleagues.

ARCONS transforms visible-light and near-infrared telescopes into multitaskers, measuring the energy (to a few percent or better) and arrival time (to within a microsecond) of each photon. And though the technology is still in its infancy, a 2,024-pixel array is already taking images on the Palomar 200-inch telescope.

But in ARCONS, a single photon unleashes not a single electron, but a cascade of thousands of them. And when the detector counts electrons, it sees not just how many there are, but also when they arrived and with what energy. This is possible because at the heart of ARCONS is a superconductor, a material that lives in the weird world of quantum physics. Normally, electrons repel each other, but in certain materials cooled to a fraction of a degree above absolute zero, electrons can form incredibly weak bonds called Cooper pairs. The material has to stay cold enough to calm the electrons’ thermal wiggles; any disturbance, such as a single intruding photon, can break the pairs and unleash a cascade of electrons — and it’s this flood of electrons that ARCONS picks up.

ARCONS is revolutionary, too, in that its electrons don’t march out of the detector in single file to be counted. Instead, each pixel tallies its own electrons, then the detector collects all the pixels’ information by sweeping them from the outside with carefully tuned microwaves.

The external sweep allows the superconductor to stay barely above absolute zero while the surrounding electronics remain at room temperature. And a supercold detector is a huge plus because it means that it has virtually no “dark noise,” the false photons CCD cameras see even when the shutter is closed. (If you’ve ever closed your eyes in a dark room, you’ll notice it’s never completely dark — your eyes have dark noise, too.)

Detector of the Future 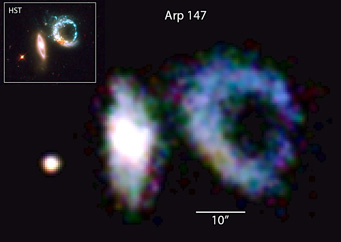 This mosaic of interacting galaxies Arp 147 was created from 36 pointings, each covering a 20" x 20" field of view, taken with ARCONS on the Palomar 200-inch telescope. The inset shows the same field of view from the Hubble Space Telescope. But unlike Hubble's image, the ARCONS image contains within it a spectrum and a light curve.

“It is really a complete switch of technologies,” Mazin says. “The switch really opens up a whole new world of possibilities, just like the switch 30 years ago from film to semiconducting detectors.”

One of those possibilities is the direct detection of exoplanets, a task made extraordinarily difficult by the huge contrast between the faint planet and its much brighter star. Mazin’s team already has the funding to build a new ARCONS-like detector designed to work with Palomar’s Project 1640. The detector’s ability to capture images and spectra simultaneously, plus its low noise level, will help catch the “firefly near the searchlight.”

Here are links to two other studies using ARCONS:

Just when you think detectors have maxed out, something like this is developed. Who would ever think it could be read with microwaves. An amazing achievement by a very talented team. It won't equal the invention of the reflecting telescope, but it might one day prove close.

Very interesting, and potentially revolutionary, but note the TINY size of the detector, 44x46 pixels. It's also not clear what the effective quantum efficiency is (we know the gain is high, but that's NOT the same thing).

“For who has despised the day of small beginnings?” (Zechariah 4:10) Don’t nearly all new inventions begin small? It’s hardly surprising that the first ARCONS unit has a small pixel count. Hopefully this breakthrough will lead to further improvements that will help us glean much more from what telescopes can collect. Imagine being able to quickly discern reflected planetary photons from starlight, for example.

Thanks for posting this. I have wished for some time that S&T would do more coverage of the technology behind modern astronomical observations. This article is a fine example of the sort of thing I'd like to see more of.

@speakertoanimals
"It's also not clear what the effective quantum efficiency is (we know the gain is high, but that's NOT the same thing)."

Since QE is defined as the percentage of photons hitting the device's photoreactive surface that produce charge carriers and considering that in this device a single photon always causes a cascade of electrons proportional to its energy, it would appear the QE of the device would be 100% for the wavelengths it is sensitive to.

The quantum efficiency, defined by the signal generation trigged by the incoming signal, would exceed 100%. For example, one photon triggers the generation of a thousand electrons, yield a QE of 1000%.

Itegral Field Spectroscopy is a technique to allow spectral information to be extracted simultaneously for each spatial resolution element within a two-dimensional field of view (as opposed to conventional spectroscopy which uses a slit) and has been around for several decades in various guises using e.g. fibres (the GMOS instruments on Gemini), image slicers (KMOS on the VLT), etc. The innovation is therefore not Integral Field Spectroscopy as such, but the way in which it is achieved here: by directly measuring photon energy without gratings or the like.