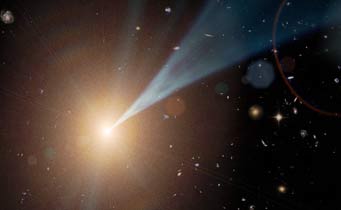 Some galaxies have feeding supermassive black hole that shoot out relativistic jets, shown here in this artistic depiction. Galaxies that point their jets right at us look different at infrared wavelengths than other galaxies. Astronomers have used this distinction to identify more than 200 new blazars, most of which were unidentified gamma-ray sources; the others were known to be active galaxies but of undetermined type.

NASA’s infrared eye on the sky is helping astronomers take on a high-energy challenge. The Wide-field Infrared Survey Explorer (WISE) team recently released the spacecraft’s all-sky survey, an impressive catalog of infrared sources that includes stars, asteroids, and galaxies. But while WISE could only see in infrared — its four detectors centered on 3.4, 4.6, 12, and 22 microns — astronomers have found a way to expand its usefulness to the shortest, most energetic wavelengths around: gamma rays.

But recently Francesco Massaro (SLAC National Laboratory and Kavli Institute for Particle Astrophysics and Cosmology) and his colleagues figured out that galaxies with a jet pointed straight at us — called blazars — have a distinct infrared look compared with other galaxies, both active and quiet. That’s because the infrared emission from blazars is from synchrotron radiation, radiation emitted by charged particles such as electrons as they spiral through a magnetic field at relativistic speeds. In other galaxies, most of the infrared photons come from hot dust. These two types of emission are easily distinguishable.

Massaro and his colleagues used the blazars’ unique signals to do follow-up on 313 unidentified gamma-ray sources detected by the Fermi telescope. Using WISE’s preliminary data release (which covers about half the sky), they found that 156 of them are associated with at least one blazar candidate. Their findings will appear in an upcoming Astrophysical Journal.

Figuring out which sources are blazars will help astronomers determine if any of the mystery sources are heretofore-unknown phenomena, says Alan Marscher (Boston University), who was not involved with the project.

Massaro’s team is also applying their method to unidentified sources in data from the European Space Agency’s Integral spacecraft, which observes in gamma-ray, X-ray, and visible light.

Did Ancient Americans Record a Supernova?