Even though it can no longer survey the cosmos at far-infrared wavelengths, NASA's Wide-field Infrared Survey Explorer is about to be revived to discover and track small near-Earth objects. 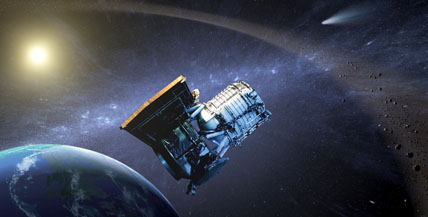 This artist's concept shows the Wide-field Infrared Survey Explorer (WISE) spacecraft in its orbit around Earth.

Yesterday NASA officials announced that a spacecraft they had shut down 2½ years ago, presumably for good, will be revived from its electronic coma and begin a three-year scan of the inner solar system. The objective is to spot and track potentially hazardous objects in Earth's vicinity — with an eye toward investigating small asteroids suitable for future exploration missions.

It's quite a turn of events for the Wide-field Infrared Survey Explorer, which began orbiting Earth on December 14, 2009. WISE spent 10 months imaging the entire celestial sphere at the infrared wavelengths of 3.4, 4.6, 12 and 22 microns. The latter two channels offered the best sensitivity for detecting small, dark (but warm) objects circling the Sun. 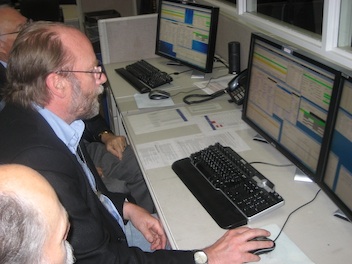 Ned Wright, principal investigator for the WISE mission, sends the command to turn off the spacecraft's transmitter on February 17, 2011.

When its solid-hydrogen coolant ran out, the spacecraft morphed into NEOWISE, hunting down near-Earth objects using the two near-infrared channels that didn't need to be cryogenically chilled. That mission lasted four months before the spacecraft's transmitter was switched off in February 2011.

So why is NASA resurrecting this mission? Earlier this year the space agency unveiled a plan that, technically, fulfills President Obama's 2010 pledge to have astronauts visit an asteroid. A robotic craft is to snare a small asteroid and park it in a wide orbit around the Moon; then astronauts riding aboard the Orion capsule (now under construction) for the first time will rendezvous with the captive rock, sample it, and return to Earth.

But a suitable target asteroid has yet to be found. Even though the census of NEOs now tops 10,000, only a few hundred are small enough (5 to 10 meters across) to be snared and dragged into position. And of those, only a handful have orbits known with much precision.

So if the agency's Asteroid Redirect Mission is to succeed on the announced timetable (target asteroid selected by 2016, captured by 2019, and visited by the Orion crew in 2021-22), the pace of NEO discovery must accelerate — and soon. 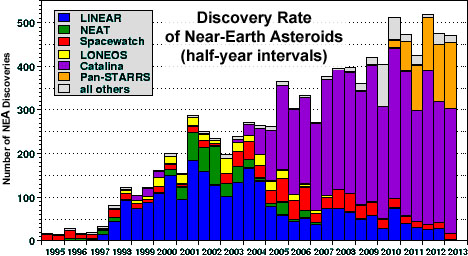 Ground-based astronomers have accelerated the discovery rate of near-Earth asteroids, especially with the advent of the Catalina and Pan-STARRS search telescopes. The higher-than-average numbers for "all others" (gray) in 2009-10 are due primarily to the WISE spacecraft.

The Pan-STARRS and Catalina telescopes are churning out nearly 1,000 NEO discoveries per year. However, small objects are problematic because they're typically spotted only when close to Earth and then quickly disappear into the depths of interplanetary space. As NEO specialist Alain Maury sees it, "Roughly speaking 90% of the asteroids fainter than magnitude 27 [roughly 50 feet across or smaller] have a worthless orbit."

The restarted NEOWISE effort won't offer the cryogenic sensitivity of the initial all-sky search, which netted 34,000 main-belt discoveries and new details about another 124,000. But mission scientists hope the craft's 16-inch (40-cm) telescope will lead to the discovery of roughly 150 NEOs while characterizing the size, reflectivity, and thermal properties of about 2,000 other rocky objects.

It's still unclear what the criteria for NASA's Asteroid Redirect Mission will be. But if the optimum target is a 5- to 10-meter asteroid, NEOWISE probably won't be the one making that discovery, says Lindley Johnson, who manages NASA's NEO search programs. However, he adds that the spacecraft's observations can still play a role — astronomers can look to the image archives to characterize candidate asteroids' size and albedo, among other characteristics.

Understandably, the NEOWISE team is ecstatic about the restart. Principal investigator Amy Mainzer tweeted, "I feel like I'm orbiting about 500 km above the Earth right now! Woo hoo!"

Meanwhile, the Asteroid Redirect Mission is having a rocky time in Congress. Oversight committees in both the House and Senate have authorized space-agency funding for fiscal 2014. But the House version pointedly provides no money for the ARM plan; the Senate version takes no position on the matter.

Finally, it's worth noting that on this day, exactly 10 years ago, a blue-ribbon panel of planetary scientists released a 166-page report detailing the effort required to discover at least 90% of the estimated 500,000 hazardous near-Earth objects with diameters of at least 460 feet (140 m). That was a tall order then — and it remains one today. 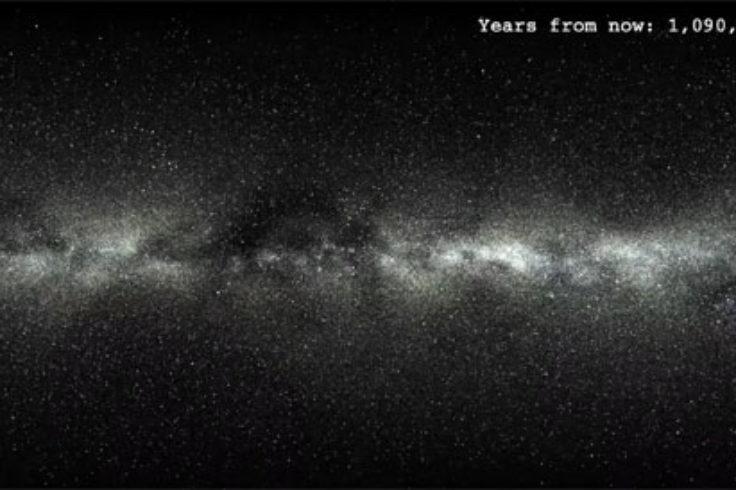 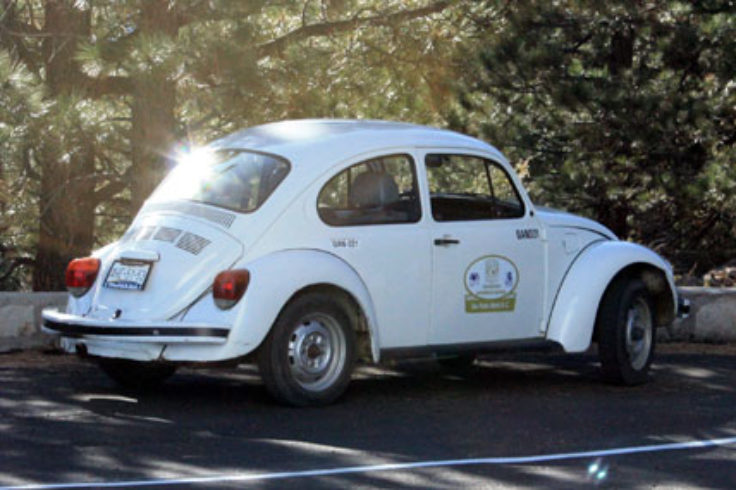