Less than a month after a December 14th launch, scientists have unveiled the first image from NASA’s newest astronomical satellite, the $300 million Wide-field Infrared Survey Explorer (WISE), the subject of Sky & Telescope's December cover story. The image, below, was publicly released at the ongoing American Astronomical Society meeting in Washington, DC. 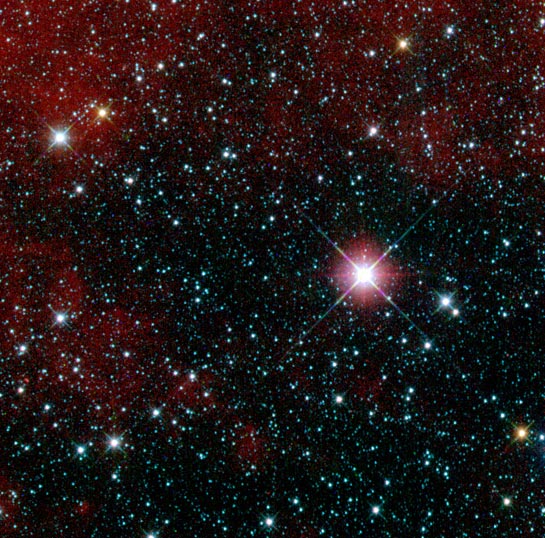 WISE took this 8-second snapshot in Carina shortly after ejecting its cover. The frame is 47 arcminutes square. WISE will gather more than a million similar pictures covering the whole sky. The image was taken in three of WISE's four wavebands; 3.4, 4.6, and 12 microns, shown as blue, green and red, respectively. Larger image.

WISE is designed to perform by far the deepest and sharpest survey of the whole sky yet made in the mid-infrared region of the spectrum. Using instruments cooled by a block of frozen hydrogen, WISE observes at wavebands centered on 3.4, 4.7, 12, and 22 microns (from 7 to 45 times longer than the wavelength of yellow light). It will bring mid-infrared sky maps nearly up to the quality of those that now exist in near-infrared and visible light. The mid-infrared is crucial to many many kinds of modern astronomy — including cool and cold objects of all kinds, highly redshifted objects in the early universe,
and penetration of thick dust in nests of star formation. 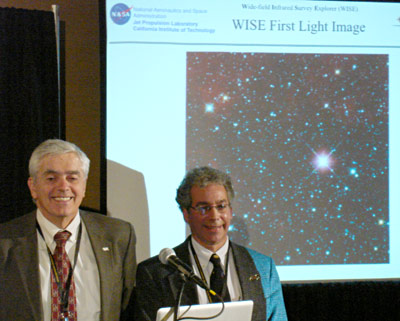 The first-light image shows a patch of sky in Carina three times the area of the full Moon. The 3.4-micron band is shown as blue, 4.7 microns as green, and 12 as red. The image reveals about 3,000 stars, including the bright red giant V482 Carinae. It also shows a small dust nebula, glowing with its own very weak heat, at top and left. The field was chosen for engineering purposes rather than for science, but it demonstrates that the spacecraft and camera are performing to specifications. “We are definitely in focus,” said WISE project manager William Irace of the Jet Propulsion Laboratory.

Once the in-orbit checkout phase is completed in the next week, WISE will begin a 6-month all-sky survey at all four of its infrared wavelengths, taking images similar to the one above. After the 6-month survey is complete, WISE is scheduled perform a follow-up scan of half the sky for another 3 months before its solid-hydrogen coolant is expected to run out.

Even after that, said Irace, “We expect WISE to be functional in the short-wavelength bands, and we’re asking NASA to fund us for another 3 months.”

Besides locating the precise positions of millions of stars and galaxies, WISE will find huge numbers of new asteroids, no doubt including some whose orbits cross Earth’s. It will pinpoint hundreds of the dim "failed stars" known as brown dwarfs and could potentially reveal one or more brown dwarfs closer to us than the nearest star, Proxima Centauri. In essence, WISE is a trailblazer mission designed to identify huge numbers of interesting targets for more detailed follow-up studies with ground- and space-based telescopes, such as NASA's future infrared James Webb Space Telescope, billed as the succesor to Hubble.

“WISE is a pristine new observatory ready to deliver to the astronomical community and world inspiring new pictures and information,” added Leisawitz. “Whenever you survey the sky in some new wavelength band with new capabilities, we’re always surprised. So expect surprises.”

Every body admits that modern life is not very cheap, however different people need money for various stuff and not every man gets enough money. Therefore to get good personal loans and student loan will be good way out. 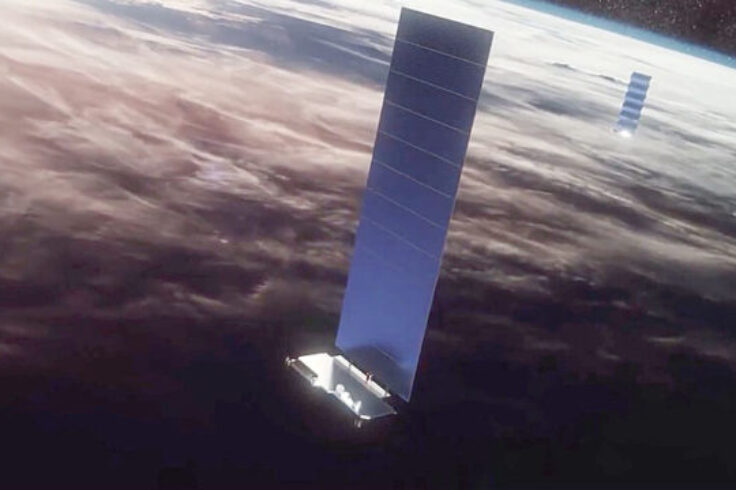