It's been nearly 18 months since NASA's Wide-field Infrared Survey Explorer (WISE) ran out of the frozen hydrogen that kept its detectors cold. But by then the spacecraft had completed its intended mission: to survey the celestial sphere at four thermal-infrared wavelengths with more detail than ever before. 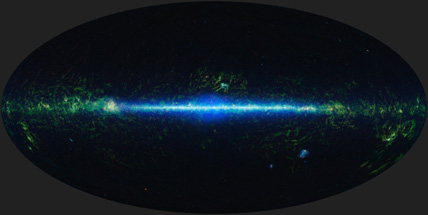 A mosaic of the entire sky, as observed by NASA's Wide-field Infrared Survey Explorer. The plane of the Milky Way glows with whorls of warm dust and other sources, with the galactic center in the middle. Here blue is used to show emission at 3.4 microns, while green and red show energy from dust at 12 and 22 microns, respectively. Click on the image for a larger view, and click here for the full-resolution version. Click here for a labeled version of the map.

On March 14th, the mission team delivered the goods. The spacecraft's all-sky map, totaling some 18,000 images in all, has yielded a catalog of more than 560 million individual objects divided roughly between stars and galaxies. Included as well are thousands of the Milky Way's diffuse nebulae and more than 150,00 objects (mostly asteroids) in our solar system. Mission scientists had already released observations covering half of the sky last April.

This mission has been a huge success, and with a total cost of $320 million, it's a bargain when compared to, say, the $8 billion projected for the forthcoming James Webb Space Telescope. I've been trying trying to come up with some catchy phrase that plays off the spacecraft's acronym in this regard — how about "NASA's WISE Investment Pays Big Dividends"?

Seriously, astronomers will be capitalizing on these rich data for many years. The spacecraft's four infrared detectors, centered on 3, 5, 12 and 22 microns in wavelength, detect energy from cosmic sources too cold to glow in visible light. These typically range in temperature from about –320°F to 1,300°F( –200°C to 700°C). For example, WISE recorded a class of ultracool stars, known as type Y, that astronomers had first glimpsed a few years ago. The deep-infrared view can also look through dust clouds that appear hopelessly opaque in visible light. 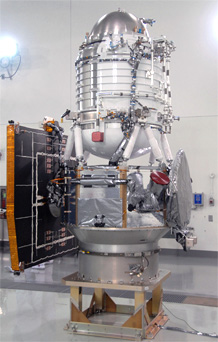 NASA's Wide-field Infrared Survey Explorer, or WISE, awaits launch in late 2009. The large round-ended pod at top is the cryogenically cooled enclosure for the craft's telescope and infrared detectors.

Looking something like R2D2 on steroids, the ¾-ton spacecraft has a 16-inch (40-cm telescope) that delivered a 47-arcsecond-wide field and 6-arcsecond resolution. WISE was launched on December 14, 2009, into a polar orbit 325 miles (525 km) high. The cryogenic coolant for its optics started bleeding off right away, so there was no time to lose: "first light" came three weeks after launch.

By late September 2010, all the hydrogen was gone. The spacecraft quickly warmed up, effectively blinding the two longest-wavelength detectors. But useful observations could still be made at 3 and 5 microns. When an advisory team of astronomers recommended against continuing the mission this way, NASA's solar-system division picked up WISE's option and used it to sweep the sky for asteroids in near-Earth orbits. During this second-chance mission, dubbed NEOWISE, the spacecraft found that the Earth-crossers aren't nearly as plentiful as some estimates had indicated.

Although WISE will be credited with numerous discoveries (a nice gallery of its infrared portraits is here), its long-term value is providing astronomers with a wish list of objects deserving detailed follow-up with targeted observations by NASA's Spitzer Space Telescope and the European Space Agency's Herschel observatory.

It was a sad day in February 2011 when principal scientist Ned Wright and his team switched off WISE's transmitter. But they no doubt take pride in knowing that their spacecraft accomplished what they'd designed it to do — and then some.

Since the cost seems so much less than alternatives, maybe another, similar cheapo mission could reveal some useful data for science. What if the 12 and 22 micron wavelengths were seen: we don't know what's there!

Roger -- WISE completed a survey of the full sky in all four wavelengths before running out of coolant.

But I agree that we should launch as many relatively inexpensive space telescopes as possible. Human missions are much too costly and dangerous and they don't really do better science than a well-engineered robot. I grew up during the Apollo missions, and for sentimental reasons I would love to see video of humans on the Moon and Mars, but rationally it's just not worth it.

The full resolution version and annotated version of this image took a few minutes to download over a DSL connection, but they're worth it! It's cool to see an infrared atlas of things I've seen through my little telescope from the backyard.

Footprint of a Magnetic Exoplanet 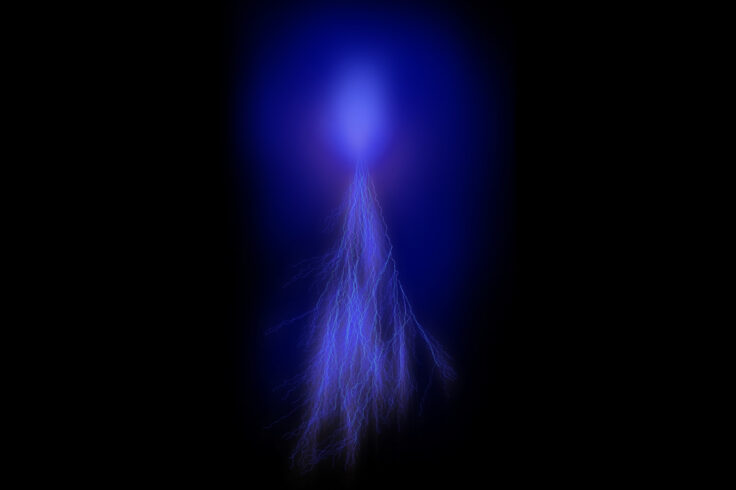