If you're the kind of person who worries that an asteroid might someday come barreling into Earth and cause global catastrophe, yesterday was certainly a "good news" day. NASA scientists announced that the population of near-Earth asteroids (NEAs) — those whose orbits bring them to within 28 million miles (45 million km) of us — is significantly lower than they'd thought.

All along, astronomers have realized that for every big NEA they find, there must be many smaller ones. The problem is that the largest ones, at least 0.6 mile (1 km) across, have been relatively easy to spot because they look brightest in telescopic images. Finding smaller ones has proven more challenging. 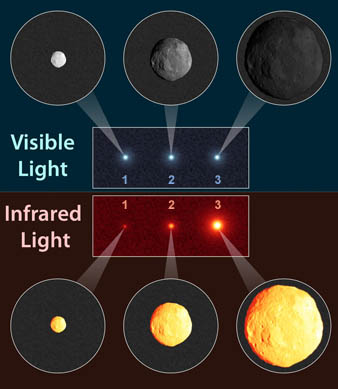 Visible-light images aren't enough to determine an asteroid's diameter — because a small, chalk-white one (1) might look identical to another that's large but very dark (3). But when viewed in infrared light, the heat given off by these bodies' surfaces reveals their true sizes.

Moreover, pinning down the size of a given space rock depends on its apparent brightness, its distance, and a guesstimate about the albedo (reflectivity) of its surface. A big black body and a small white one might appear equally bright. So past tallies have assumed an average albedo of 14%, which is representative of asteroids in general.

Now, thanks to all-sky survey conducted in 2010-11 by the Wide-field Infrared Survey Explorer (WISE), asteroid specialists have a much better estimate of the NEA population. WISE wasn't launched to count asteroids — its primary mission was to map the distribution of infrared sources in the distant universe. But it also proved to be very good at detecting the heat radiating from asteroidal surfaces, whether bright (easy to spot) or dark (much tougher).

Thus was born NEOWISE, a mission add-on coordinated by Amy Mainzer (Jet Propulsion Laboratory). "WISE had four infrared channels ranging from 3 to 22 microns, and we detected most of the NEAs in the two longest channels, 12 and 22," she explains. "With NEOWISE we didn't find every single asteroid out there, but we did find a good, representative sample." 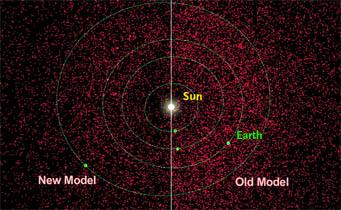 NEOWISE observations indicate that there are at least 40& fewer near-Earth asteroids at leat 330 feet (100 m) across than previousloy thought. The orbits of the four inner planets are shown in green, and each red dot represents one asteroid.

As Mainzer and 36 others detail in an analysis to appear in the Astrophysical Journal, there must be roughly 19,500 midsize NEAs (with diameters between 100 m and 1 km) — far fewer than the pre-WISE estimate of 35,000.

For astronomers trying to keep tabs on all those close-in space rocks, this is a really big deal. "NEOWISE is the most important project of my career," exults Timothy Spahr, who directs the IAU's Minor Planet Center, specifically because WISE not only spotted so many objects (585 NEAs and some 150,000 main-belt asteroids) but also got enough looks at them over time to compute their orbits.

Nothing seen so far is on a collision course with Earth, especially the ones at least 0.6 mile (1 km) across, which are big enough to wreak global havoc. "The good news here is that, with NEOWISE, the worldwide community of astronomers — both amateur and professional — have now found more than 90% of all these really big asteroids." Mainzer and her team now estimate there are 981 ± 19 of them in all, of which 911 have been found. So, finally, astronomers have achieved the Project Spaceguard milestone established by NASA and Congress in 1998.

Until yesterday's announcement, which you can watch here, astronomers had thought that the total population of 1-km asteroids was actually lower, somewhere near 830. But NEOWISE data show that the biggest NEAs are a little darker, and therefore larger, than believed. The revised estimate gets thumbs-up approval from Alan Harris (Space Science Institute), who has been assessing the NEA population for decades. His most recent estimate for the objects at least 1 km across is 990. "I'd say that's pretty damn good agreement," Harris notes.

Still, Mainzer's team needs to reconcile its revised counts with older ground-based surveys. One, based on hundreds of discoveries by LINEAR (an acronym for Lincoln Near-Earth Asteroid Research) and published in 2001, argues that the total count of 1-km NEAs is really closer to 1,250. 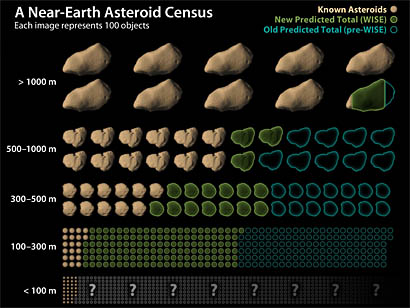 Observations by NASA's infrared-sensing WISE spacecraft have led to a sharp drop in the estimated population of near-Earth asteroids. Each asteroid symbol represents about 100 actual objects. Brown ones represent those already known. The added blue outlines to their right show how many total objects were thought to exist before the WISE survey, and the green outlines show the reduced new estimates based on those data. Click on the image for a larger view.

My money's on the NEOWISE results. The spacecraft had huge advantages over its ground-based competition: no atmosphere, infrared sensitivity, and identical multiple observations with the same detector set.

Now Mainzer & Co. need to let us know how many comets are floating around near-Earth space and what's the real risk of colliding with these rogue objects. That's in the works, she says. So is a reanalysis of the NEA estimates using a lower signal-to-noise threshold (to sweep up more detections) and to use the spacecraft's observations to compute albedos and diameters of well-characterized asteroids in the main belt.

Finally, can we say goodbye to Nibiru? RIP 😉

I dont see any treatment of the data reduction which takes into account the emission of IR as a function of the albedo of the object.
Just as low albedo reduces the amount of reflected light....... the same effect should increase the amount of IR released to the detectors. It's not clear to me how you have eliminated the uncertainty.

Regarding the comment in "albedo and black body radiation," I believe the IR is thermally emitted (blackbody radiation as a function of the temperature) and not reflected, as is the visible light. The data analysis must go into the thermal balance model, which is presumably much better known than the albedos. Someone correct me if this isn't right.

Agreed, it's a thermal emission. But the 'peak' emission on the black body curve shifts according to the temperature of the surface......which is controlled by its albedo.