The impending closure of the United Kingdom Infrared Telescope might be averted if the observatory’s owners can find a buyer. 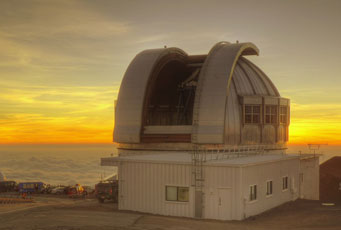 As sun sets on Mauna Kea, the United Kingdom Infrared Telescope opens for a night of observing. On September 30, 2013, UKIRT will lose U.K. government funding and close down — unless the observatory finds new ownership.

Got $1.24 million in your pocket? That’s how much it’ll cost per year to operate a productive, world-class observatory atop Mauna Kea in Hawaii. As announced late last month, the United Kingdom Infrared Telescope (UKIRT) is for sale — a package deal that includes the 12.5-foot (3.8-meter) reflector, its enclosure, and all its instrumentation and support equipment.

This unusual event came about thanks to U.K.’s astronomy funding crisis. In May, the country’s Science and Technology Facilities Council decided to stop supporting two telescopes atop Mauna Kea. The James Clerk Maxwell Telescope (JCMT), which observes submillimeter wavelengths with a 15-meter primary mirror, is scheduled to close in 2014; UKIRT is to be shuttered a year earlier, in September 2013. The two closures make room in the budget for U.K.’s participation in up-and-coming megaprojects, including the ALMA radio array, the Square Kilometer Array, and the 39-meter European Extremely Large Telescope. 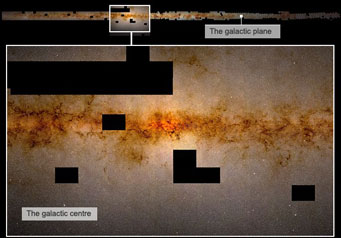 Astronomers put together the Galactic Plane Survey, a very thin strip along the Milky Way's plane, from thousands of images taken by two infrared telescopes: UKIRT in Hawaii and VISTA in Chile. Investigate further with an interactive online tool.

But Gary Davis, director of the Joint Astronomy Centre that operates both of the threatened facilities, and Oxford astrophysicist Pat Roche, who chairs the JAC’s board, won’t let UKIRT close down without a fight. On September 28th, they issued an Announcement of Opportunity offering the observatory to the global astronomical community. The deadline for proposals is November 30th. Read the full prospectus (PDF file).

“This process is completely unprecedented,” Davis says. “I can think of telescopes that have been pensioned off because they are old or small or on poor sites, but this is the first time that a productive, world-leading telescope has been in this situation.”

Built in the late 1970s, UKIRT is currently the world’s second largest telescope dedicated to infrared research, surpassed only by the 4-meter VISTA telescope in Chile. The two facilities are complementary, in that UKIRT surveys the northern sky, and it’s the only 4-meter-class infrared telescope to do so. 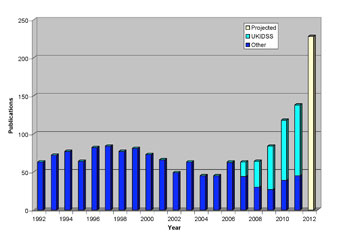 UKIRT's productivity has spiked in recent years, thanks to the all-sky survey, which has proved useful to hundreds of astronomers across disparate fields. It is currently the world's most productive ground-based telescope, says Joint Astronomy Centre Director Gary Davis.

“UKIRT is currently the world’s most productive telescope,” Davis adds, and indeed just as the observatory is threatened with closure, the telescope has come to a peak in productivity in large part due to the all-sky UKIRT Infrared Deep Sky Survey. In 2011 alone, almost 140 papers were based on observations with UKIRT, and nearly 100 of these were based on results from UKIDSS. The newest result, released today, digs through the survey to find distant supermassive black holes shining bright in infrared light. These leviathans would have been hidden by dust if astronomers had been looking for them with visible light.

The survey mapped 7,500 square degrees of the northern sky in three wavebands between May 2005 and May 2012, providing an important infrared counterpart to the Sloan Digital Sky Survey, an all-sky survey done in visible light. An extension of this effort, the UKIRT Hemisphere Survey, will continue until September 30, 2013, though it was originally envisioned as a four-year program.

Whether UKIDSS will continue depends on the proposals responding to the Announcement of Opportunity. Davis says that no Expressions of Interest have been sent in yet, but he has received many inquiries.

“My ideal outcome from this challenging situation is for UKIRT to continue doing world-leading science under new ownership, and for the existing talented and dedicated staff to be kept on,” Davis says. “If those two things happen, then the process will have been a success.”

Why wouldn't they hit up Bill Gates? He's going round now handing out money to whatever he feels is worth his time and money. Considering the billions he has he could fund the place till he died and still have piles left. If he has an interest in astronomy, that is.
Hell, seem to recall he's working with Warren Buffet on a foundation, getting others of the super rich to leave a sizable chunk of their money to their foundation. They could pretty easily fund it with their combined mountains of cash. If someone made a case for it.

Open it up for amateur astronomers to buy a little part of it. Create a bunch of stock and sell it for $100 per share. Have a plaque inside on the wall with the names of donors. I'm good for some shares.

1,24 million is an on going cost. Yearly. And that would not include unforeseen maintenance and possible instrumentation. Interesting idea. However for long term viability IMO they need to find a person, institution, or company to sponsor it.

1.24 is a lot of money, but honestly I surprised! I would have thought it costs a lot more to run! It really is a great bargain for someone to slap a sponsorship name on (like the Discovery Channel did in Arizona).

Good luck to Gary Davis, Pat Roche, and the Joint Astronomy Centre in their search for financial support to keep this uniquely valuable telescope in operation. I trust that Sky and Telescope will report any crowd-funding initiatives. Even without my name on a plaque, I'd be happy to contribute. It's a shame, though, that David Cameron's Conservative government is more interested in cutting budgets than in supporting scientific research.

Why not combine the two ideas? Not just Gates, add Paul Allen, if the two are still speaking to each other, plus a few more billionaires. No plaques, please. Just a polite letter of thanks suitable for framing. Then crowd source. Once the initial operating costs have been received, then establish an endowment with the rest. Rope a university or two in the mix. Add research funding, and voila! It's better than a rummage, bake sale and car wash. Worse comes to worse, gin up a charitable gaming establishment. "Gamble on astronomy. Reach for the stars."

Why not set up a charitable fund for the funding of the running costs...to be honest you need 12500 people to commit to donate $100 per year and voila...job done..

According to Celestron,
this is their 14" SCT 🙂

It a huge opportunity to engage crowdfunding to keep this Observatory with its telecope operational. 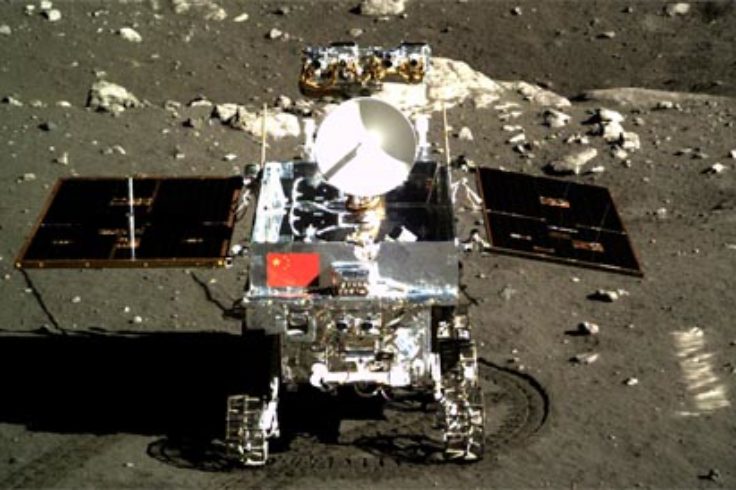 Lots of Lunar Layers Under Chang'e 3

Celebrate Apollo 11 with a Visit to Armstrong, Aldrin and Collins Craters 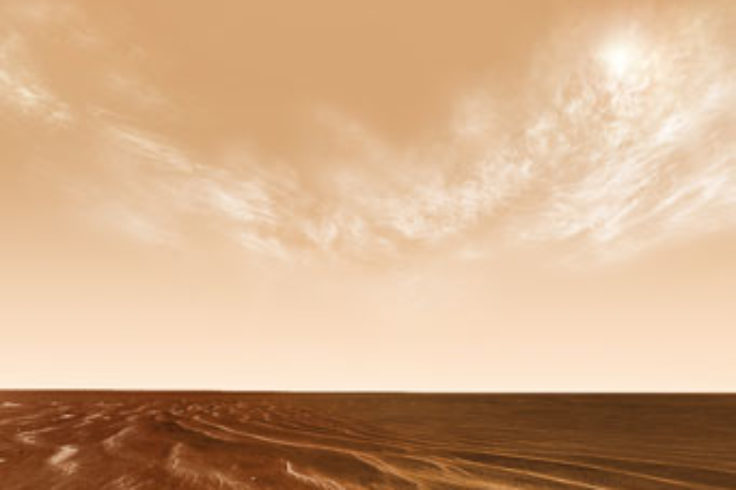