Towering over the island of Maui is Haleakal?, a 10,023-foot-high dormant volcano whose dramatic summit caldera draws 1.3 million tourists per year. As these visitors take in the breathtaking vista, they can't help but notice the compound of large observatories nearby — testimony to the summit's superb conditions for astronomy. 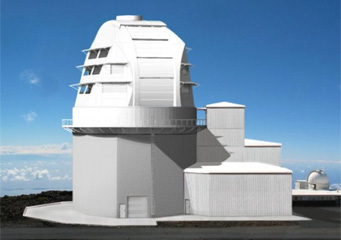 Encased in a gleaming, high-tech enclosure, the Advanced Technology Solar Telescope should be built atop Haleakala on the Hawaiian island of Maui be and ready for full operation by 2017. At far right In this artist's rendering is Mees Solar Observatory, built in 1964.

In Hawaiian culture, Haleakal? is also revered as the sacred "House of the Sun." So it's seemingly fitting that later this year astronomers hope to being construction of the world's largest and most powerful observatory dedicated to the study of our star: the Advanced Technology Solar Telescope.

On January 22nd, the National Science Foundation announced its selection of the Association of Universities for Research in Astronomy to build the ATST. The 8-year agreement totals $298 million, enough to build the observatory and four "first-light" instruments. The construction schedule will surely be helped by an immediate infusion of $146 million from the American Recovery and Reinvestment Act. (What a difference some stimulus funding makes — two years ago AURA's Solar Observatory Council had urged the NSF to scrounge up funding any way it could so that the ATST's planning could go forward.) 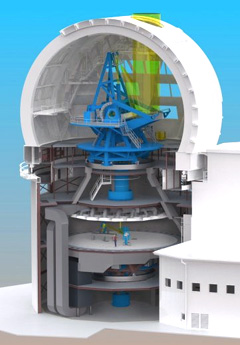 Seen in a cutaway model, the Advanced Technology Solar Telescope will have a primary mirror 13 feet (4 m) across and deliver views of the Sun with 0.1-arcsecond resolution.

Boasting a primary mirror 13 feet (4 m) across and state-of-the-art adaptive optics, ATST will view the Sun with a resolution of 0.1 arcsecond, while spanning the spectrum from 350 nm in the ultraviolet to 28 mm in the far infrared. Such amazing specs should allow astronomers to make never-before-possible measurements of turbulence and magnetic fields in the photosphere, chromosphere, and even incredibly faint corona. No comparable solar scope exists today or is on engineers' drawing boards.

ATST will join a growing armada of observatories atop Haleakal?: the U.S. Air Force's 3.7-m Advanced Electro-Optical System (AEOS) and one of its GEODSS satellite-tracking complexes, and the 2-m Faulkes Telescope North. Mees Solar Observatory, erected in 1964, was the first professional observatory built on the summit.

AURA is starting to line up its construction crews, but not everyone is happy with the prospect of adding ATST's dazzling-white 143-foot-high dome to the summit. Although astronomers picked Haleakal? in 2004 from more than 70 other prospective sites and the project has passed its environmental reviews, some cultural leaders on Maui continue to oppose the ATST.

Representatives for the National Science Foundation have sought to smooth over differences with promises of funding for Maui Community College and other educational activities involving native Hawaiians. Talks with island groups are ongoing. But the project has one final hurdle: it has yet to obtained a conservation district use permit from Hawaii's Board of Land and Natural Resources, which might take months to secure.

I am an ardent supporter of any projects that increase our knowledge of our solar system, and the cosmos, which this certainly will do.

I am, however, very skeptical of any projects such as this that use funding that is supposed to increase economic opportunities for US citizens. Such is the intended purpose of the funds provided through all of the economic stimulus packages.

I personally do not entirely object to projects such as this that use such funding. However, with the current economic situation here in the US, I would demand that that no less than ninety percent (90%) of all the funding secured from private sources, that funding not originating from US tax dollars, and one hundred percent (100%) of all funding provided from the US taxpayer be spent here, in the United States. In the event that such funding allocations are not possible, I would demand the withdrawal of the stimulus monies.

Not trying to be sarcastic, but you do realize that Maui is in Hawaii - in the United States?

I agree with Mr. Ives concerning the desirability of spending economic stimulus funds on projects in the United States. Accordingly, I would hope that Maui could be restored to its status as part of the United States (which status I had not released it had lost) in order to further the proposed solar telescope.

Very well! While writing my first post I had suspicions that this would happen! I, being fully aware that Hawaii is indeed a state, and part of the US, did not expect anyone to misread me. - - What I was referring to, is the fact that most of the intellectuals that build these wonderful observatories usually contract outside the Fifty (count them - all 50!) states to companies in other nations for parts, assemblies and instruments. My point is, that, instead of say, using German or Japanese optics, they should be mandated to spend the funds for such (all) items within the Fifty States. If necessary, say due to unavailability of any item, it should be mandated that they use their funds in assisting our industries in the research and development and manufacturing of these items. The construction administrators and labor force MUST be entirely of local people who are proven US citizens. If this were to delay the construction and cause an increase in total costs, I would not hesitate approving such extended expenditures. However, as in my previous post should any of the taxpayers dollars or one cent over 10%of the private funding, regardless of the national source, be spent outside the US (Hawaii and Alaska included) all government funding should be pulled and all of those funds already spent be repaid with interest to the taxpayers. (Note that I was stationed on a CG Cutter at Sand Island 1977-1979 - Fell in love with Hi.)

Mr. Ives, I'm sorry to hear you want to waste mooney by increasing the cost of this telescope (thereby taking money out of American taxpayers' pockets) and also you want to restrict other countries' ability to buy our exports, and encourage them to boycott our products in retaliation. You do seem to have your geography correct, but I suggest a course in economics might be appropriate. Spending money in the most cost-effective manner increases global (and national) wealth. Wasting money reduces both.

Mr. Odom, thank you for drawing out this excellent point; just look at how the economies of Eastern European countries used to fare under their former protectionist (communist) economic regimes. Besides, the best science results from international collaboration (think Hubble), so the more partners are attracted to this venture, the better.

I wish Poland and Polish astronomers would have the opportunity to collaborate in big scope projects - including AURA. In fact, we are proud having a share of 10% in Southern African Large Telescope project and single observig station with 1,3 biggesst Polish scope near VLT in chilean Andes.

Such money like AURA funding could be like astronomer's paradise for Us. It's impossible that our Government focused on protection of our economy emerging path only could see any profit in Astronomy. Our professional stargazers however, are trying to contribute as much into Astronomy knowledge as they could and as it is possible with available facilities. Our only contribution can by knowledge.