Strap yourself in — you're about to learn about the Rossiter-McLaughlin Effect and why it's hot news among researchers who study alien solar systems.

These days it's routine to discover planets around other stars. A quick check of the authoritative Extrasolar Planets Encyclopedia shows that the tally of extrasolar planets has risen to 446 (not counting the nine eight in our own solar system). So to get the attention of astronomers, a new find really needs to be something special. 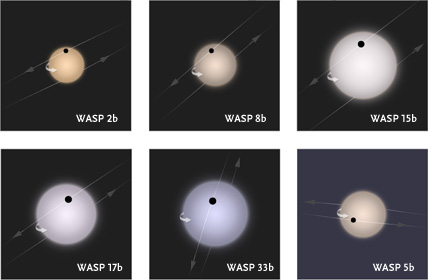 Several recently discovered exoplanets have retrograde orbits — at odds with our understanding of how such planets should form. In these portrayals the stars and their planets are shown to scale (each frame is three solar diameters wide). WASP 5b, depicted at lower right, orbits its star in a â€œnormalâ€ (prograde) direction. Click here for a larger version.

At the Royal Astronomical Society's ongoing national meeting, astronomers have announced the discovery of nine transiting extrasolar planets. These worlds are termed "hot Jupiters" — they are huge and very close to their host stars — and their orbits are oriented such that each crosses its star's disk as seen from Earth. Every crossing registers as a slight dip in the star's brightness. To date, 73 transiting planets have been identified, so the discovery of several more of them isn't itself particularly newsworthy.

Topping the leader board in transiting-exoplanet discoveries is a remarkably productive program known as SuperWASP. Initially called WASP (Wide Angle Search for Planets) when conceived during the 1990s by observer Don Pollacco, SuperWASP has been monitoring the sky using arrays of CCDs attached to telephoto lenses. In this way, the team has found 26 extrasolar planets to date.

The "news" in this announcement is that some of the latest batch of extrasolar planets have orbits tilted so extremely that they're moving retrograde, that is, going around in directions opposite the way their stars are spinning. It's fair to say that these discoveries have literally turned the long-held view of how planets form on its head. Theorists have long assumed that stars and their planetary companions assemble from spinning disks of gas and dust, which leads to planetary motion in the same sense as star's rotation. 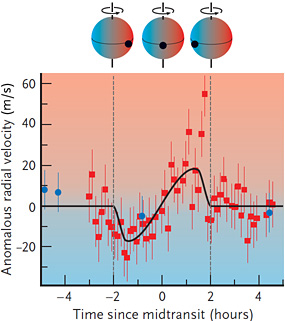 If a planet orbits its star in a retrograde direction, it covers part of its star's redshifted limb at the start of its transit and part of the blueshifted limb at the end. The result, called the Rossiter-McLaughlin Effect, is a shift in the star's apparent radial velocity (its motion toward or away from Earth) that can be detected spectroscpically.

SuperWASP's observers can't actually resolve a planet transiting its star, so how do they know some are moving retrograde? The answer is depicted at right. As a star spins, the spectrum coming from the limb moving toward Earth is blueshifted and that from the receding limb is redshifted. Ordinarily these spectral shifts would be equal in strength.

Throw in a transiting hot Jupiter, and the result is a subtle spectroscopic signature called the Rossiter-McLaughlin Effect. If the planet has a "normal" (prograde) orbit, it begins each transit by covering part of the star's blueshifted limb, and this creates a spectral mismatch that can be measured. Conversely, a retrograde planet begins its transit on the redshifted limb, as the plot shows, again creating a distinctive spectral signature. Still, the effect is subtle, requiring sensitive radial-velocity measurements made with a battery of spectrometer-equipped telescopes.

How these massive, close-in worlds got going backward remains a mystery. In dynamicist-speak, it's a lot easier to change a planet's orbital period or eccentricity than to alter its inclination. In a press release from the European Southern Observatory, "The new results really challenge the conventional wisdom that planets should always orbit in the same direction as their stars spin,' says Andrew Cameron (University of St Andrews), who presented the new results at the RAS meeting. Conceivably massive planets can interact in a way that causes one to reverse course, but logistically it's a stretch.

Let me point out that Sky & Telescope readers got wind of wrong-way finds by SuperWASP and NASA's Kepler spacecraft in a December 2009 article by editor-in-chief Robert Naeye. As exoplanet specialist Joshua Winn (MIT) notes there, "Now we've gotten a glimpse of the weird, wild systems we've been hoping to find all along. Theorists will have a lot of fun trying to get the planets in these orbits."

This was a good read. Yes the crop of exoplanets documented (446) does raise plenty of questions. 214 exoplanets are class G types in the batch of 446 reported. Their average exoplanet mass is 2.61 Jupiters with a median of 1.5 Jupiters and mode of 0.48 Jupiters. The min reported for this group was 0.016 Jupiters and max 25 Jupiters. This raises questions about how our earth formed around a class G star and our ecliptic today lacks so much more mass that could clearly be there as seen around other class G stars. Now more reports of retrograde orbits are being uncovered for some exoplanets.

Should we thank God for our habitable earth or is science committed to the belief that random particle collisions did it all? Food for thought.

This was a good read. Yes the crop of exoplanets documented (446) does raise plenty of questions. 214 exoplanets are class G types in the batch of 446 reported. Their average exoplanet mass is 2.61 Jupiters with a median of 1.5 Jupiters and mode of 0.48 Jupiters. The min reported for this group was 0.016 Jupiters and max 25 Jupiters. This raises questions about how our earth formed around a class G star and our ecliptic today lacks so much more mass that could clearly be there as seen around other class G stars. Now more reports of retrograde orbits are being uncovered for some exoplanets.

Should we thank God for our habitable earth or is science committed to the belief that random particle collisions did it all? Food for thought.

Just like planets' axis can wobble over time, is it possible that the star's orientation wobbled to the extreme so that, although the planet continues to orbit along the same plane it always has, the star has tipped it's axis?

Could this just be a selection effect? Retrograde planets close enough to their parent star should lose energy through tidal interaction(for the same reason, our pro-grade Moon gains energy from the Earth), so their orbits should decay and they move ineven closer to their parent star. As the transit method (and also most other methods) are more sensitive to planets close to their host stars, they should reveal an unproportional number of retrograde planets.

I agree with the exo-planetary orbits being inertially correct. The primary star axial rotation having been corrupted by some external mass-merging resulting in the combined primary axial tilt ranging to 180 degrees.

For example Venus consumed something that reset its evolutionary clock and sent it retrograds, also Neptone is knocked on it's side from something aparently greater than coriolis effect in it's fluid layers.

What's the big deal? Let's say that these planets probably formed normally (prograde orbit), then had one OR MORE major encounters with other planets to be flung into an odd (retrograde) orbit. The other planet involved might have been flung clear out of the system, or fallen into the star. Read the recent S&T article on Solar System orbital instability. We know that the early life of a stellar system can be very chaotic. Instead of the early Earth colliding with a postulated Mars-sized planet to form the Moon, say it was a near-miss that flung the other guy into a retrograde orbit. Over time, any such planets in our Solar System would probably have their orbits severely disrupted by Jupiter, and either flung out of the system or into the Sun. The bottom line is that no big change to planetary formation is needed, hyperbolic headline or no (shame on S&T for sensationalism!).

I don't think that a stellar axis will flip that easily. A plantary axis can easily flip during planetary formation, when large planetesimals collide with newly forming planets. Also tidal interaction with the Sun can make axial tilts vary widely (don't know if that could turn them 180Â°, though). However, to change the axial tilt of something as massive as a star, you will need another star or brown dwarf hitting it in the right place and/or direction. That could happen in double star systems, but then you need a retrograde stellar partner to start with, which is even harder to explain than a retrograde planet.

It's more likely that orbits of planets change or planets are swapped between stars, if two stars have a close encounter (but no collision), than a stellar axial flip, I would say. The decay of the retrograde orbit will then make such planets more easily detectable with current methods, so we should find proportionally more of them than then there really are, compared to prograde planets. If this idea were true, we should find even more retrograde planets around fast rotating stars, which exert a higher tidal force on the planets than slow rotators.

This is a good crop of comments here. I think they illustrate significant aspects of the problem.

There are so many highly eccentric/highly inclined orbits amongst extrasolar planets that it's beginning to bode ill for alien life. It's hard to imagine life flourishing on systems which have been subjected to so much chaos. But, on the bright side, this is probably a selection effect. We are finding systems with very large planets. The larger the ratio of sun to planets, the more unstable the system is.

Unfortuneately, the prevalence of large planets is beginning to seem real. Maybe we were lucky to have a star that formed near a supernova which blew most of the mass away before the planets condensed. That would mean life is rare and precious, so -

Am I missing something here? If these were moons we would be talking capture (complex as that may also be). Why is planetary capture from a close stellar encounter not the first hypothesis to be evaluated (or has it already been eliminated in this case?). 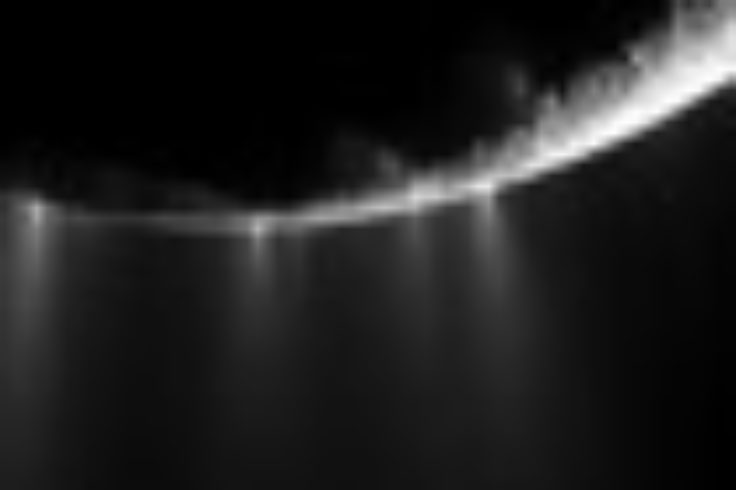