After 20 years of planning, the NuSTAR X-ray telescope launched today from an island in the Pacific. 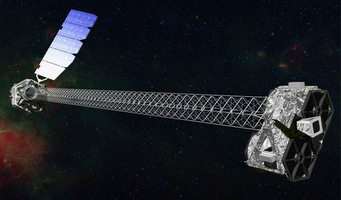 Artist's concept of NuSTAR in orbit. The 10-meter (30-foot) mast separates the optics modules with the nested mirrors (right) from the digital camera (left). The background image is a view of the Galactic Center as seen by the Chandra X-ray Observatory at lower X-ray energies.

NuSTAR, the first telescope to focus very high-energy X-rays, launched successfully from Kwajalein Atoll at 9:00 a.m. Pacific time. NuSTAR will collect X-rays in the energy range of 6 to 79 keV, similar to the energy range of medical X-rays. Most X-ray astronomy has been done at lower energies, where X-rays are less difficult to focus. But rather than penetrate skin and muscle to look for broken bones, NuSTAR’s X-rays penetrate dust and gas to reveal supernova remnants and the flicker of gas around feeding black holes, where high-energy processes abound

To place NuSTAR in an equatorial, low-Earth orbit, one that will avoid interference from energetic charged particles trapped in Earth’s magnetic field, the launch had to take an unusual form. An L-1011 Stargazer aircraft climbed to 40,000 feet before dropping a Pegasus XL rocket strapped to its belly. The rocket fell for 5 seconds before igniting the first of three stages to carry NuSTAR into orbit. Watch a video of a Stargazer-Pegasus launch here: