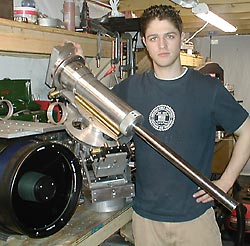 Each year since 1993 the Astronomical League has recognized outstanding astronomy achievements by US high-school students through its National Young Astronomer Award. This year's top winner is John Davis, a senior at Penfield High School in Penfield, New York.

A member of the Rochester Astronomy Club, Davis is cited for his accomplishments in telescope making and astrophotography. In addition to grinding 10- and 12.5-inch primary mirrors and building a backyard observatory, at age 14 he began to machine telescope parts and mounts from scrap in his school's workshop as well as his family's basement. Soon he turned this after-school hobby into a successful commercial enterprise. His company, Gemini Instruments, has sold custom-made equipment to amateur astronomers in the US, Hong Kong, Canada, and Australia.

Davis's NYAA prize consists of a plaque, an all-expense-paid trip to the League's 57th national convention in Berkeley, California, this July, a 10-inch LX200 GPS telescope donated by Meade Instruments Corporation, a lifetime observing pass to McDonald Observatory, courtesy the University of Texas, and complimentary membership to the International Dark-Sky Association.