A Simple Home Observatory in Your Backyard 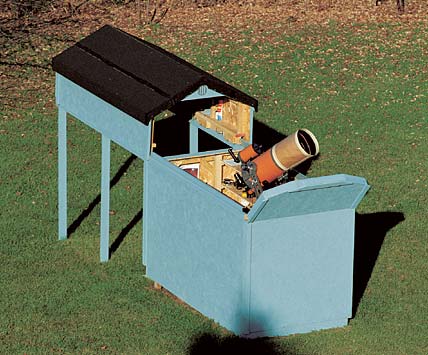 Dennis di Cicco's 'doghouse' observatory progressed from an idea to a working observatory in less than three weeks during the fall of 1982. You too can quickly build a basic telescope shelter.

Backyard observatories have always been a part of amateur astronomy, but they seem to have had a surge in popularity during the last decade. Much of this growth, I believe, is rooted in today's hectic lifestyles. The chance to observe at a moment's notice — when weather and freedom from personal commitments are in sync — makes a home observatory in your backyard especially attractive.

We've presented a wide range of observatory styles in Sky & Telescope over the years (and several appear on SkyandTelescope.com). But our readers have shown a disproportionate amount of interest in my tiny "doghouse" home observatory, which was first mentioned in a single paragraph in our December 1999 issue. Small, cheap, easy to build, and remarkably well suited to modern Schmidt- and Maksutov-Cassegrain telescopes, the doghouse has generated so many inquiries that we've decided to document its construction in some detail. 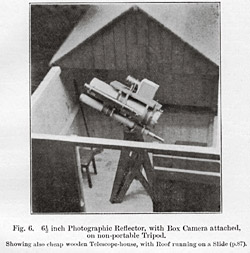 Taken from a 1921 astrophotography book by H. H. Waters, this photograph inspired the doghouse's design and construction.

Like many of my best ideas, credit for this one belongs elsewhere. I was well into planning a much larger home observatory when I came across a 1921 book called Astronomical Photography for Amateurs. There author and English amateur H. H. Waters documented his "cheap wooden Telescope-house." A pier destined for my main observatory was temporarily mounted in my backyard, and a small roll-off-roof shelter for it seemed like an easy project — one that would quell my growing desire to get started actually building something.

Doghouse construction consumed three weekends and a few evenings in between. The real surprise, however, was how practical the tiny building turned out to be. The doghouse proved so enjoyable that it slowed work on the main observatory by several years. I spent hundreds of happy hours in the doghouse from its completion in early December 1982 until spring 1989, when my main observatory finally saw first light.

Admittedly, the doghouse was rather cozy for a polar-aligned 11-inch Celestron Schmidt-Cassegrain telescope and an observer. But its dimensions can be altered to suit your needs.

Although the doghouse's footprint was only 4 by 8 feet, it could accomodate both me and the array of books, atlases, and accessories that I typically take under the stars. It also had enough room for a desktop computer and monitor, and thus is a viable design for those interesting in CCD imaging. Nevertheless, a shelter as tiny as my 4-foot-wide doghouse works only for compact Cassegrain-type telescopes, since they can be set up in polar-aligned mode on a pier at one end of the narrow observatory with the building's long axis oriented on a north-south line. With this arrangement the observer stays relatively stationary as the scope is pointed around the sky. (That being said, at times my 11-inch Schmidt-Cassegrain's eyepiece came uncomfortably close to the side walls. More than once I opted to step outside the building and lean over the wall to view through the scope!)

The doghouse pictured here would not be practical for an altazimuth scope, since this configuration requires access to all sides of the telescope or pier. A larger, 8-foot-square footprint should work, though. And an even smaller doghouse might be suitable for a remotely controlled telescope. 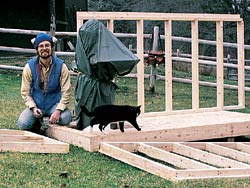 The basic observatory box was built in one day using lumber that had previously been cut to size. Click on the photo for more construction steps.

Intended from the outset to last only two seasons, the doghouse home observatory was somewhat of a contradiction — parts of the structure were overbuilt, while others were inadequate. Thus, if I were to do it over again with permanence in mind, I'd make a few changes. Foremost would be the foundation. I anchored the doghouse in place using short lengths of standard 2-by-4s cut to a point and sledgehammered into the ground. By the time the building was eventually removed, these stakes had completely rotted. Done right, the building would have been secured to posts made of pressure-treated wood set in concrete-filled holes. My original rail supports were also regular 2-by-4s pounded into the ground, but these quickly rotted and were replaced with pressure-treated 4-by-4s.

Local building codes vary, but any foundation suitable for a garden shed would serve for a small home observatory. People at building-supply stores can advise you on an appropriate foundation for your locale. (By the way, when discussing a home observatory project with these folks or town building officials, it's best to call the building a "storage shed" since an "astronomical observatory" will often bewilder people and may not mesh with local building regulations.)

Another change I'd make to the doghouse design involves the framing. Standard construction techniques call for wall studs placed on 16-inch centers, which is what I used for the doghouse. Putting studs on 24-inch centers would be fine for such a small building and save a few dollars in the process. I'd also save on materials by using 24-inch spacing for all the roof framing, but I'd keep 16-inch spacing for the floor joists.

Last, I'd choose a better grade of siding than the waferboard used on the doghouse. With a good coat of paint and proper maintenance, exterior-grade waferboard will last a long time, but experience suggests that the extra expense for plywood siding would be money well spent, especially if you’re not up for annual scraping and repainting. Waferboard or other inexpensive sheeting is still suitable for the floor and roof as long as the latter is covered with asphalt shingles or an approved roofing material. I used a standard rolled-roofing product that currently costs less than $12 for a 100-square-foot roll — enough for two doghouses! 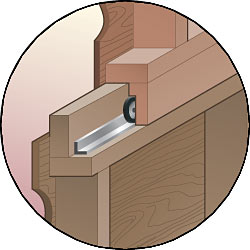 Although the doghouse was basically a build-it-as-you-go project, a few sketches were needed to sort out some specific measurements. Di Cicco used surplus steel rails, but the design detailed here uses commonly available materials. Click on the sketch for a cross-section plan.

My doghouse required seven sheets of 4-by-8-foot building material with a minimum of waste. The floor and two long walls were one sheet each, while the end walls were made from one sheet cut in half. Each half of the roof and its corresponding side wall were made from a single sheet. The seventh sheet was for the roof's north end and fold-down southern panel, and there was enough scrap left over for a set of shelves in the home observatory. Framing was all done with 2-by-4s except for the floor, which used 2-by-6s. The 3-by-4-foot access door was in the back (northern) wall.

The roof rolled on eight wheels made for garage doors. Sold as replacement parts, a pair of wheels currently costs about $5, and the ball-bearing design makes the roof easy to move even when supporting a full snow load. My original building had the wheels running on steel U-channel track left over from a previous project. Garage-door track would be a good alternative, but it is not a stock item at building-supply stores in my area. Thus the design I propose in the diagram above uses aluminum angle stock, which is readily available. Four 8-foot lengths of 1-inch angle made from 1/8-inch-thick stock would serve as the load-bearing portion of the track for the wheels to ride on. Another length of angle stock mounted above the wheels would prevent the roof from lifting off in high winds.

In climates where ice and snow might clog the track, one option would be to place a length of electric heat tape behind the aluminum track in a groove routed into the wooden support. This tape, commonly sold to keep water pipes from freezing, would be needed only along the portion of the track that extends outside the building. I used to chip accumulated ice off the doghouse tracks with a screwdriver, but it's amazing how tenacious ice can be, and I'd certainly use heat tape if I built a new doghouse.

At first I worried about keeping a building with a moving roof weathertight. But my fears proved unfounded. Only during the most extreme wind-driven rains did a small amount of water work its way through the seams. While I didn't bother with it, you can always add weatherstripping to any points that are prone to water entry. 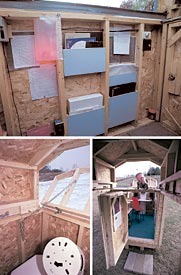 In order to clear the telescope, the south end of the doghouse roof was left open. Thus, the roof itself is like a squat covered bridge with the north end solid. A fold-down panel on the building's southern wall gives the telescope access to the horizon. The area between the wall studs was surprisingly useful for storing star charts and the like. It's amazing how efficiently space can be used when you're forced to work in a cramped area. It was wonderfully convenient to sit at the eyepiece and have everything in the home observatory within arm's reach.

Wondering how much it would cost to build the doghouse today, I made a trip to the local Home Depot. Assuming a proper foundation and rail supports, the basic building could be finished for less than $275 (1999 prices) using waferboard and framing on 24-inch centers. The cost goes up only a little if you switch to pressure-treated lumber for the floor joists, which is advisable.

Experience suggests that it's a good idea to also budget at least $50 extra to cover the costs of little items like a door lock and miscellaneous hardware that is needed for any building project. Depending on how fancy you get, lighting and wiring can add another $75 to the total. 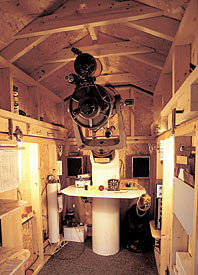 The magic of wide-angle photography made the doghouse appear spacious here. But even though it was modest in price and size, it served its builder for nearly seven years.

How big a job is something like the doghouse? For anyone with even a modest amount of skill, it's a pretty easy project. My rule of thumb is that if you can handle a tape measure, circular saw, and hammer, and if you think you can build it, you will almost certainly succeed.

Bookstores and home centers are filled with how-to guides for the weekend do-it-yourselfer. There are numerous books on basic carpentry, and I certainly suggest one on simple home wiring for anyone who’s never tried this type of work before.

I highly recommend two low-cost books that are filled with good ideas and will help translate construction jargon. They cover every aspect of a building project from laying out the site through basic interior finish work but do not cover plumbing or electrical wiring. The first is a Dover reprint of a work prepared by the U.S. Navy called Basic Construction Techniques for Houses and Small Buildings Simply Explained (the title says it all). It has good sections on concrete and masonry work and can be ordered online from Amazon. The other is Leroy O. Anderson’s How to Build a Wood-Frame House. It is out of print, but you
usally can find a copy for less than $20 by searching the used-book services on the Web. A good place to start is Abe Books.

If you decide to build a doghouse or other home observatory, please send me a photograph or two of the finished project (dicicco@SkyandTelescope.com or Dennis di Cicco, Sky & Telescope, 90 Sherman St., Cambridge, MA 02140 USA). We may publish a roundup someday, and it would be nice to include any innovations you may come up with.

The Reliability of Visual Observing 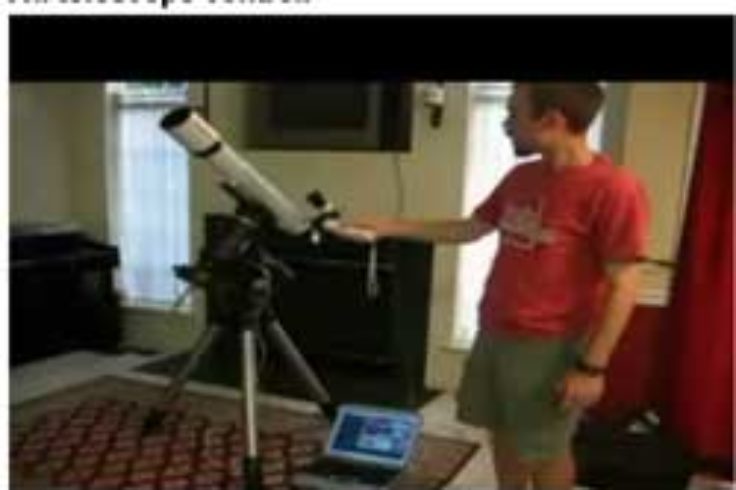