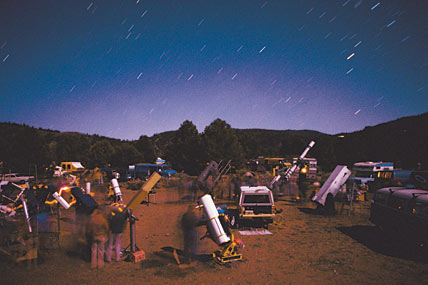 Wherever amateur astronomers meet — whether online or in the field — telescope performance is a hot topic. These enthusiasts are at the RTMC Astronomy Expo in Southern California.

Amateur astronomers are a gregarious lot. Whether at club meetings or in Internet newsgroups, they share ideas, observations, and experiences, usually with generosity and good humor. Many a newcomer to our hobby has benefitted from this casual exchange of ideas. The flip side of the coin is that the same forums provide fertile breeding grounds for myths that are perpetuated and redistributed, often without challenge. Here is my selection of notoriously long-lived telescope myths. Each contains a grain of truth. Yet they are demonstrably incorrect and may have caused many a telescope owner unnecessary effort, expense, or angst.

"Pyrex telescope mirrors are better than those made from plate glass." 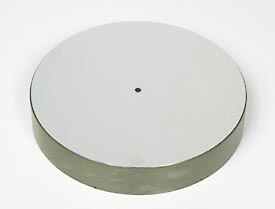 Pyrex or plate glass? You might be able to tell from the photo what this primary mirror is made of, but you won't at the eyepiece.

The primary mirror at the heart of a reflecting telescope is typically made from either Pyrex or ordinary plate glass. Both materials can be fashioned into excellent mirrors. So why is it so commonly held that Pyrex mirrors are inherently superior? There are two main reasons.

First, because plate glass is less expensive, it is presumed inferior — you get what you pay for, right? However, in truth the cost of the substrate material has little to do with the price of the finished mirror. Most of the expense lies in turning that piece of glass into a working optical component.

Second and more to the point, unlike plate glass, Pyrex is a low-expansion material. This means that a mirror made from Pyrex is less prone to warping when it is at a different temperature than the air surrounding it. The ultraprecise curve on the surface of a Pyrex mirror isn't as severely deformed when the telescope is moved from a warm house into the cool night air.

This relative insensitivity to temperature changes also has its advantages when the optician carefully refines (or figures) the curve on the mirror's polished surface. When the glass is worked, a certain amount of heat is generated by friction between the tool and the mirror. Because this heat will deform Pyrex less than plate glass, the optician doesn't have to wait as long to test the mirror and proceed to the next figuring step. Since a commercial firm presumably wants to minimize the time spent on an individual mirror, some amateurs assume that a Pyrex mirror will turn out better than one made from plate glass.

This sounds logical enough, but I have seen no evidence of it in the dozens of mirrors I have tested over the years. In any case, these attributes are more of an issue for the optician than for the mirror user. If you're making a mirror, Pyrex does have its advantages, but if you're simply buying or using one, these characteristics really shouldn't come into play.

"But don't Pyrex mirrors cool faster than plate-glass ones?" Yes, but the difference is not nearly enough to be significant in most amateur-size mirrors. In theory, Pyrex should cool about 20 percent faster than plate glass. But other factors — notably the mirror's thickness and the design of its cell — are far more important.

As astronomer and inventor Alan Adler has rigorously demonstrated, active cooling is one key to reflector performance, regardless of whether the primary mirror is made from Pyrex or plate glass. Here twin computer CPU fans blow across the face of an 8-inch-diameter, 7/8-inch-thick plate-glass mirror.

There's yet another reason why glass type makes little difference: when it comes to thermal problems, your main enemy is the layer of warm air in front of the primary mirror. No mirror, regardless of glass type, will perform adequately until this "boundary layer" goes away. Temperature-related deformations of a mirror's figure are minor compared to the boundary layer's deleterious effects. Venting the primary mirror — ideally with fans, as pictured here — can help you get rid of this problematic air layer.

The bottom line? Pyrex is slightly better than plate glass in theory, but not in practice. Ventilation is far more important.

"Large telescopes are more impaired by light pollution than small ones." 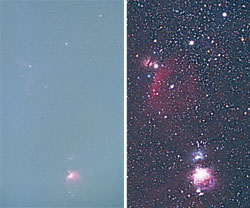 Left: Because the contrast between a deep-sky object (like M42 in Orion's Sword) and the background sky is fixed, large apertures are not more disadvantaged by light pollution than small ones — the advantages of aperture are in full effect. Right: In dark skies, all telescopes perform to their full potential.

This claim has no basis whatsoever in truth, but it's pretty easy to see how it arose. The "logic" behind this myth is that since large telescopes gather more light than small ones, they must also collect more unwanted light (light pollution). This is true, but the real issue is image contrast. The brightness ratio between a galaxy like M31 (say) and the background sky is the same regardless of telescope size. All telescopes are equally impaired by light pollution compared to what they would show under a dark sky. A large telescope's advantages — superior light grasp and resolution — are the same under bright skies and dark ones. 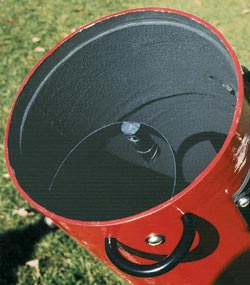 Sky & Telescope editor Gary Seronik's 6-inch f/9 planet-viewing Newtonian features a secondary mirror with a minor axis of only ¾ inch — illustrating that long-focus reflectors can be optimized to use very small diagonals. However, this small secondary trades edge-of-field illumination for minimal diffraction. A larger diagonal would be a better choice for general observing.

Telescope makers agonize over the size of their secondary mirrors the way golfers fret about choosing the right club for a given shot. But the optimal size for a particular telescope's secondary mirror hardly depends at all on the f/ratio of the telescope's primary mirror. For example, all other things being equal, the same 1-inch secondary mirror will serve well for 6-inch reflectors from f/4 to f/10, in all cases producing essentially the same edge-of-field illumination — one of the most important parameters to consider when you are selecting a secondary mirror. (An important clarification: this logic applies to telescopes used for eyeball observing, not astrophotography.)

The point is illustrated here. While the fully illuminated field of the long-focus reflector is greater than that of the short-focus one, the illumination drops off much more suddenly in a long-focus telescope once you get past the fully illuminated zone (the zone within which one sees all the light gathered by the primary mirror). What does this mean for makers of long-focus Newtonians? Unless they are willing to lose a lot of light at the edge of the field of view, they probably are going to wind up choosing a secondary mirror about as big as they would on a much faster (lower f/ratio) instrument.

You can fine-tune the size of the secondary to suit a particular observing program. Planetary observers are fanatical about keeping the size of the secondary as small as possible to minimize image-harming diffraction effects, while variable-star observers want larger diagonals for larger fully illuminated fields (which ensure that the brightness of a variable can be reliably compared with that of any other star in the field). But it is a gross oversimplification to say that short-focus reflectors need big diagonals and long-focus reflectors need only small ones.

"Large scopes are more adversely affected by seeing than small ones." 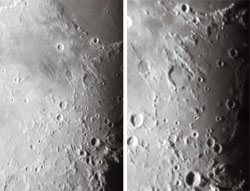 Both these images of the Moon's Ariadaeus Rille region were taken within minutes of each other using the same telescope. However, the lower resolution of the left-hand image masks the deleterious seeing effects that an experienced observer will discern in the higher-power right-hand view. This parallels frequent comparisons between large and small telescopes: the small scope's reduced resolution conceals atmospheric blurring effects that are apparent in large scopes because the latter can resolve finer details.

The idea behind this myth is that when it comes to planetary observing, there is little point in getting a large telescope unless the seeing conditions at your observing site are unusually good. Some actually claim that a small scope can outperform a large one on nights of mediocre seeing.

I call this assertion a myth for two reasons. First, my own observations do not bear it out. Second, no one has proposed a plausible mechanism for it. Telescopic resolution is limited by the weakest link in a chain made up of optical quality, atmospheric steadiness, telescope design, and the observer. No doubt, some small scopes give better views than some large ones, but this can easily be ascribed to factors having nothing to do with the atmosphere. In particular, poor collimation and poor thermal characteristics often plague large reflectors.

When I first heard that small scopes could beat out big ones, I checked it out for myself. At the time my principal telescope was an optically good 12½-inch f/5 reflector. I built a 5-inch-diameter off-axis mask that could quickly be placed at the front of its tube, making it into an unobstructed 5-inch reflector. Over the course of several years I took this mask with me to every observing session and compared full-aperture planetary views with those seen with the mask in place. I did this on nights of good seeing, okay seeing, and poor seeing. Not once did the reduced-aperture view show greater detail than the full-aperture view.

Admittedly, when the seeing (or atmospheric steadiness) was below average the off-axis mask produced an aesthetically pleasing view. But this did not translate into greater detail — though it's easy to understand how a casual glance would give this impression. Most often I would wind up using my telescope's full aperture because even on nights of substandard seeing, occasional brief moments of stillness would allow me to see details that simply could not be seen with the aperture mask in place.

The Tip of the Iceberg

The myths discussed here represent only the tip of an iceberg — many more are in circulation.

Many of these myths rely on anecdotal evidence and invalid comparisons. When evaluating provocative claims, let's all do our best to combine well-established optical theory with unbiased first-hand observations. Ultimately, all astronomers will benefit.

"Large scopes are more adversely affected by seeing than small ones."
Its not myth..it has scientific solid bases