Almost every industry has its own specialized language through which its professionals hope to communicate precisely and efficiently. Lighting engineers are no exception. For them, it’s important to distinguish between how much total light shines out of a lamp, how much goes in a specific direction, how much falls on some object, and how much is reflected by the object.

The following crash course will help you decipher the basic jargon of lighting and allow you to speak more precisely to community leaders and municipal engineers about proper lighting techniques. To start, you’ll need to know the three Ls — light, lamp, and luminaire. Light is the visible-wavelength energy that enables you to see. Lamp refers to the bulb or other light-producing source. Luminaire is the lighting fixture; it’s the combination of the bulb, socket, reflectors or lenses, ballast, and housing.

The total amount of light emitted by a bulb is its luminous flux, as measured in units called lumens. Imagine the sphere of light leaving a bulb; measure the flow of all that light and you’ve got the luminous flux. A typical 100-watt incandescent bulb puts out roughly 1,800 lumens, while a high-pressure-sodium street lamp of the same wattage emits about 8,550 lumens. 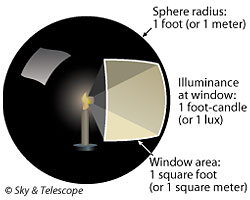 One candela is the intensity of light created by a single candle. That source, placed at the center of a black sphere, creates an illuminance of 1 lux at a radius of 1 meter (or 1 foot-candle if the radius is 1 foot). The amount of light escaping from a one-radius-wide square equals 1 lumen, or 12.57 lumens for the entire sphere.

Related to luminous flux is luminous intensity. This metric, measured in candelas (cd), is the intensity of a light source in a particular direction. A candela is equivalent to one lumen emitted within a solid angle known as a steradian. (There are 4π, or 12.57, steradians in a sphere.) You could think of a cone of light shining in a particular direction when considering luminous intensity.

Illuminance, the amount of light that actually falls on an object, is intimately related to luminous intensity. Picture that light cone of luminous intensity; more light per unit area will fall on an object that’s close to the luminaire than on an object far away. Illuminance is the density of light on a surface, and it is measured in units of lumens per square meter (lux, abbreviated lx) or lumens per square foot (foot-candles, abbreviated fc). Assuming that a 100-watt incandescent bulb radiates its light equally in all directions, a flat, bulb-facing surface 3 meters (10 feet) away receives an illuminance of about 15 lx, or 1½ fc.

The light that your eyes see — that is, light reflected by a surface or transmitted through it in the direction of an observer — is luminance. This is how bright a tree, roadway, or other object appears to you. However, luminance is not equivalent to brightness, which is a subjective estimate. Luminance is a measured or calculated quantity, expressed either in candelas per square meter or candelas per square foot. Luminance is directly related to illuminance, with the object’s reflectivity (or transmissivity) factored in.

Lighting science is rather complex, and dozens of other terms exist, but the ones presented here are fundamental. Each concept, and its associated unit of measurement, is important in its particular context. Lamps are rated in lumens, the measure of their total light output. Lines of equal lux (or foot-candles) are drawn on a photometric plot to show how much light is hitting the ground and where. Those foot-candles are only part of the picture, however; the reflectivity of the objects being illuminated must also be considered.

For authoritative and technical definitions of all these concepts, see the IESNA publication Lighting Metrics (TM-1-94, $15), available for download at www.iesna.org.