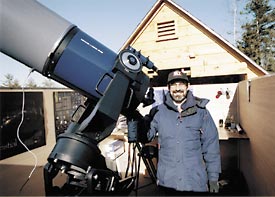 Within weeks of driving the last nail into his Danbury, New Hampshire, observatory, S&T editor in chief Rick Fienberg was tracking fast-moving asteroids and imaging faint galaxies with his 12-inch Meade LX200 telescope.

I grew up in Los Angeles, went to college in Houston, spent a year in London, and eventually settled in Boston. This means I've done most of my stargazing from urban backyards where I can see only the brightest stars and planets. I have enjoyed looking at the Moon, Sun (properly filtered, of course!), planets, and star clusters with my 8-inch telescope, but I have always been extremely frustrated trying to find galaxies and other faint fuzzies. I knew I'd see more if I could transport my scope to a darker site, but I didn't have anyplace to go where I would feel safe outside alone in the dark.

So it was with equal measures of admiration and envy that I read about the observatories that my four S&T buddies built in their suburban backyards. Oh, to have a permanently mounted, ready-to-use, large-aperture telescope under a dark sky! Would I ever know such bliss?

I didn't think so, but then one day my wife suggested we look for a small piece of land in southern New Hampshire, where we'd long enjoyed camping and hiking with our three sons. Susan wanted to put up a log cabin. You know what I wanted to put up.

Rick Fienberg's observatory and telescope can be readied for work in just a couple of minutes, thanks to an easily rolled roof and a permanent equatorial pier.

After several months of searching for the right spot, we found it near the tiny town of Danbury, which has no streetlights and no plans to install any. Susan ordered a log cabin and a crew to build it, and I ordered a Meade 12-inch LX200 telescope and a steel pier on which to mount it (cynics note: I paid retail). I sketched plans for a modest roll-off-roof observatory but could not find a local contractor with the time or inclination to build it. After talking with Dennis di Cicco about his "doghouse" observatory, I decided I might be able to do it myself, though I had hardly any experience using the essential circular saw.

Twenty weekends and countless trips to the building-supplies store later, I'd done it — and I still had all my fingers (though I did manage to whack one with a hammer while shingling the roof)! It was the most rewarding and enjoyable project I've ever undertaken. And, as you might expect, it's proving even more fun to use than it was to build. A bigger scope under a darker sky makes an enormous difference. I'm seeing all sorts of things — especially galaxies — that I've never seen through the eyepiece in three decades of observing. And I can do it whenever I want (weather permitting, of course).

The only problem is, every time I drive by a hardware store or lumberyard now, my pulse speeds up and my car slows down. I'm sure that'll pass.