Time In the Sky and the Amateur Astronomer 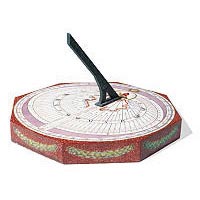 Timekeeping the old-fashioned way. The first sundial was probably just a stick in the ground; this fine porcelain dial, made in France in 1793, is no great improvement. It keeps apparent solar time, which is out of step with modern clock time on several counts.

Knowing time is simple in everyday life. You look at a clock. You assume that everyone else's clock in your time zone reads the same. And that's that. For astronomers, however, time in the sky can become quite complex. The reason is that our units of time measurement — the day and its subdivisions of hour, minute, and second — are based on astronomical phenomena that are themselves more complex than you might think.

Most of these complications have been smoothed out of our everyday civil time system by official edict. The result is a simple, easy-to-use timekeeping arrangement that serves society well — as long as nobody looks too closely at the sky. Do so, and all the carefully hidden fudge factors erupt back into view.

Types of Time in the Sky

Here, then, is a summary of the time systems that a well-informed amateur should know about.

Local Apparent Time (LAT), also called apparent solar time or sundial time, is what everyone used long ago when they told time by the Sun. Noon was what most people still think is noon: when the Sun crosses the meridian — that is, when the Sun is due south (for people at north temperate latitudes), at its highest point of the day, and halfway between sunrise and sunset. The very word "meridian" is from the Latin for "mid-day."

But when reasonably accurate clocks were invented, careful timekeepers noticed that something was wrong with solar time. The Sun sometimes runs up to 16 minutes fast in its daily travels across the sky, and sometimes as much as 14 minutes slow, depending on the season. This effect arises from the tilt of the Earth's axis and the ellipticity of the Earth's orbit around the Sun. To escape the problem, our next time system was invented:

Local Mean Time (LMT). Astronomers created an imaginary, well-behaved mean Sun that travels along the celestial equator at a uniform rate to make its annual circuit around the constellations. The mean Sun has the average or mean right ascension of the real Sun. Noon became the moment when the fictitious mean Sun crossed the meridian.

The number of minutes the real Sun lags behind or runs ahead of the mean Sun was named the equation of time. Its value for any date can be looked up in an almanac or can be read from the graphic Sky-Gazer's Almanac that comes every year with Sky & Telescope's January issue.

But this adjustment wasn't enough. An even worse problem results from the fact that the Earth is round 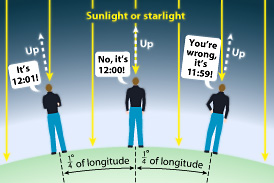 The time depends on where you stand — if you’re using Local Mean Time, the system governing star charts, planispheres, and the meridian crossings of the Sun and stars. At 40° latitude, people living just 13 miles (21 kilometers) east or west of each other had clocks differing by 1 minute until standard time zones were imposed.

At 40° latitude (either north or south), the difference amounts to one minute of time for every 13 miles (21 kilometers) east or west. To a person watching the sky 13 miles west of you, the time seems to be 11:59 when you swear it's 12:00 and someone 13 miles east insists it's 12:01. This is why Local Mean Time is local. It depends on your location.

This didn't matter when travel and communication were slow. The problem grew more acute in the 19th century. The widespread use of telegraphs and railroads finally forced a change. How could you catch a train when every town and every railroad company kept a slightly different time?

In 1883 the United States was divided into standard time zones; the rest of the world soon followed. In each zone, all clocks are set to the Local Mean Time of a standard longitude: 75° west for Eastern Standard Time, 90° for Central, 105° for Mountain, and 120° for Pacific. Each time zone differs from its neighbors by one hour because these longitudes are 15° apart — 1/24 of the way around the Earth.

Standard time was a great advance for society. But not for skywatchers. Planispheres (star wheels) still work in Local Mean Time (LMT). So does every all-sky map that shows horizons, such as the evening constellation map in Sky & Telescope every month. So does the Sky-Gazer's Almanac that accompanies our January issues, the "Local Time of Transit" scale on our Sun, Moon, and Planets This Month chart, and every other map, device, or calculation that shows astronomical objects with respect to your horizon, zenith, or meridian without taking your local longitude explicitly into account.

Luckily, correcting for LMT is simple. For every 1° you are west of your time zone's standard longitude, add 4 minutes to LMT to get standard time. For each 1° you are east, subtract 4 minutes.

To make sure you don't do it backward, use this formula: Standard time = LMT + Correction, where the correction is positive west of your time zone meridian, negative east of it. Find and learn your correction; you'll use it forever.

Universal Time (UT). Standard time (and its daylight-saving variant) serves fine within a given time zone. But when a time applies worldwide, such as in an astronomical almanac, which time zone should be favored?

Logically enough, the "universal" time zone that was agreed upon (in 1884) is that of 0° longitude. This longitude was originally defined as that of a line engraved in a brass plate in the floor under a transit-timing telescope at the Old Royal Observatory in Greenwich, England. Hence UT is often called Greenwich Mean Time (GMT).

To convert a Universal Time and date to a standard time and date in North America, subtract the following number of hours:

to get Eastern Standard Time (EST), 5;

to get Central Standard Time (CST), 6;

to get Mountain Standard Time (MST), 7;

to get Pacific Standard Time (PST), 8;

Of course the date must be given in the same system as the time!! If you get a negative number of hours, add 24; in this case the result is on the date before the UT date given. For example, 6:45 UT January 9th is 1:45 a.m. on the 9th EST, and 10:45 p.m. on the 8th PST. Other time zones worldwide have their relations to UT listed in many places. (Here is one such site.)

To obtain daylight saving time ("summer time"), subtract one hour less than the values above.

Ephemeris Time; Dynamical Time; Terrestrial Time. Once the worldwide system of time zones was in place, with UT proudly heading up the list, all should have been well forever after. But such was not to be. Astronomers working with solar-system dynamics noticed something very disturbing. The day itself varies in length.

The Earth's rotation slows down and speeds up by small amounts unpredictably, while undergoing a slight but very long-term slowing trend. The gradual slowing is caused by the friction of tides raised by the Moon and Sun. Slow, irregular changes are thought to involve motions of material in the Earth's fluid interior. Changes in winds, air masses, snow packs, and other factors cause shorter-term variations.

Faced with this problem, astronomers in 1952 instituted Ephemeris Time (ET) — which in 1984 was replaced with the very similar Terrestrial Dynamical Time (TDT), which in 1991 was renamed Terrestrial Time (TT). This time system runs perfectly steadily regardless of the Earth's rotation, almost as if the Earth didn't exist. It is used for most celestial calculations and almanac (ephemeris) predictions, especially those having to do with the motions of the Moon, planets, and other solar system bodies in space. TT matched UT around 1902. Since then UT has gradually drifted away from it, so that as of 2009, UT lags behind by about 66 seconds.

If you encounter a time given in TT or "Dynamical Time," and if one-minute accuracy matters, you need to know the difference from UT. Almanacs list this difference, which is known as Delta T. Use the formula UT = TT - Delta T. It is impossible to forecast Delta T precisely because the Earth's fitful rotation rate is too unpredictable.

More subtle problems kept cropping up. To deal with slight time-distorting effects due to Einstein's general theory of relativity, Barycentric Dynamical Time (TDB) was introduced in 1976. In 1991 this was largely replaced by Geocentric Coordinate Time (TCG) and Barycentric Coordinate Time (TCB); the latter is referred to the solar system's center of mass instead of Earth. These are used in spaceflight; amateurs can generally ignore them.

Coordinated Universal Time (UTC). Civilization at large, not just astronomers, needs a smoothly running time system like Terrestrial Time. But most of humanity is also tied to the natural cycle of the day, variable though it may be. What to do?

Part of the solution has been to redefine the basic time unit, the second. No longer is a second exactly 1/86,400 of a mean solar day. Since 1967 the second has been defined as how long cesium-133 atoms take to emit 9,192,631,770 cycles of a certain microwave radiation in an atomic clock.

With the second no longer defined astronomically, the Earth can spin as it pleases without upsetting the world's clocks. But there is a price to pay. A day no longer has 24 hours. There are now about 24.0000003 hours in an average day.

To keep our clocks in close step with the turning of the Earth, a leap second is inserted into Universal Time when required — about once a year on average. A leap second may be added at the end of June 30th or December 31st UT, giving the last minute of the chosen day 61 seconds.

The result is Coordinated Universal Time or UTC, the system by which all the world's clocks are set. UTC is the basis for all time-signal radio broadcasts and other time services. In non-astronomical circles it is sometimes called World time, Z time, Zulu, or informally, Greenwich Mean Time (GMT).

But the occasional leap-second jerks in UTC go unfelt, of course, by the Earth, planets, and stars. Almanac predictions given in "UT" are actually in a system known as UT1, which is always within 0.9 second of UTC. Therefore, when specifying "UT" to better than one-second accuracy, you should state whether you mean UTC or UT1 unless this is obvious from the context — such as if the time came from a radio time-station signal.

Sidereal time.This is simply the right ascension of stars on your local meridian at any moment. Sidereal time runs about 4 minutes a day faster than all the time systems described above. An old trick is to adjust a clock to run 4 minutes a day fast, set it to local sidereal time, and use it to tell what constellations are on the meridian and what star charts to use. For instance, if the clock reads 5:30 a.m., right ascension 5h 30m is on your meridian, and there you'll find Orion.

Want to learn more about time in the sky? For the next level of depth about time systems, see Roy Bishop's excellent article that's reprinted each year in the Observer's Handbook of the Royal Astronomical Society of Canada.