What Are Celestial Coordinates?

Newcomers to astronomy can get thrown for a loop when they first encounter declination and right ascension, the terms astronomers use to define coordinates in the sky. Why are the positions of stars that are light-years away in the depths of space stated in a system that's tied to latitude and longitude here on Earth? What are celestial coordinates and do I need to know them for everyday sky gazing? 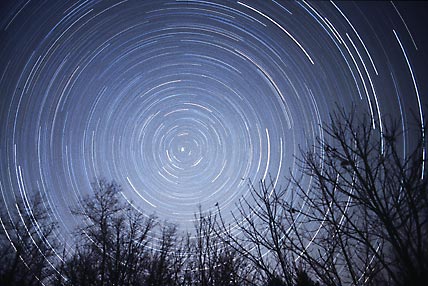 What Are Celestial Coordinates?

The celestial coordinate system, which serves modern astronomy so well, is firmly grounded in the faulty world-view of the ancients. They believed the Earth was motionless and at the center of creation. The sky, they thought, was exactly what it looks like: a hollow hemisphere arching over the Earth like a great dome. The stars? "They're fireflies," explains Timón in The Lion King, "stuck to that big, uh, blue-black thing up there." 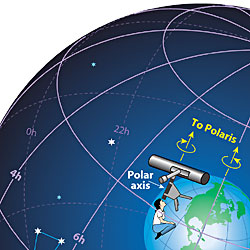 The Earth is at the center of the celestial sphere, an imaginary surface on which the planets, stars, and nebulae seem to be printed. On the celestial sphere, lines of right ascension and declination are similar to longitude and latitude lines on Earth. When a telescope's right-ascension axis is lined up with the Earth's axis, as shown here, the telescope can turn on it to follow the rotating sky.

Even today this is how the cosmic setup actually looks. Never mind that we're on a moving dust mote orbiting a star in the fringe of a galaxy. In astronomy, appearances and reality are more different than in any other area of human experience. Perhaps for this reason, astronomers are quite comfortable living with both — as long as the two are kept in their proper relationship. The celestial sphere, with its infinitely large radius, appears to turn daily around our motionless Earth, from which we use telescopes to examine wonders painted on its inside surface.

From Earth to Sky

Whenever you want to specify a point on the surface of a sphere, you'll probably use what geometers call spherical coordinates. In the case of Earth, these are named latitude and longitude.

Imagine the lines of latitude and longitude ballooning outward from the Earth and printing themselves on the inside of the sky sphere, as shown at right. They are now called, respectively, declination and right ascension.

At any other latitude — let's say Kansas City at 39° N — the corresponding declination line crosses your zenith: in this case declination +39°. (By custom, declinations north and south of the equator are called + and – rather than N and S.) This is the declination of the bright star Vega. So once a day, Vega passes overhead as seen from the latitude of Kansas City.

Lines of both right ascension and declination stay fixed with respect to the stars. That's why they can be permanently printed on star maps. (This does mean that the one-to-one connection between right ascension and longitude is broken the moment after you imagine the lines ballooning out from Earth and printing themselves on the sky; the two systems rotate with respect to each other.)

Of course Vega doesn't move; it's the Earth that's turning. But we're talking appearances here. The celestial sphere seems to rotate around our motionless world once in about 24 hours.

Closeup of an equatorial mount. To set it up, you aim one axis (the polar axis) about at Polaris, the North Star. This lets the telescope track objects anywhere in the sky by turning around just this one axis. Click to zoom in on the setting circles for right ascension (left) and declination (center), and the latitude setting, which adjusts the tilt of the polar axis to match your latitude (right).

This daily motion is the basis of the numbering system used in right ascension. Instead of counting in degrees, as with longitude around the Earth, right ascension is usually counted in hours, from 0 to 24 around the sky. This is just a different way of putting dividing marks on a circle. One hour in this scheme is 1/24 of a circle, or 15°.

The benefit of this numbering system is that as the Earth rotates, you see the sky turn by about 1 hour of right ascension for each hour of time. This makes it easy to figure out when celestial objects will come in and out of view. The sky becomes a giant 24-hour clock.

Since ancient Babylonia, people have divided both degrees and hours into finer units by means of base-60 arithmetic. In 1° there are 60 arcminutes, written 60'. One arcminute contains 60 arcseconds, written 60". A good telescope in good sky conditions can resolve details about as fine as 1" on the surface of the celestial sphere. By comparison, 1" of latitude on Earth is about 101 feet. So if you had a telescope at the center of a transparent Earth, you could resolve details about as big as a house lot up on the surface.

Celestial coordinates up close and personal. Left: The constellation Orion as depicted on David Chandler's The Night Sky planisphere. Note the scales for right ascension (5h, 6h, etc.) and declination (–10°, –20°, etc.). Right: Orion's Belt (in red box at left) plotted in much more detail on Chart 254 of the Millennium Star Atlas. Each fine horizontal line marks 1° of declination, and each vertical line marks 4 minutes of R.A. North is up and east is left on both maps.

Because declination is given in degrees, fine gradations of it are usually expressed in the Babylonian system of arcminutes and arcseconds. For instance, Vega's exact declination (2000.0 coordinates) is +38° 47' 01".

The Earth (blue dot at center) has a spin axis and equator tilted with respect to the plane of its orbit around the Sun. As a result, the celestial-coordinate system (yellow and blue) is tilted with respect to the ecliptic (the apparent path that the Sun follows over the course of a year from Earth's viewpoint). The R.A. scale's zero point is defined to be at the First Point of Aries, one of two points where the ecliptic and celestial equator cross.

Any spherical coordinate system comes with a natural, built-in zero value for its "latitude" coordinate, whether this is called latitude, declination, or something else. This zero marker is the equator. No other latitude line is like it.

On Earth, 0° longitude has long been defined as a line engraved on a brass plate set in the floor under a position-measuring telescope at the Old Royal Observatory in Greenwich, England. In the sky, 0h ("zero hours") right ascension is defined as where the plane of the Earth's orbit around the Sun (the ecliptic) crosses the celestial equator in Pisces. This point is called, for historical reasons, the First Point of Aries.

The First Point of Aries really was in Aries when it was named roughly 2,000 years ago. It has crept into the stars of Pisces because of precession, a slow shift in the orientation of the Earth's axis with respect to the rest of the universe.

You've probably seen an example of precession firsthand, even if you didn't realize it. Put a spinning top at an angle on a table and it will precess — its spin axis will slowly circle around the upward direction of the force that the table applies to the point of the top. In exactly the same manner, the spinning Earth slowly precesses because of the force that the tidal gravitational tugs of the Moon and Sun apply to the Earth's slight equatorial bulge.

In this 2.4MB QuickTime animation, the spinning Earth is surrounded by a static R.A./Dec. grid — until thousands of years are allowed to elapse, that is! The Earth's precession — the slow wobble of its rotation axis — gradually changes the R.A. and Dec. of every celestial object.

Because of precession, we see the north celestial pole, which is currently located close to Polaris, swing across the stars in a wide loop around the north ecliptic pole every 26,000 years. The south celestial pole similarly loops around in the far-southern sky. The moving celestial poles drag the whole celestial-coordinate system — the whole grid of declination and right ascension — along with them.

Contrary to popular belief, precession does not shift the Earth's axis with respect to the Earth's own geography. The terrestrial North Pole doesn't move to a new location (at least not much on the time scales we're talking about). Precession won't give walruses a tropical suntan. The only noticeable changes are those that result from the grid of celestial coordinates moving against the stars. In 10,000 years, for instance, Vega will be the north star, and Orion will be a constellation of summer, not winter (for Northern Hemisphere residents).

For moving objects such as the Sun, Moon, and planets, right ascension and declination are often given for the "equinox of date": the R.A. and Dec. values that are correct for the actual date listed. In Sky & Telescope's monthly table of Sun and planet positions, the positions are given in the coordinate system for each date listed.

Rarely, however, do backyard astronomers need to worry about precession. From 1950 to 2000 the coordinate grid crept along the ecliptic by only 0.7°, less than the width of the lowest-power view in many telescopes. And that amount applies only at the ecliptic itself. The total shift is less elsewhere, declining to essentially zero at the ecliptic poles. 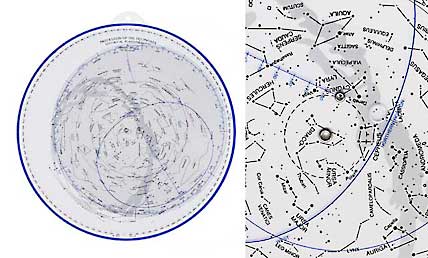 Left: A neat teaching tool, Milton D. Heifetz's Precession of the Equinoxes Planisphere not only shows which stars are above the horizon on a given date and at a given time of night — it does so for any era in the Earth's 26,000-year-long precessional wobble. Right: Third-magnitude Delta Cygni will be the north star for a few centuries around AD 11,250. (This is the Northern Hemisphere edition; Heifetz also makes a Southern Hemisphere version.)

Which way does precession go? In most of the sky, it makes a star's right ascension increase each year. That is, an old right-ascension value precedes (is less than) the newer value in amount as well as in date.

As for right ascension itself, just remember that it increases to the east. If you get confused about which way is east on a star map that shows right ascension, this little mnemonic will get you squared away.