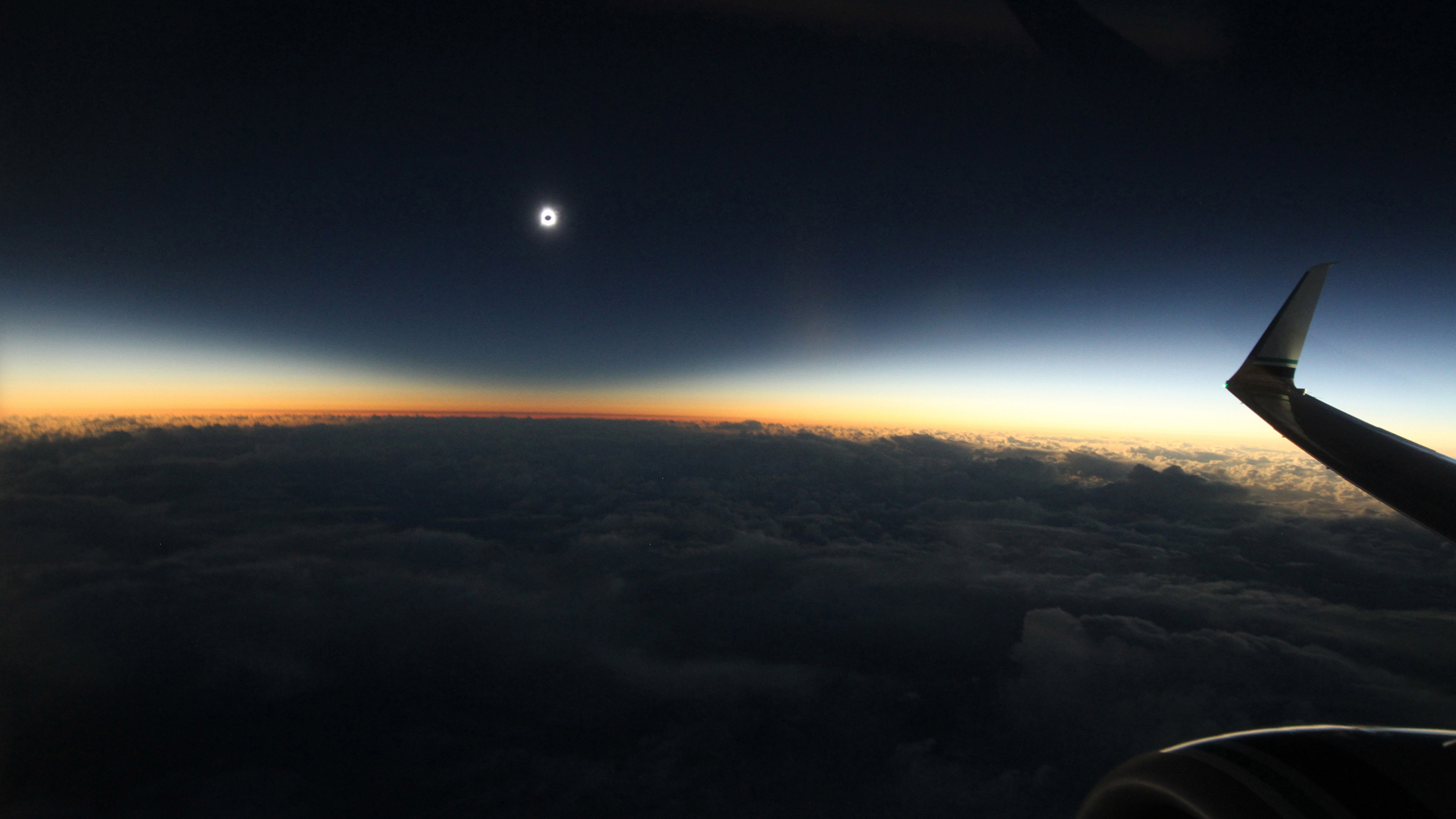 Scores of lucky passengers got to view the totally eclipsed Sun on march 8, 2016, aboard Alaska Airlines flight 870, which intercepted the Moon's shadow over the Pacific Ocean

Here are the facts and figures regarding the chartered A320 aircraft that will intercept the Moon's shadow on July 2, 2019.

An airborne intercept of the Moon's umbral shadow on July 2, 2019, is made possible because the altitude of the Sun during totality will be 14° to 20° for the locations that can be most easily reached off the coast of central Chile. This means that totality can be viewed comfortably through the plane's windows without resorting to gymnast-like contortions.

For the past 9 months, the editors of Sky & Telescope have  collaborated with Dr. Glenn Schneider, the unrivaled master of midair eclipse intercepts, to fine-tune the range of possible eclipse flight paths.

Meanwhile, we have negotiated with Latam Airlines to provide a chartered flight into the eclipse path above the South Pacific Ocean off the coast of Chile. We have settled on using an Airbus 320-200 aircraft, the workhorse of Latam's Chilean fleet.

Latam usually configures its A320 aircraft with an economy-only cabin of 29 rows with six-across seating, as shown in the image at right. The spacing (pitch) of the rows is 29 to 30 inches, which despite being relatively tight by airline standards will still offer enough room for one or two people to have easy access to the window area. (The two exit rows, over the wing, offer a generous 38 inches of spacing.)

Consequently we are limiting the flight's capacity to no more than two people per row. In essence, your reservation will entitle you to all six seats in your assigned row — even though the eclipse will only be visible from the windows on the left (port) side of the aircraft.

Note: This plane will have no in-seat entertainment system, no power outlets, and no WiFi.

An A320-200 has 40 windows on each side of the fuselage, so consequently some rows will have access to two windows and some to just one. Moreover, some windows align so closely with the adjacent seat backs (which recline only slightly, if at all) that they won't be usable for eclipse viewing. The schematic below shows how the windows (colored light blue) and rows line up.

In most cases, there won't be enough floor space to set up a full-size camera tripod. Instead, consider attaching your camera to a compact tripod resting on the seat, a hand-held monopod, or a suction-cup mount (attached to the window) for your camera. Of course, you might prefer to simply enjoy the total eclipse visually, either with your unaided eyes or with binoculars.

Modern aircraft have a near-vertical winglet at the outer tip of each wing. However, Latam's winglets are relatively small (see the picture at the top of this page) and will not interfere at all with our views of the totally eclipsed Sun. Those of you with rows over the wings, including the exit rows, will not get a full view of the ground and ocean below the plane. But you'll still clearly see the Moon's shadow darkening the sky as it approaches the plane just before totality and recedes in the moments afterward. The graphics below show profiles of the plane's exterior.

Our proposed, 2½-hour flight plan calls for departure from Santiago's Comodoro Arturo Merino Benítez International Airport at about 3:20 p.m. (local time) on eclipse day. We'll fly to an intercept track over the Pacific Ocean to the west of La Serena. This will allow us to view the final stages of the partial eclipse prior to 2nd Contact (when the total eclipse begins), all of totality, and the partial phases immediately after 3rd Contact (when the total eclipse ends).

The exact routing and intercept location will be determined by our departure time. The sooner we depart, the farther west we can position ourselves along the eclipse path. Depending on our exact departure time, winds aloft, and other factors, we'll experience totality lasting 2m 56s to 3m 16s — slightly longer if winds are favorable.

After our departure from Santiago, we will fly northward from Santiago for roughly 45 minutes, Then, as the graphic below shows, our plane will assume a heading toward the northeast (the yellow "totality run" line), and we will maintain that direction for the 15-minute-long interval centered on mid-eclipse. This will position the Sun straight out of the windows on the left side of the fuselage, perpendicular to our direction of flight.

In this region during July 2nd's eclipse, the Moon's umbra is nearing the end of its passage across Earth and becomes very elongated (shown above as overlapping gray ellipses) as it nears our planet's sunset terminator. It will be racing along with a ground speed of more than 2 km/s (4,500 mph). This vastly exceeds our plane's velocity of ~470 knots (~540 mph). In essence, we'll position the plane to be overrun by the hypersonic umbral shadow. The plane's motion across its path will increase our duration of totality (red bars on the map) only incrementally — the real advantage in extending totality's duration comes from being farther west along the eclipse track.

Barring any unexpected problems, we'll have a departure "cushion" in Santiago of about 40 minutes. The rightmost oval in the plot above represents the intercept path we'll take if the flight is delayed by that much. Fortunately, Latam will have a backup aircraft standing by in Santiago in case of a major malfunction in our primary aircraft.

Just to recap what is and isn't included in this airborne eclipse trip:

Our package includes:
• preflight briefing at the Holiday Inn Santiago Airport
• reserved row assignment for eclipse viewing
• generous carry-on allowance for your viewing and/or camera gear
• lunch before the flight, beverages while airborne, and dinner after the flight

Finally, we know that you desire to witness the 2019 total solar eclipse, and we will do our very best to achieve that goal. However, we cannot guarantee that there will be no cloud cover, that the plane will be in the planned position, or that there will not be another reason beyond our control that prevents viewing totality.

But Glenn Schneider has successfully guided more than a dozen aircraft into the Moon's shadow over the years, and Sky & Telescope's editors themselves have three successful eclipse flights to their credit going back to 2003 (a flight over Antarctica that used a Latam A340 jumbo jet). We have every confidence in our team, and we look forward to letting you gasp in awe at the Sun's dazzling corona on July 2, 2019.

If you have any questions concerning the aircraft or flight logistics, please contact Kelly Beatty at jkellybeatty@gmail.com.