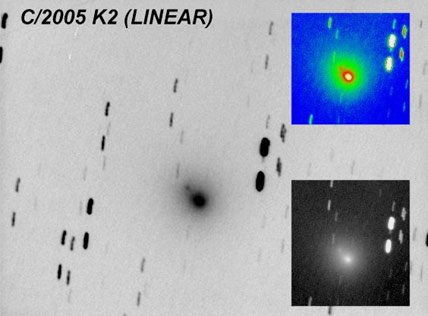 Observing from his Worth Hill Observatory in Dorset, U.K., David Strange captured this negative image of Comet LINEAR, C/2005 K2, on June 13th at 23:23 Universal Time. It’s a stack of twenty 20-second exposures taken with a 20-inch f/4 Newtonian reflector and a Starlight Xpress MX916 CCD camera. Note the comet's secondary nucleus near the 10 o'clock position, also evident in the false-color and positive-image insets.

The brightest comet in the sky right now isn't Tempel 1 or the fading Machholz. It's one you’ve probably never heard of: Comet LINEAR, C/2005 K2, glowing at about magnitude 9.2 as of June 17th. It's visible with a medium-sized telescope in the northwestern sky at the end of evening twilight — but only for a few more days.

This minor comet recently brightened radically after going through a dramatic change. Observers in Europe and the U.S. have obtained CCD images that show what looks like its nucleus shedding a big fragment. LINEAR's secondary nucleus appeared as a small, 17th-magnitude fuzzy blob northeast of the primary, slowly drifting away in the direction of the comet's short tail.

This breakup may have been the cause of C/2005 K2's ongoing outburst in brightness; the comet brightened from magnitude 12 to 9 in the first half of June. Typically, when a comet fragments, fresh icy material in the nucleus's interior gets exposed to solar radiation, causing a dramatic increase in the gas and dust output. 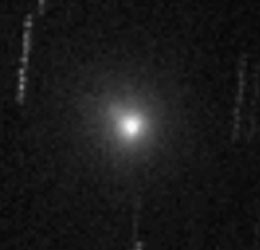 Mike Holloway of Van Buren, Arkansas, captured the two images above on June 12th at 3:27 UT and June 15th at 2:56 UT. They show the fragment separating from the comet’s main condensation during the 72-hour period. Holloway used a 4-inch f/5.3 Takahashi refractor and an SBIG ST-2000XM CCD camera.

Comet discoverer and Sky & Telescope contributing editor David H. Levy was comet hunting on the night of June 12th when he happened to sweep up the (already-discovered) C/2005 K2 with a 10-inch telescope. "At 40 power, the object looked decidedly noncometary," noted Levy. "It was unusually elongated; it appeared more like an amorphous, low-surface-brightness galaxy than a comet, and that's what had me fooled initially." 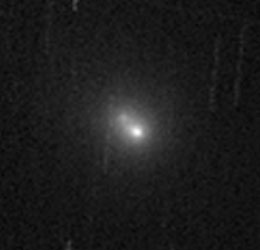 Mike Holloway of Van Buren, Arkansas, captured the two images above on June 12th at 3:27 UT and June 15th at 2:56 UT. They show the fragment separating from the comet’s main condensation during the 72-hour period. Holloway used a 4-inch f/5.3 Takahashi refractor and an SBIG ST-2000XM CCD camera.

C/2005 K2 is named after the LINEAR (Lincoln Near Earth Asteroid Research) automated sky-survey program operating in Socorro, New Mexico, which discovered it on May 19th. It was then only 19th magnitude. C/2005 K2 will reach perihelion on July 5th at about 0.54 astronomical unit (82 million kilometers) from the Sun. This is the LINEAR project’s 158th comet find.

Right now is the best time to try to spot the comet with a telescope, before it gets too low in twilight. As of June 15th it's in Lynx about 30° above the northwestern horizon after dusk for observers at 40° north latitude. It's rapidly heading south and dropping lower daily; it will be in poor view by the 22nd. Use the ephemeris below to plot the comet's position on a detailed star chart such as Sky Atlas 2000.0 or Uranometria 2000.0 If you have sky-map software on your computer, you can get orbital elements (or coordinates) from the Minor Planet Center and plot the comet's course yourself.

Comets break up fairly often due to structural weaknesses in their nuclei. Solar heating, for instance, can cause pockets of volatile ices to sublimate rapidly, inducing stresses in the nucleus. Some famous examples include Comet West, which split into four pieces after perihelion in 1976, and Comet Shoemaker-Levy 9, which broke apart due to tidal forces during a close approach to Jupiter prior to its discovery in 1993. That comet's 21 sizable fragments returned to Jupiter and crashed into the planet the following year.

Here are the right ascension and declination of C/2005 K2 at 0:00 Universal Time (which falls on the evening of the previous date in North America):