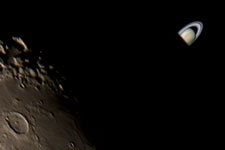 Observing from Cambrai in northern France, Étienne Bonduelle watched as Saturn reappeared from behind the waning gibbous Moon on November 3, 2001. He made this composite image using a Meade 8-inch LX90 Schmidt-Cassegrain telescope and a webcam.

By May the ringed planet Saturn will have ducked behind the Moon 14 times over the course of a year (nine in late 2001 and five in early 2002). Yet few of these occultations were or will be especially favorable for North Americans. For example, one of the most recent Saturn-Moon matchups (November 2001) was swamped by a full Moon and another played out in predawn darkness. This year's are no better, occurring mainly in broad daylight or when the twosome is not above the Western Hemisphere's horizons.

In fact, only the Saturn occultation taking place this month — on the evening of February 20th — qualifies as a "prime-time event." The Moon is a bit past first quarter, 55 percent illuminated, when it overtakes the ringed planet. By then the two will have already set in Europe on the morning of the 21st, except for portions of Portugal, Spain, and northwest Africa. But for the eastern United States and the northern Caribbean, Saturn disappears behind the Moon's dark limb when well up in the south after sunset. It reappears on the bright limb roughly 60 to 75 minutes later.

Although February's occultation favors the East Coast, observers in bright twilight should be able to see Saturn telescopically near the time of its disappearance. The purple curves give the Universal Times of Saturn's disappearance and the red curves its reappearance. Click on the image for a larger view.

As noted in the map on the right, this event favors East Coast observers. The northern limit tracks well north of the U.S.-Canada border in the east and arcs down between Salt Lake City and San Francisco in the west, while the southern limit crosses Honduras and the northern Caribbean Sea. Longitude also plays a crucial role in your observing strategy: the occultation begins in twilight for Midwest observers, while skywatchers in the Rockies, Far West, and Mexico must watch in daylight. Fortunately, even though it's more than two months past opposition, Saturn is still magnitude 0.0. So observers stuck in daylight or bright twilight should have little trouble picking up the planet telescopically near the time of its disappearance. (A chart detailing disappearance and reappearance times for 30 U.S. and Canadian cities is included in the February issue of Sky & Telescope. A much more extensive list is available here.)

The Appearance of Saturn

The resplendent ring system, still tipped wide open, spans 42.2", with Saturn itself 18.6" across. This means that the Moon's limb takes roughly two minutes to swallow Saturn from ring tip to ring tip. The event's leisurely pace and fortuitous geometry provide a rare opportunity to observe or record the planet's faint C and F rings (Sky & Telescope: February 2002, page 103). Titan, the largest Saturnian satellite, is 3' farther east and trails the planet's disappearance by some 6 to 8 minutes, depending on location. Because of its size, Titan should make a gradual, 2-second-long entry behind the lunar limb.

Skywatchers in many North American cities are poised to see the Moon occult Saturn on February 20th, when the planet takes various paths behind the lunar disk. Celestial north is up.

Lunar occultations of bright planets are satisfying visual treats no matter what equipment you possess. February's event occurs with the Moon and Saturn nestled between the Hyades and Pleiades open star clusters, providing an attractive setting for naked-eye or binocular viewing. Try gauging Saturn's diminishing brightness compared to 3.5-magnitude Epsilon (e) Tauri just south of the Moon and 0.8-magnitude Aldebaran a few degrees away. 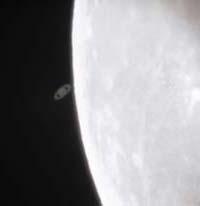 On November 3, 2001, European observers saw Saturn slip behind the bright lunar limb as this David Smith image shows. Glare will be a problem for North Americans trying to glimpse the planet's emergence from behind the Moon on February 20th.

As noted by David Dunham in the January issue of Sky & Telescope (page 110), many occultations of bright planets occur in 2002 (5 of Saturn, 3 of Jupiter, 3 of Mars, and 1 of Venus). One reason is that the ascending node of the Moon's orbit has migrated to a point on the ecliptic near the positions of both Jupiter and Saturn. But this year's subsequent cover-ups of magnificent Saturn will be invisible or unfavorable for North Americans.

The next series of Saturn occultations does not begin until late in 2006, so take in February 20th's event if you have the good fortune of clear skies that evening.