How Yuji Hyakutake Found His Comet 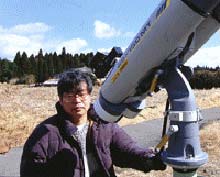 Yuji Hyakutake of Kagoshima, Japan, brings his Fujinon 25x150 binoculars for comet-hunting sessions at a dark-sky site 15 kilometers from his home. A photography major from Kyushu Industry University, Hyakutake lives with his wife and two sons in the village of Hayato. Photograph by Akira Otawara.

For Yuji Hyakutake, the 45-year-old Japanese amateur who found the Great Comet of 1996, the discovery was a dream come true. But his sudden worldwide fame was a little overwhelming. He found himself unable to comet-hunt because the spotlights of television crews followed him to his observing site. Fame, however, has had its rewards. Hyakutake was flown to the United
States in March (1996) as a special guest of Chicago's Adler Planetarium, where he received hearty congratulations. "This comet is a lucky comet for me," he told the crowd through an interpreter.

Hyakutake (the name means "a hundred samurai") lives with his family in the village of Hayato, in Kyushu's Kagoshima Prefecture some 950 kilometers southwest of Tokyo. "I've been interested in comets since I was 15 years old, after I heard of the Japanese Comet Ikeya-Seki, which appeared in 1965," he says. "My interest in astronomy has increased steadily since
then."

Hyakutake started searching for comets in 1989, but he began serious searching only after he quit his job as a newspaper photoengraver in 1994 and moved to Kagoshima, where the skies are darker and clearer. "Since last July I have been avidly searching the night sky for comets from 2 a.m. to 5 a.m. about four nights a month." For his comet hunting Hyakutake brings his giant, pedestal-mounted 25x150 Fujinon binoculars to a rural mountaintop area about 15 km from his home to get a better view low to the east. His dedication paid off on Christmas Day of 1995, when he discovered his first comet, C/1995 Y1 (Sky & Telescope: March 1996, page 72). Five weeks later he found his famous one, C/1996 B2 (S&T: April 1996, page 10). 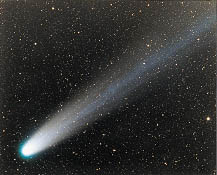 In an interview that appeared in Gekkan Tenmon (Monthly Astronomy) in April, 1996, Hyakutake related the story of his monumental find. "I searched only four hours in two nights in January, because we had a long spell of disagreeable weather since my discovery of C/1995 Y1 a month before. On January 30, as it was likely to clear up at dawn, I left home for my observation place. I wanted to reach the site by 3:30 a.m., when the Moon would set in the west. The sky was in a nice condition when I left home, but at the observing site I found low clouds flowing from the west.

"It was about 20 minutes later when I unexpectedly came across a cometlike object. Judging from constellations glimpsed between passing clouds, it seemed to be situated southeast of Corvus.... I was very familiar with the star field of this area because I had often observed C/1995 Y1 there.... I said to myself, `I must be dreaming.'

"I left my binoculars for a while to calm myself down, and then I started drawing the cometlike object relative to the background stars. It was much more condensed than C/1995 Y

"It was 4:50 a.m. when I looked at my watch after marking its position. I had to confirm whether it was moving or not. At 5:40 a.m. morning twilight began. I again went back to the binoculars. I couldn't confirm the motion.... I concluded that the `possible comet' should be coming directly toward the Earth.

"I came back home and checked for comets that had already been discovered, but I couldn't find reports referring to the cometlike object in question. So I began to draw up a report." Hyakutake sent the notice to Tokyo's National Astronomical Observatory and to cometary orbit expert Syuichi Nakano. At around 3 a.m. the next morning Nakano faxed him that the comet
was real.

"My discovery wasn't reported very widely by the Japanese media until recently," Hyakutake said in Chicago. "My wife can't make phone calls because the phone is always ringing. I'm a bit perplexed by all the attention paid to me, when it is the comet that deserves the credit." 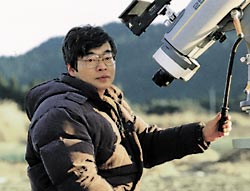 The new comet soon delighted skywatchers as it put on the best display since Comet West in 1976. "I'm a bit perplexed by all the attention paid to me, when it is the comet that deserves the credit," Hyakutake later said of his instant fame.