Tan Wei Leong of Singapore obtained this superb CCD image of Mars using an 11-inch telescope. Edom Promontorium, where numerous bright flares were seen in early June 2001, is near the central meridian in its normal non-flare state. South is up.

Will Martian flares like those observed in 2001 appear again in 2003? It appears so! Two transient brightenings have already been reported (see below), and amateur and professional astronomers will be watching the red planet closely for more.

In the May 2001 issue of Sky & Telescope, my colleague William Sheehan and I discussed rare historical observations of bright, star-like flares from certain regions on the planet Mars. We suggested that the brightenings might be caused by specular (mirror-like) reflections of sunlight off water-ice crystals in surface frosts or thin clouds. Many of these glints were reported when the sub-Sun and sub-Earth points (where the Sun and Earth, respectively, are directly overhead as seen from Mars) were nearly coincident and close to the planet's central meridian, the imaginary line running down the center of the visible disk from pole to pole. Based on our analysis, we predicted that flares like those reported only four times between 1894 and 1958 might erupt in the region known as Edom Promontorium, near the Martian equator at longitude 345°, in early June 2001.

I organized an expedition to the Florida Keys, where the red planet would climb high in the south under exceptionally steady skies. Team members from Sky & Telescope and the Association of Lunar and Planetary Observers (ALPO) scrutinized the planet using a variety of telescopes nightly beginning June 5th. No flares were seen for the first two nights. But on June 7th, beginning around 06:35 Universal Time (2:35 a.m. Eastern Daylight Time), about 85 minutes before Edom crossed the central meridian, we saw a series of brightenings. Each lasted 3 to 5 seconds; they occurred once or twice a minute over the next hour and a half, until clouds ended the observations. The flares were seen visually at magnifications of 300x to 366x through two 6-inch (15-centimeter) Newtonian reflectors and were recorded on videotape at 1,400x through a Meade 12-inch (30-cm) Schmidt-Cassegrain telescope. Visually, the flares seemed to cut the dark linear feature Sinus Sabaeus nearly in two. More brightenings of Edom were observed on June 8th; these were as brilliant as the ones the night before but not as frequent. For details see IAU Circular 7642.

One of several flares seen on June 7, 2001, peaks in brightness (left) and fades considerably less than a minute later (right). Both images are identically processed 9-frame composites from an SVHS video recording made through a 12-inch telescope. South is up.

Our June 2001 observations support the idea that the flares came from sunlight glinting off patches of frost or ice on the Martian surface. Because the flashes occurred before Edom crossed the center of the planet's disk, the reflectors must have been tilted as much as 19° east-west; perhaps they rested on inclined surfaces on the ground, for example, the slopes of dunes. Intriguingly, the light-colored oval of Edom Promontorium corresponds to the large, flat crater Schiaparelli, and in May 2002 NASA's Mars Odyssey spacecraft found indications that this region is anomalously rich in water ice for a site near the Martian equator. The historical tendency of flares to occur when the sub-Sun and sub-Earth points are nearly coincident suggests to Masatsugu Minami, director of the Oriental Astronomy Association's Mars section, that the sources of the reflections lie at the bottoms of narrow fissures or trenches on the planet's surface.

Mars observers and planetary scientists hope to learn more about the flare phenomenon during the red planet's 2003 apparition, now building toward a record-breaking closest approach in late August. Because Mars's southern hemisphere is tipped our way this year, the geometry precludes seeing any flares from Edom or other equatorial regions. Instead, specular reflections are likely from sites at more southerly Martian latitudes.

In late July and early August this year, the sub-Sun and sub-Earth points will converge at a Martian latitude of –20°. By then the apparent diameter of Mars's gibbous disk will exceed 20 arcseconds. From July 24th through August 10th, observers should keep an eye on northern Thaumasia, northern Solis Lacus, southern Tithonius Lacus, Deucalonius Regio, Iapygia, and northern Hellas — all at or near latitude –20°. It will be interesting to see if specular reflections like those observed at Edom in 2001 are rare events that suggest something special about that site, or if they can be seen at many locations whenever the Mars-Sun-Earth geometry is favorable.

A preliminary indication that Edom isn't unique came on July 22nd, when Paul Atkinson of Ft. Myers, Florida, reported sighting a flare near Solis Lacus. He was observing the red planet with a Celestron 14-inch Schmidt-Cassegrain telescope at a magnification of 411x in extremely calm, steady air. Atkinson reports: "At 9:50 UT I was making out very good detail from Aurorae Sinus through Solis Lacus and into Mare Sirenum. At approximately 9:53 UT I noticed a quick, bright flash just to the northeast of Solis Lacus in the direction of Mare Sirenum. It was followed by a second, dimmer glint approximately 5 seconds later. The first flash I would estimate to have lasted approximately 1 second. This immediately drew my eye to this region and allowed me to see the follow-up glint that was less than 1 second in duration."

Atkinson saw no further brightenings, either that morning or the next one when he observed the same region again. Based on his description, the glint occurred near Phasis at about 110 degrees west Martian longitude and 19 degrees south latitude. Taking into account the Sun-Mars-Earth geometry, the reflector must have been inclined on an east-west axis in a fashion eerily similar to the 2001 flares at Edom.

Additional observations, both positive and negative, are welcomed by the Mars sections of both ALPO and the British Astronomical Association, as well as by the International Mars Watch. Of course, we also welcome your observing reports at Sky & Telescope! 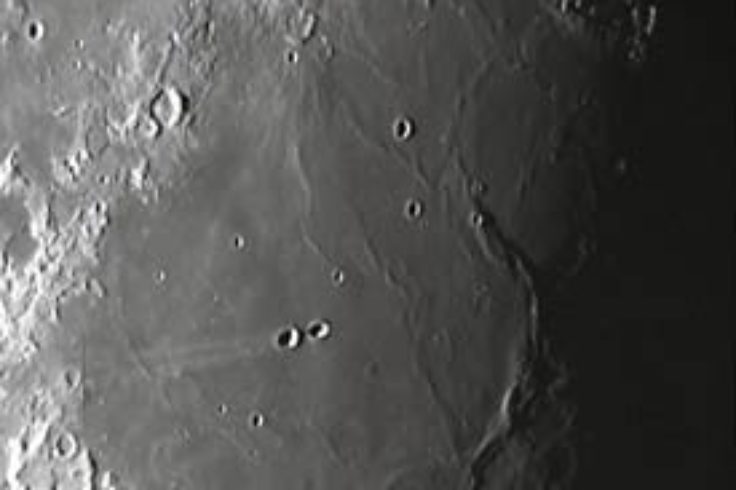