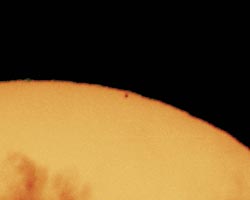 On Wednesday, May 7, 2003, whatever sunspots are visible on the Sun’s disk through a safely filtered telescope will be joined by something even blacker: the tiny silhouette of Mercury. The planet will spend more than five hours crawling slowly across the northwestern corner of the solar disk. Skywatchers throughout most of Europe, Africa, and Asia can see the entire event unfold. Some of this transit can be witnessed from Australia, Japan, and Alaska before sunset, and the northeastern parts of North and South America just after sunrise.

No matter where on Earth you live, Mercury will start forming a dent on the Sun’s limb within two minutes of 5:13 Universal Time. This occurs near the north point on the Sun’s disk, at position angle (p.a.) 15° or 16° eastward along the limb. By about 7:52 UT Mercury will be some 12' from the Sun’s center, or 4' inside the northwestern edge (see the diagram on the next page). The planet finally leaves the Sun at around 10:32 UT at p.a. 290° or 291°.

Skywatchers who like to look at sunspots with a telescope are already equipped for transit observing. For direct views, a safe solar filter must cover the entire entrance aperture of the telescope, protecting both it and your eyes from the Sun’s blinding intensity. Solar filters come with some telescopes as accessories, or they can be purchased from third-party dealers.

Alternatively, you could do what French astronomer Pierre Gassendi did when he observed the first transit of Mercury ever predicted — that of November 7, 1631. Gassendi let sunlight pass through an unfiltered telescope to form a magnified solar image on a card several inches behind the eyepiece. For more tips on this simple projection technique, and about safe viewing methods in general, visit The Sun section of this Web site.

If you live outside the transit zone or if your sky is cloudy, you can follow the transit on the Internet. Numerous organizations plan to webcast the event; a few are listed below.

During the transit there are four instants when the disks of Mercury and the Sun are tangent to each other — making contact at a single point. Contacts I and IV are the instants of external tangency, but experience shows that these cannot be timed accurately. Contact I tends to be recorded late, and IV a little early, because a tiny portion of Mercury’s disk must overlap that of the Sun to be seen at all. For this reason observers usually concentrate on contacts II and III, the instants of internal tangency.

At contact II a stage is reached when Mercury appears fully entered upon the Sun, but light is not yet visible all the way around the planet. For another 20 or 30 seconds the planet resembles a black drop attached just inside the Sun’s limb. Then suddenly the black drop breaks away from the limb, and a thread of light is seen between the planet and the Sun’s edge. This is the moment that observers should time as contact II. A similar sequence of events takes place in reverse order at contact III as Mercury begins moving off the Sun’s disk.

It was English astronomer Edmond Halley who first described the black-drop effect in 1677, and it convinced him that contacts II and III could be timed to the nearest second. Of course, poor seeing and instrumental variations play a role. When Joseph Ashbrook analyzed 248 timings submitted to Sky & Telescope from the transit of November 10, 1973, he found that 81 percent of the timings at these two contacts were consistent within ±20 seconds (S&T: January 1974, page 4). Fortunately, psychophysical effects on the timings of Mercury’s entry tend to offset and cancel those at exit. That’s why simple visual timings with small telescopes, over four centuries, have proven so powerful for pinpointing Mercury’s location in space.

Almost anywhere in Europe, Asia, and Africa on May 7th, observers with clear skies and safely filtered telescopes should be able to see the entire transit. Only the beginning or end of the transit is visible from parts of the Americas and Australia.

To explore these effects further and help in planning future transit articles (see the next page), Sky & Telescope seeks contact timings made on May 7th. Carefully adjust your watch to the nearest second using time signals from a shortwave station like WWV at 10, 15, or 20 MHz, or CHU at 7.335 or 14.670 MHz. In your report, please include your latitude and longitude to the nearest arcminute, telescope aperture, and the magnification or the diameter of the projected solar disk used in making the timings. Send reports by e-mail to [email protected].

Timings are also sought by John Westfall Jr. (P.O. Box 2447, Antioch, CA 94531-2447, USA; e-mail [email protected]). As transit coordinator for the Association of Lunar and Planetary Observers, he would like to receive drawings of the black drop and other optical phenomena, still photographs (digital or film), and NTSC videos for analysis. Westfall’s campaign to observe Mercury’s last transit was of special interest because that event was a rare, grazing type ( S&T: November 1999, page 108. "I received numerous timings from the US, a few from Argentina, but unfortunately none from the critical graze region of Australia–New Zealand," he writes. "They apparently had bad weather throughout."

The following table is a compilation of three more-detailed tables that appear in the May 2003 issue of Sky & Telescope. Civil times are given throughout, including daylight-saving ("summer") time when in use. Note that for Alaska (just east of the International Date Line), the transit takes place before sunset on the 6th. For locations where the Sun rises with the transit in progress, Mercury will already be visible as a black speck on the solar disk.

For contacts I and IV, the table gives the vertex angle of Mercury (measured counterclockwise from straight up on the solar disk) and the Sun's altitude above the local horizon.

This is the first of 14 transits of Mercury to take place during the 21st century. It's also the first transit to occur in the month of May in more than three decades. Mercury’s transits occur in May or November, but in no other month, because the planet’s orbit plane is inclined 7° to that of Earth, and the geometry is then favorable for an exact lineup. Moreover, Mercury reaches the aphelion point in its orbit (farthest from the Sun) on May 18th this year. Thus the planet shows a relatively large disk, 12.0" across on May 7th — slightly larger, in fact, than Venus and Mars on that date. During a November transit the situation is reversed: Mercury is near perihelion (closest to the Sun), and its diameter never exceeds 10.0".

Mercury’s next transit of the solar disk favors observers in Pacific Rim countries. This event takes place in 2006 on the afternoon of November 8th in the Americas, and the morning of November 9th west of the International Date Line.

Yet for many observers this May’s transit is a warm-up session for a far grander spectacle, one that no person alive today has ever seen. The planet Venus will cross the disk of the Sun on June 8, 2004, for nearly the same regions of the Earth, and at the same time of day, as does Mercury on May 7, 2003. Compared to puny Mercury, Venus’s silhouette will appear five times wider and 23 times bigger in area — producing a fairly obvious naked-eye "sunspot"!