Acquired in November 2000 by the Hubble Space Telescope, this image shows Saturn and its rings in all their glory. South is up to match the view in an astronomical (inverting) telescope.

During the night of January 4–5, North American observers are well positioned to watch a rare event — Saturn transiting the face of M1, the Crab Nebula. But once Saturn, at magnitude –0.4, encroaches on the 8.4-magnitude Crab, will there be anything of M1 left to see?

Not likely, according to S&T contributing editor Fred Schaaf. In the January issue of Sky & Telescope he writes: "Unfortunately, the planet’s glare and scattered light in a telescope will hide the dim nebula. Saturn’s surface brightness is 250,000 times greater than that of the Crab, which is 6 by 4 arcminutes in size, nearly 10 times wider than the length of Saturn’s rings."

Rick Baldridge, a member of the International Occultation Timing Association (IOTA) disagrees. In the Peninsula Astronomical Society [California] newsletter for December 2002 he states: "It doesn't seem so far-fetched to see a 0-magnitude planet near an M-object. Back in 1982, I saw a 4-day-old Moon pass between the Lagoon Nebula (M8) and the Trifid Nebula (M20) using a 5-inch f/6 refractor with a 20-mm eyepiece (about 38x) and a nebula filter. I was astonished that with that much moonlight, the nebulae would be visible, but they were. I think it will be rather easy to see Saturn transiting the Crab Nebula — with the use of a nebula filter." 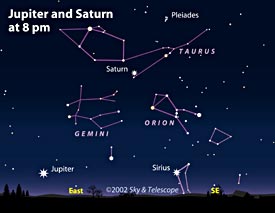 Two planets shine brightly in the evening sky this winter. To find Saturn (and Jupiter), face east around 8:00 p.m. in early January and match this chart to the star patterns you see in the sky.

But why not take a look to be sure? The passage of a planet across a nebula is so rare that few observers have ever witnessed such an event. Saturn will be in the middle of its traverse across the Crab at roughly 23:00 Universal Time (6:00 p.m. Eastern Standard Time) on the 4th. Perhaps a more interesting observing challenge will be following Saturn's largest moon, 8.4-magnitude Titan, as it makes its way across M1 during a 24-hour period beginning at approximately 2:00 UT on the 5th. Note that Titan will pass only 20 arcseconds north of the Crab's central pulsar at about 14:00 UT on the 5th.

And how close to Saturn can you detect the Crab Nebula? You can easily locate its position for a week or two before and after January 4th by remembering that Saturn is moving westward against the stars by about 4.5 arcminutes (6 ring-lengths) per day.