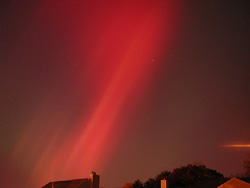 The sky over Boston glowed red early Thursday evening (October 30th), thanks to an impressive aurora display generated by a powerful solar flare. Sky &Telescope editors Imelda B. Joson and Edwin L. Aguirre used a Coolpix 990 digital camera at f/3.5 (ISO 200) and an 8-second exposure to capture this image from their light-polluted driveway northwest of Boston. 'At the peak of the display,' noted Aguirre, 'it was as if the sky was on fire.'

For the second time in the last few days, a powerful flare on the Sun triggered an unusual display of the aurora borealis over some of the world's midlatitudes. Skywatchers in North America and northern Europe — alerted by news that a major blast of solar wind was barreling into Earth's magnetic field — witnessed luminous displays of red, green, and white in the evening sky after darkness fell Thursday (October 30, 2003).

In the Boston area, home of Sky & Telescope, tall red rays slanted across the sky and changed shape and intensity almost from moment to moment. Sometimes everything vanished for many minutes. Then the rays would return, mingling with green and occasionally converging to a grand corona formation near the zenith.

The chain of events that led to the auroras began with a powerful solar flare in the huge active sunspot region 10486 (also called 486). This is the southernmost of the two giant spots that are currently visible on the Sun's face with the protected naked eye. In fact 486 (lower right in the image below) is the largest sunspot region to appear during this entire 11-year solar cycle. The other group, farther north, is named 10488. 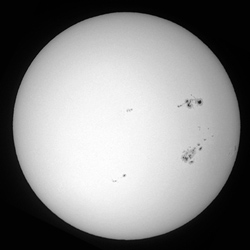 This white-light image, acquired on the morning of October 31st, shows the two gigantic naked-eye spot groups heading toward the western (right) limb of the Sun. The double spot nearest center is Active Region 10488; the one below it is 10486, which blasted Earth with a coronal mass ejection in the early evening hours of Thursday the 30th.

The flare (rated X11) began at 3:49 p.m. Eastern Standard Time (20:39 UT) on Wednesday the 29th. It spewed a coronal mass ejection (CME) whose leading edge swept past Earth around noon Thursday Eastern Standard Time (17:00 UT), buffeting the Earth's magnetic field and filling it with energetic charged particles. When such particles come streaming down the Earth's magnetic field lines, they make the uppermost regions of the atmosphere fluoresce.

This was the second major solar flare, CME impact, and auroral display in just a few days. An earlier blast of solar wind swept by Earth and lit night skies in the early morning hours of Wednesday, October 29th. That blast also began with a major flare in sunspot 486. Skywatchers as far south as California, New Mexico, Texas, and Florida got grand displays that night.

The two naked-eye spots are actually the second and third to appear during the current spot outbreak, which began on October 18th. The first, 10484, has rotated out of view around the Sun's western limb earlier in the week but was an easy sunspot to view without optical aid.

Sneezing at the Full Moon 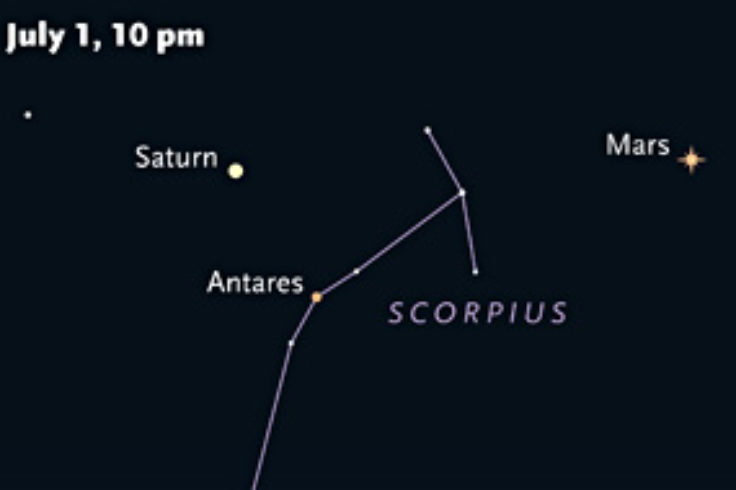