The Closest Whiz-by of Toutatis

Maybe a nervous friend, knowing of your interest in astronomy, has already asked you about the latest e-mail chain letter: a killer asteroid being tracked by astronomers has a 63 percent chance of smashing into Earth this fall, and the authorities, of course, are hushing it up. 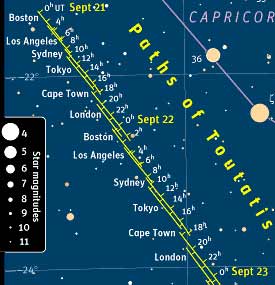 Toutatis heads south across Capricornus, in view from most of the world, just before its closest approach to Earth. These finder charts (above and below) show its exact path for five nights as seen from various sites worldwide; choose the city closest to you, or interpolate. Each track segment begins at local dusk and ends when Toutatis sets, with times and dates given in Universal Time. Click on each chart for an expanded view. Stars are plotted to 11th magnitude; Toutatis brightens from magnitude 10.7 to 9.7 between the 21st and 25th.

You can tell your friend not to believe chain letters. But there’s a grain of reality here that will offer a fine observing challenge for telescope users in late September, especially in the Southern Hemisphere.

The object is genuine: it’s the near-Earth asteroid 4179 Toutatis, discovered in 1989 in France and named for the ancient Gallic/Celtic god by whom characters swear loud oaths in the French Astérix le Gaulois cartoons and comic books. Amateur astronomers followed the fast-moving little body during two previous flybys of Earth (Sky & Telescope: December 1992, page 673, and December 1996, page 76). In 2004 Toutatis is about to make its closest predicted pass yet, scooting a very safe 1.5 million kilometers — four Earth-Moon distances — south of Earth on September 29th. Indeed, after taking planetary perturbations into account, astronomers have determined that this year’s flyby distance is Toutatis’s closest approach at least as far back as 1353 and the closest until at least 2562.

Toutatis will be at its brightest, about magnitude 8.9, on September 28th. Unfortunately for most readers, it will then be crossing the far-southern constellation Telescopium; Southern Hemisphere observers will find it nicely placed high in the evening sky. A few days earlier, however, Toutatis will be as bright as 10th magnitude while visible practically worldwide — in southern Capricornus, due south in midevening. Anyone with at least a 4-inch telescope will have a good shot at it.

Toutatis heads south across Capricornus, in view from most of the world, just before its closest approach to Earth. This finder chart shows its exact path for five nights as seen from various sites worldwide; choose the city closest to you, or interpolate. Each track segment begins at local dusk and ends when Toutatis sets, with times and dates given in Universal Time. Stars are plotted to 11th magnitude; Toutatis brighten from magnitude 10.7 to 9.7 from September 21st to 25th.

The problem will be locating the speedy little point. When closest, Toutatis will race across the sky at 30° per day, making it impractical for us to print sufficiently detailed finder charts for that time covering more than a few hours. Instead, the charts above cover September 21st through 25th Universal Time (including the evenings of September 20th through 24th in the Americas), when the asteroid is moving more slowly and is still visible from most of the world. During these five days it should brighten from about magnitude 10.7 to 9.7, as it nears from 8 million to 4 million kilometers. During the evening of the 24th, North American observers will be able to see two good occultations; one along the east coast and one over the Rocky Mountains.

On September 29th, Toutatis makes its closest approach to Earth, at which time it happens to pass within 1° of Alpha Centauri for observers in Australia and New Zealand. At this time of year Alpha spends most of the night below the south celestial pole, so a good southern horizon will be needed. Toutatis will be moving at its greatest apparent speed, nearly 1.5' per minute of time, making it fairly easy to identify the 10th-magnitude visitor in a telescope each time it goes by a background star. The neighborly visit does come at the time of full Moon and all its glare. It’s fortunate for would-be observers that Toutatis and the Moon are well apart in the sky.

There’s another complication. The asteroid will pass so near to us that your location on Earth will affect its apparent position on the background sky. This topocentric parallax may shift the asteroid’s track as much as 0.1° away from the standard, geocentric track calculated on the charted dates for a hypothetical observer at the center of the Earth. That’s partway across a low-power eyepiece’s field of view. The tracks on the map show the exact paths as seen during evening hours from several cities around the world. Fortunately, Toutatis’s rapid motion against the stars — from 3 to 10 arcseconds per minute on the map’s dates — should betray it in the eyepiece soon enough.

Skywatchers with telescopes in Australia and New Zealand will have a fine view of Toutatis racing past Alpha Centauri. Stars are shown to magnitude 10.

If you want to catch Toutatis on other dates, or create an exact chart for your location (by plotting on a detailed star atlas such as Uranometria 2000.0 or the Millennium Star Atlas), you can get a list of positions from the IAU Minor Planet Center’s ephemeris service. (Instructions: Use Internet Explorer only. Choose “Return Ephemerides.” For name, enter Toutatis. Enter the starting date for your list of positions in the form 2004 09 22 0633 if you want, for instance, 6:33 Universal Time Sept. 22, 2004. Be sure to enter east longitude, not west; if you know your west longitude, subtract it from 360° to get east. (For example, 90° W in the middle of North America is 270° E.) Enter a north latitude as +, a south latitude as –. Under Format, choose None.)

The asteroid 4179 Toutatis turned out to be long and lumpy when Steven Ostro and colleagues got radar images of it during a flyby in December 1992. These views are spaced 6 hours apart.

Toutatis follows a four-year, eccentric orbit that carries it from the asteroid belt to just inside the orbit of Earth. It travels around the Sun in nearly the same plane as Earth, so close flybys are frequent. Nevertheless, radar ranging by Steven Ostro (Jet Propulsion Laboratory), Scott Hudson, and others has pinned down Toutatis’s orbit so precisely that we know for certain that it will not hit Earth during at least the next 65 years, and that the chance of a collision is extremely minuscule for at least several centuries after that.

Ostro’s radar observations have also mapped its three-dimensional shape in detail. Toutatis is an extremely irregular, almost bowling-pin-shaped body 4.6 by 2.4 by 1.9 km in size. It may be two or three large rocks resting against each other with rubble filling the chinks. Ostro’s group also discovered that Toutatis is slowly tumbling in a complex manner. It rotates with a period of 5.41 days around its long axis, which in turn precesses around another axis every 7.35 days on average. As a result, the Sun and stars careen around the Toutatian skies in patterns that never repeat.

This kind of tumbling is expected after asteroids collide. All minor planets probably behaved this way in the past, but centrifugal force and internal friction have “worked” most of them into simple rotation, around a fixed axis aligned with the asteroid’s shortest physical axis. Most asteroids rotate with periods of about 5 to 20 hours. But Toutatis turns so slowly that the “damping time” for its weird gyrations is greater than the age of the solar system. Ostro and his colleague Scott Hudson have said, “The rotation of Toutatis is a remarkable, well-preserved relic of the collision-related evolution of an asteroid.”

Ostro’s group plans to carry out more radar observations during September’s flyby. They expect to measure the distance between Toutatis and the Arecibo radio telescope in Puerto Rico to within a few tens of meters. That should be ample precision for measuring a 6-km displacement expected in the asteroid’s distance due to the Yarkovsky effect, which arises from the absorption and reradiation of solar heat (S&T: April 2004, page 22). Because the size and shape of Toutatis are so well known, “we will constrain the mass by means of the Yarkovsky perturbation since the first radar observations” in 1992, says Ostro. Thus, “We will get bounds on its density.”

The radar ranging will also yield an even better orbit, probably adding more centuries of not having to worry about a collision.