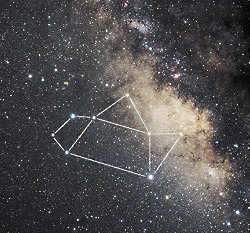 The Large Sagittarius Star Cloud seems to rise like steam from the spout of the Teapot pattern. Nearby are a pair of Cepheid variables — see the chart below for their exact location.

Several thousand variable stars have been identified and named within Sagittarius alone, which is not surprising given the number of stars we see as we look toward the Milky Way’s core. One of the brightest of these variables can be followed with the naked eye — night after night — as long as the constellation isn’t too low in your sky.

The star is X Sagittarii, and while it is relatively close to us (at about 1,000 light-years) it happens to lie only 1° from our line of sight to the Milky Way’s center. Being readily visible without a telescope, this star was already known by the designation 3 Sagittarii when its variability was discovered by German astronomer J. F. Julius Schmidt (1825–84). It's a Cepheid variable, meaning it belongs to the important class named after Delta Cephei. (That star’s fluctuations were first detected in 1784 by English amateur John Goodricke, another great pioneer of variable-star astronomy.)

What makes Cepheids so special is that they exhibit a distinct relationship between their period and their intrinsic luminosity. By measuring a Cepheid’s cycle time, which can range from less than a day to more than two months, astronomers gain an excellent indication of how far away it is. That’s why one mission for the world’s largest telescopes is to identify Cepheids in our extragalactic neighbors. Cepheids have become important as “standard candles” for gauging the size of the universe.

Our target star lies roughly halfway between 3.0-magnitude Gamma (g) Sagittarii, the spout of the Teapot, and 3.3-magnitude Theta (q) Ophiuchi. The chart (above) will be helpful for keeping track of its brightness changes. X Sagittarii ranges from magnitude 4.2 to 4.9 and then back to 4.2 in almost exactly seven days.

While X Sagittarii can be followed with the unaided eye throughout this entire cycle, I’ve found that using binoculars, or even the finder of my telescope, makes estimating its brightness easier, particularly from suburban skies. As with all Cepheids, observing every clear night is recommended for obtaining a good picture of the star’s light curve.

From Buenos Aires, Argentina, Sebastián Otero made 20 naked-eye estimates of X Sagittarii's brightness in 1997. They are folded together using the star's known 7.01-day period. Note that the star rises more abruptly than it fades, a hallmark of all Cepheid variables.

X Sagittarii is one of a dozen or so Cepheids that have a peak apparent brightness of 5th magnitude or better. Amazingly, one of those other bright Cepheids, W Sagittarii, lies in the same binocular field — so you can follow two naked-eye Cepheids at once! The period of W is 7.59 days, compared to 7.01 days for X .

The lure of variable-star observing hooks many amateurs. The 1,000+ membership of the American Association of Variable Star Observers (AAVSO) is just a subset of amateurs around the world who maintain an interest in these stars. At the very least, you might now be tempted to keep an eye on the pulse of X Sagittarii on nights you observe in and around the heart of the Milky Way.