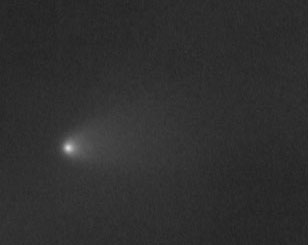 This infrared image — a stack of 799 frames — was captured during broad daylight.

At latitude 42° north, Sky & Telescope's offices are fairly well placed for viewing Comet McNaught. And since we're in the eastermost major city in North America, we get to see the comet slightly ahead of most of our readers. Here are some of the observations made by S&T editors.

Assistant editor Sean Walker made an excursion to Wright's Tower in Medford, MA, to capture one last view of the comet from northerly locations. Local weather cooperated briefly to treat a few adventurous observers he met on Pine Hill to a splendid sight shortly after sunset. "By 4:50 EDT, we were able to see the comet without aid, sporting a 2-degree tail pointing straight up and curving slightly towards the right. Everyone present noted how the comet would shine through the low clouds skirting our western horizon".
I suspect observers in the Southern hemisphere will be treated to a better show next week.

Sean Walker photographed the comet in broad daylight from his home in southern New Hampshire using a 7-inch Mak-Newt and a Lumenera LU075 camera. He was able to capture a substantial chunk of the comet's tail in visual wavelengths, but his most impressive image — shown at right — was taken through an infrared filter. Shortly after, he took a look through the telescope with his own eyes. He reports that the coma was bold and obvious, and he could even see a hint of the tail.

A gaggle of S&T editors, artists, and significant others gathered in the park across the street to observe the comet. Dennis di Cicco picked it up in an 80-mm refractor just 7 minutes after sunset, and by the end of civil twilight it was readily visible to the unaided eye, with a bright 1° tail. Tony Flanders was busy working on our website, and to his chagrin, he arrived too late to field-test his own directions. To compensate, he tracked the comet through binoculars until its tail was sticking up out of the trees, with its head a half degree above the theoretical horizon. 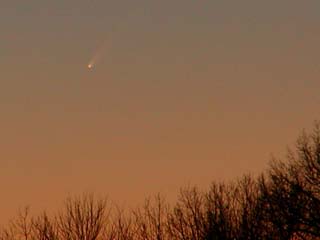 At the same time, Roger Sinnott, who posted our initial observing guide was observing the comet from a playground near his home in Boston's northwestern suburbs. His photograph is shown at right.

Clouds had foiled Dennis diCicco's previous attempts to see Comet McNaught, but a spur-of-the-moment observation provided a view that will go into his personal record book: "Using a Tele Vue NP127is refractor [5 inches aperture] on an Astro-Physics Mach 1 Go To mount, I was able to view the comet in broad daylight. I couldn't see the comet at 19X, so I switched to 75X and made a second slew using slightly more accurate coordinates. At first glance I didn't notice the comet, but the second I moved the scope a bit with the slow-motion controls it stood out. It was very compact, but clearly more diffuse than the pinpoint image of Altair. After swinging back and forth between the star and comet a few times and racking the star out of focus to mimic the comet's appearance, I'm confident that the part that I could see was fainter than Altair."

Tony Flanders found the comet after trying and failing on one previous morning and two previous evenings. He concluded that it's bright, gorgeous, and easy to see. . . as long as you have a completely unobstructed horizon and perfect conditions. Even the thinnest, barely visible wisps of clouds nearly blocked the comet from view.

He kept careful notes about time, because he was curious about the tradeoff between sky darkness and comet altitude. He reports: "In fact, my best view by far was the first one, at 6:28 a.m., when the Sun was 8.5 degrees below the horizon and the comet was just 1.5° above the theoretical horizon. Four minutes later, with the comet and Sun just 3/4° higher, the sky was much brighter, and the comet's tail much less spectacular. As time progressed, the tail started to fade through my 70-mm refractor, but it remained pretty obvious in my 10x30 image-stabilized binoculars. When I left at 6:50 a.m., with the Sun at –4.5° and the comet at +5° altitude, the comet was still plenty visible through the binos, but very hard to pick up again once lost — a little like Venus in the daytime."