The Comet After Deep Impact 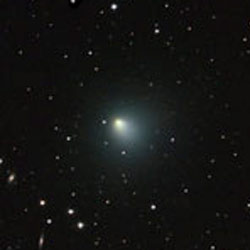 BEFORE THE HIT. Comet 9P/Tempel 1 was glowing at about 11th magnitude when Johannes Schedler in Austria imaged it on the evening of May 2nd. He used an SBIG STL-11000M CCD camera at the f/3 prime focus of a 16-inch Cassegrain reflector for a total exposure time of 40 minutes.

In the Jet Propulsion Laboratory mission control room, cheers and shouts of amazement erupted as Deep Impact's dazzlingly brilliant crash site burst forth on the gray, lumpy nucleus of Comet Tempel 1. Before, during, and after the impact, NASA TV, broadcasting live from mission control, was the most dramatic television to be found anywhere in the world.

But for most telescopic observers, 83 million miles removed from the action, it was another story. The sudden flareup that appeared so brilliant on the 5-mile-wide comet nucleus was mostly hidden in the unresolved glow of the comet's many-thousands-of-miles-wide coma.

And that was if you could see the comet at all. The first problem was merely finding such a dim target (see below). Typical of the reports from small-scope users was that posted by Karen A. Young of Wrightwood, CA, on the NASA/JPL amateur report page. She used a 6-inch f/8 reflector in which she could see stars to 12th magnitude. "Could not see comet visually, so watched the spot where the ephemeris predicted the comet to be," she wrote. "Comet did not brighten enough to be visible."

Even the 24-inch telescope sending a near-live webcast of Comet Tempel 1 from atop Kitt Peak in Arizona showed the comet's head brightening only modestly after impact as it slowly crept across the stars.

To visual observers with large telescopes and good skies, however, a change was definitely apparent. Comet expert Paul Weissman (NASA/JPL), observing with JPL's telescopes in Wrightwood, CA, was among many reporting that within 15 to 30 minutes of the crash, the innermost part of Tempel 1 brightened by almost 2 magnitudes — a factor of five or six.

The following was posted by Jeff Schroeder at Wrightwood:

"We had a successful view of the aftermath of the collision with our 18.5-inch f/7 Newtonian under 5.0-magnitude skies. The comet was NOT seen before the collision by two observers using magnifications from 70x to 350x. The sky was perfectly clear, but we had considerable interference from Los Angeles cityglow to the southwest. Two minutes after the predicted impact time, I saw a faint unstructured spot appear that was about 10 to 15 arcseconds wide. Ten minutes later, a starlike nucleus could be seen with averted vision at the spot's center. After another ten minutes, several of us could see the central point
easily with direct vision. The debris cloud brightened a little more by the end of one hour post-impact. Except for the central point, no structure was seen in the cloud and it appeared symmetric.

"Assuming that the comet was just below detection before the impact, I would (roughly) estimate that it brightened by 2 magnitudes in the first hour that we observed it. After that, we didn't see any further brightness increase, but it was getting lower and extinction and brighter light pollution were taking their toll.

"Even though this was about as faint and fuzzy as you can get, seeing it appear from nowhere as predicted was a real thrill! There was a lot of excitment in the dome, and a night to be remembered by all."

Elsewhere, observers at Ewell Observatory in Belmont, California, recorded the brightening; see their animation of a series of CCD images taken every 3 minutes with a 9-inch telescope.

Another fine movie was made by William Welsh and colleagues at San Diego State University.

Robert Sheaffer was with a group of San Diego Astronomy Association members "observing from reasonably dark skies in Tierra Del Sol, CA, about 75 miles east of San Diego, elevation 3,700 feet," he wrote in a sci.astro.amateur posting. "Before impact, I could see Tempel 1 in my 11-inch Celestron. It looked like a small fuzzy region, like a galaxy, no detail. You needed averted vision. Some observers couldn't see it even when it was pointed out to them. In a 24-inch Dob, the comet was easy but featureless." Several minutes after the impact time, "a small, starlike point of light appeared; we all agreed it hadn't been there before. We then looked in a 22-inch scope, and the little 'star' was even clearer, inside the comet's thin coma." 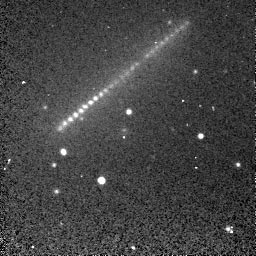 Look-back images from the departing flyby craft showed that new material was still continuing to emerge hours after the crash. On the other hand, brightness measurements by the distant Rosetta spacecraft showed that although the innermost part of Tempel 1 brightened by nearly two magnitudes in the first half hour, it lost two-thirds of this new brightness in the next 5 hours.

By the next night, July 4–5, visual observers were reporting that Tempel 1 was about a half magnitude brighter than before the crash took place. On the nights of July 5–6 and 6–7, observers' brightness estimates were ranging from about magnitude 9.2 to 11.0, as seen in scopes ranging from 3-inch refractors (under very dark skies!) on up.

By July 8th, observers were reporting that the bright new condensation in the comet's center was dissipating. Michael Begbie of Harare, Zimbabwe, described the view in 15x60 binoculars under an extremely dark, clear sky: "Comet now a difficult object again through this aperture... has now returned fully to the diffuse appearance that it had before the impact, and the coma appears spherical again visually, with no sign of an extension or any hint of tail." He estimated its total magnitude as 10.0.

Imaging with giant European Southern Observatory telescopes indicates that the impact did not create a long-lasting new active spot on the nucleus, and that after a few days the comet had "gone back to sleep."

Below is a pre-crash wrapup, followed by a finder chart for the comet and instructions on how to use it.

In the weeks before the impact, Tempel 1 had proved to be an unexpectedly tough target for amateur scopes, especially in any light pollution or summer haze. By the beginning of July the comet was running about a magnitude fainter than predicted. From the moderately light-polluted outer suburbs of Boston, I was unable to see the comet even using a 12.5-inch telescope at 60x, 75x, and 180x on the clear evening of July 2nd, one night before the impact. On the same evening, however, Daniel W. E. Green saw the comet using a 10-inch reflector from the darkness of Pack Monadnock Mountain in New Hampshire. He estimated its brightness as magnitude 10.6 and the diameter of its coma as about 2.5 arcminutes.

Other experienced observers were estimating the magnitude as anywhere from from 9.6 to 11.7, and the size of the coma from 2 to 12 arcminutes in diameter. Some people lucky enough to have crystal-clear dark skies were detecting it with 3-inch scopes.

Large observatory telescopes, meanwhile, had the comet under almost constant scrutiny. They caught it flaring up and ejecting material on June 14th and erupting with an even bigger jet on June 22nd. This event brightened the comet by almost two magnitudes, but only for a few hours. In the following days there were two more minor flareups of a few tenths of a magnitude lasting only an hour or two.

Where and How to Find It

Faint as it is, at least Tempel 1 remains conveniently located: in the southwestern sky immediately after dark, with Jupiter and Spica providing nice naked-eye landmarks for getting started.

Use the map below to locate the exact position to examine with your telescope on any night for the rest of July. Click on the map for the full-size version — the one to enlarge, print, and take to the telescope. This map is oriented with celestial north to the upper left.

Comet Tempel 1 is now moving eastward away from bright Spica in the evening sky. It's very faint; you'll need to use the faintest stars plotted here to pinpoint the exact position to examine with your telescope, as described in the text. And look immediately after the end of twilight, while this area is still fairly high in the sky. Click for better-quality image.

Comet symbols on this map are plotted for 0 hours Universal Time on the dates indicated, which is on the evening of the previous date local time in the Americas. The tails on the symbols point in the direction away from the Sun. Stars are plotted to magnitude 8.5, about as faint as a high-quality 50-mm finderscope will show. You will need to use the very faintest stars plotted in order to pinpoint the comet's exact location. If you don't enlarge the chart before printing it, bring a magnifying glass with you to read its finest details at the telescope.

The scale of the map is indicated by the declination ticks every 5° along the right-hand edge. A typical good finderscope shows a field of view about 5° wide.

(Note: if your finderscope has a right-angle bend at the eyepiece, it probably shows you a mirror image, which will not match the map. In this case, you can try to flip the star patterns on the map left-for-right in your head before comparing them with what you see. Or use one of the other solutions to the mirror-image problem described in our article "Using a Map at the Telescope".)

Look right after the end of twilight, while the comet is still as high as possible above haze and light pollution. (You can find your local end-of-twilight time by checking that your location and time zone are correct in our online almanac. If you're on daylight saving time like most of North America, make sure the Daylight Saving Time box is checked; if not, check it and and hit "Go" next to it.)

In the coming weeks, the comet will continue its southeastward trek through Virgo into Libra and Scorpius, passing Antares in early September. With its increasingly southern declination and its shrinking elongation from the Sun in our sky (73° by October 15th), observers in the Southern Hemisphere will be favored during this time. A chart of the comet's path through August and the first half of September is in the June Sky & Telescope, page 69.

When the fading comet finally disappears into the glare of the Sun late in the year, it will mark not only the end of a very special apparition but also the end of an era for this comet. Approaches to Jupiter in 2024 and 2036 will move Tempel 1’s perihelion distance from its current 1.5 a.u. to 2.0 a.u. Not until June 2122, when the perihelion distance shortens to 1.6 a.u., is the comet expected to again appear brighter than 11th magnitude.

Much more about the crash is at NASA's Deep Impact Web site. See also the mission's home site at the Jet Propulsion Laboratory. Check NASA TV for new reports and any scheduled replays of events on the big night.