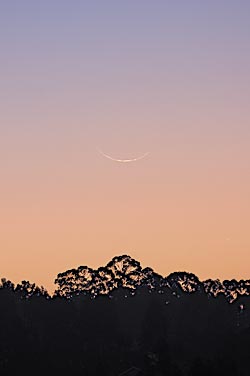 The waning crescent Moon was just 20.6 hours from new when Luis Carreira of Leiria, Portugal, caught it last October 13th at 6:12 Universal Time. The Moon was only 3° above the horizon, and the Sun was 7° below the horizon. He used a 90-millimeter f/5.6 refractor as the lens on a Nikon D70 digital camera; ¼-second exposure at ISO 200.

The crescent Moon in a twilight sky is always a beautiful thing, but when the crescent is very thin — a mere curling hairline — it looks positively eerie, almost supernatural. Perhaps this is because we see such a crescent so rarely. The thinner the Moon, the closer it appears to the Sun — so the more it’s hidden by twilight glow, atmospheric extinction, and obstructions near the sunset or sunrise horizon.

Few people ever see a crescent less than 30 hours old (less than 30 hours from the moment of new Moon) unless they plan for it. But much younger crescents can be sighted. Hunting them has long been an amateur-astronomy pursuit in the Western world, and it gets more attention in Islamic societies, where an actual sighting of the hilal (new crescent) determines the starting date of each month. Because the thin Moon’s visibility depends not just on astronomical factors but also on the clarity of the air and the visual acuity of witnesses, the start of the lunar month for a given region is not always predictable in advance.

The absolute limit of thin-Moon visibility is believed to be when the Moon is about 7° from the Sun. When the Moon is closer than this Danjon limit, none of its sunlit surface whatever should be in view, due partly to shadowing by irregularities on the lunar limb. But several other factors enter the visibility equation too. For the Moon to be as young as possible when seen, it should be near perigee (so it’s moving rapidly away from the Sun on the celestial sphere) and also near its greatest ecliptic latitude north or south (which increases its elongation from the Sun at a given age). Viewing from a high altitude helps greatly; the less air there is along your line of sight, the darker the twilight will be and the less the Moon will be dimmed by atmospheric extinction. These factors are explored in the comprehensive article “Seeking Thin Crescent Moons” from 2004.

The reliability of borderline crescent sightings can be a touchy subject, especially when the setting of the civil calendar is at stake, and we can’t claim to know the definitive world record. But in the opinion of many naked-eye viewers, the sighting to beat is the one made by Stephen James O’Meara at Mount Wilson Observatory in California on May 24, 1990. The Moon was just 15 hours 32 minutes old and 9.1° from the Sun.

In Pearce, Arizona, Matt BenDaniel recorded the Moon at dawn on October 15, 2001, only 30.8 hours before new. He took the 4-second exposure on Kodak E200 film with a 130-millimeter Astro-Physics refractor at f/6.7.

For sightings with optical aid, the record is apparently held by Mohsen Ghazi Mirsaeed of Iran, who used giant 40 x 150 binoculars at a carefully chosen mountain site on September 7, 2002. Mirsaeed held a tiny slip of crescent steadily in view for one minute when it was just 11 hours 40 minutes old and 7.5° from the Sun, very near the Danjon limit.

To explore the idea that the Danjon limit might actually be somewhat smaller, veteran observers James Stamm and John Polacheck drove up Mount Lemmon in Arizona before dawn on October 13, 2004. Armed with an 8-inch telescope and a plot of stars near the waning Moon, they both spied what they believe was the truncated lunar crescent at 13:30 Universal time. That was 13 hours 38 minutes before new (not a record for optical aid), but the Moon's elongation was a scant 6.5°! They hope to repeat such a sighting soon.

What is your own personal record? When will be a good time to try?

Where (and When) to Watch for Thin Crescents

Each month you can find the exact time of new Moon (which is defined as when the Moon and Sun have the same ecliptic longitude) in the table at the end of this article. Then find the first date when sunset at your location comes at least 11 to 15 hours after this time.

These are the best places to catch the year’s young crescent Moons. Given excellent sky conditions, the Moon can be seen if you’re left (west) of a visibility arc. The farther left you are, the less difficult the sighting will be. The arcs show where the Sun is 5° below the true (sea level) horizon and the Moon is 2.5° above the horizon, not counting atmospheric refraction. The small cross marks the most opportune position on each arc: where the Moon stands directly above the Sun and is therefore 7.5° from it, the Danjon limit. Marked at each cross is the Moon’s age at this point.

You’ll need an open view toward the horizon in the direction where the Sun goes down. Keep watch from shortly after sunset to shortly before moonset. You can find these two times for your location in the Almanac page on this Web site.

The map at left (click on the image to see the world view) shows the possibilities for noteworthy sightings this year wherever you live. The closer you are to the inside edge of a curve (shaded), the more outstanding the sighting you may be able to make — but the more difficult it will be. Far left across the map from each curve, the sighting will be easier. Of course, if you miss it, you should have much better luck 24 hours later!

For example, the evening of May 8th brings skywatchers in the American Midwest an unusual chance to look for a Moon only 16 or 17 hours old. West Coast observers, two time zones later, can try for the same Moon when it’s 18 or 19 hours old. From the mountains of Southern California, July 6th offers a Moon about 15 hours from new. Europeans can try to set less impressive personal records on June 7th and April 9th.