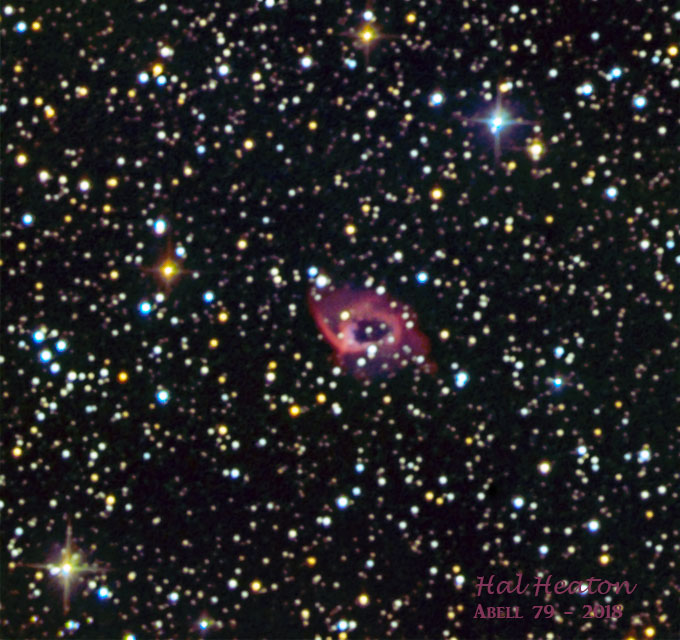 A robotic 0.61-m Planewave CDK24 reflector operating at f/6.5. The telescope was equipped with an Apogee CG-16M CCD camera and Astrodon Gen II (E-series) broadband LRGB and narrowband Ha and OIII filters. The camera’s pixels were binned 2x2 to provide a spatial resolution of 0.94-arcsecs/binned pixel.

Abell 79 is an enigmatic planetary nebula in Lacerta comprising an irregular and broadened oval-shaped ring from which faint oppositely-directed lobes emerge that have nearly vanished into the interstellar medium. A pronounced asymmetry is evident in the surface brightness of the northern lobe; its northeast side is much brighter than the other. (North is up and east is left in the image.) The ring, assumed to be circular, is inclined 49 degrees to the line-of-sight with its northern side approaching us relative to its center, and it is expanding at about 13 km/sec. Oddly, the faint central source (with a visual magnitude of about 17) is a relatively cool dwarf star that is incapable of producing the ionized species seen in its spectrum, suggesting that it has an unseen and hot companion. At a distance of 11,360 lys, the 10.6 x 10.0 arcmin field-of-view in the image spans approximately 35 x 32.9 lys. The data used to prepare this image were collected as unguided 1-min sub-exposures, which were integrated using CCDStack (CCDWare) to produce mean background-flattened images of 2.48, 1.73, 1.77, 1.12, 2.82 and 3.07-hrs duration in the L, R, G, B, H-alpha and OIII bands, respectively. Photoshop (Adobe) was used to blend the mean H-alpha and OIII images with the high-pass filtered Luminance image, and to blend the H-alpha image with Red and separately the OIII scene with both the Green and Blue frames. A new RGB image made from the results then colored the composite Luminance frame, and its color balance was adjusted to account for the resulting color distortion. Subsequently, the shape of the stellar profiles was altered to reduce distortions introduced by the lack of guiding, and the noise was filtered. After enhancing the contrast by applying a mild unsharp mask to the nebula, brightness gradients in the ring were emphasized by using soft-light to blend a selectively masked copy of the sharpened nebula with its full version. The processing was completed by increasing the saturation level of the brightest stars, and the sizes of the largest stars were puckered (reduced) to make a more attractive image.