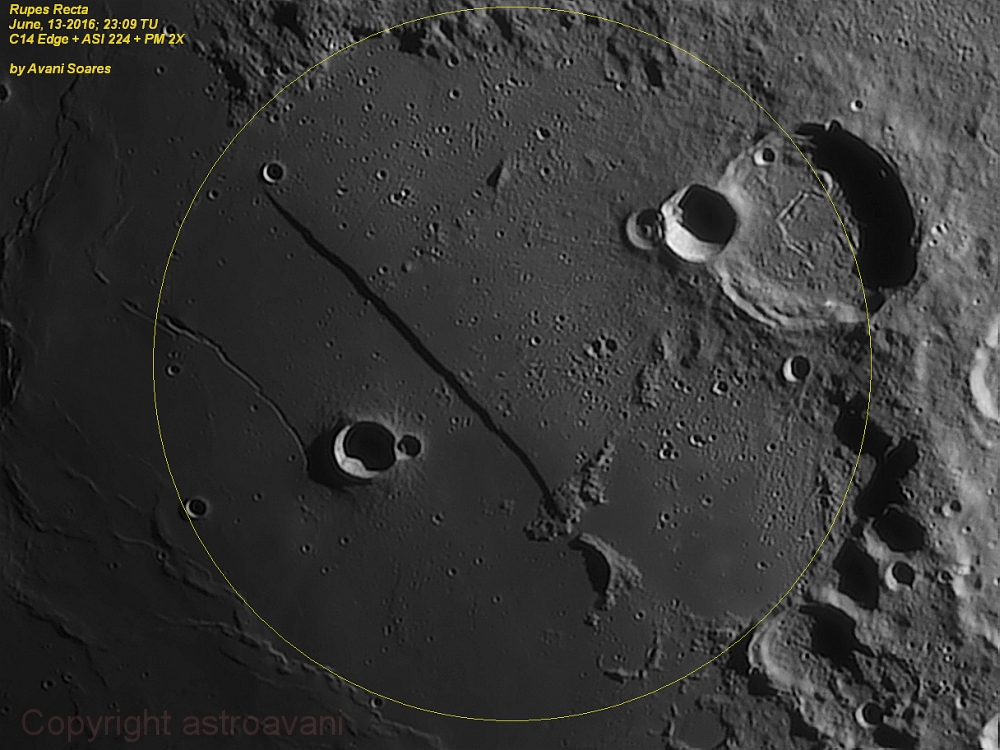 Several authors have reported that the escarpment is 250-300 meters high, but the latest measures by the projected shadow suggest it may be up to 450 m above the floor of the western basin. Despite appearances, the Straight Wall is not a cliff, although it is relatively steep, towering above the plain at an angle slightly greater than 20 °. The narrow part of the wall, (traditionally called Railway by British observers) is now officially known as Rupes Recta and ends in the south against a bunch of short ridges segments in the 17th century Christiaan Huygens selenógrafo compared to the hilt of a sword with the line straight wall with the blade. If you expand your vision, you will notice the slices of walls through the flooded floor of lava an old unnamed crater in ruins my friend Charles Wood calls "Ancient Thebit", and the very Thebit 57 km wide It is located on the right edge of the photo. The rim 200 km wide this ancient Thebit (indicated by the yellow line) is well defined, but its western border is marked only by wrinkle ridges arc-shaped. Although some researchers have noted that Rupes Reta is approximately radial to the Imbrium basin, and thus perhaps related to it, it is very evident that has a much closer relationship with the former Thebit. Wood believes that AntigaThebit was formed at the edge of Nubium impact basin and the west wall of the crater was eventually buried by lava flows that flooded the basin. This is essentially the same sequence that occurred in the sinus iridum Imbrium basin and Fracastorius the edge of the bowl Nectaris. A good portion of the Old Thebit floor gave way to accommodate the sinking of the basin. This is again very similar to Fracastorius, which is cut by a delicate slit where the floor sank. Finally, if you look carefully in good viewing conditions, you should see a small rille parallel to Rupes Recta, west and north of the bright crater Birt. Each end of this rille, known as Rima Birt, ends in a small cave called Birt "E" and "F". Rima Birt is a challenge for amateur observers and scientists trying to explain why he is there. Due to small cave at the north end of the rille stay near the edge of the Old Thebit, we can speculate that the fractures associated with the ring formed an easy path to the lavas erupted on the lunar surface, producing a dome collapses, a lava channel and perhaps a small deposit of ash and debris propelled by gas. Small craters indicated by capital letters, are satellite craters Birt and Thebit. Source: Charles Wood - Sky & Telescope Adaptation: Avani Soares